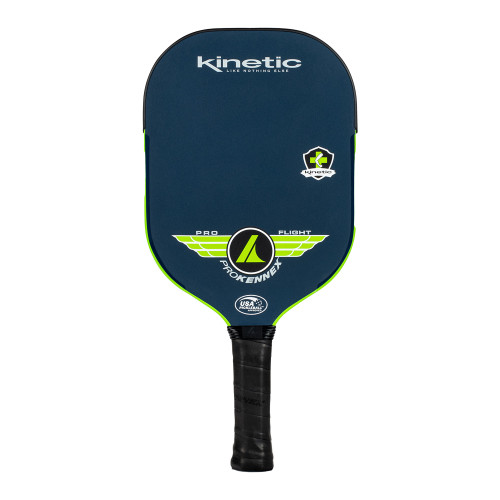 The Kinetic Pro Flight Pickleball Paddle brings fresh innovations to the ProKennex line with an emphasis on speed, placement, and improved durability. It uses a new Cloud Cell Core which is made to reduce the paddle’s weight due to wider spacing in the honeycomb design. A proprietary Diamond Frost coating on the surface produces tons of spin while resisting wear. In addition, the original Air-O-Guard system provides a fully replaceable edge guard, allowing players to swap out a single part rather than tossing the entire paddle if it gets scuffed.

The ProKennex Kinetic Pro Flight Paddle comes in two shapes, and this Pro shape is rectangular with a traditional size and width. The sweet spot plays slightly up the face like squared up paddles. The Flight Series of Paddles are lighter weight than ProKennex’s original releases, coming in at 7.3 – 7.6 oz. Players will enjoy increased speed and maneuverability, with less torque on their elbows. The handle length is 5” with a small grip. This paddle is ideal for reducing overuse injuries and “pickleball elbow” thanks to the manufacturer’s famous Kinetic System which uses tungsten-filled chambers to disperse energy evenly throughout the face. It has well-defined, squared edges for those who appreciate as much surface area as possible.

Kinetic Pro Flight Pickleball Paddle is an innovative piece of equipment that offers excellent control with less chance of injury.

Actual grip circumference may vary up to 1/8".

Please note: Due to the edgeless design, this paddle may develop wear to the graphic overlay and/or small chips at the edges during play. The Air-O-Guard bumper edge guard will mitigate much of this wear; however, the potential for it to occur remains. Our testers have also reported a small degree of wear on the finish/texture on the faces of these paddles. This normal wear and tear is not considered a defect in the product, and does not diminish the performance or playability of the paddle. In our own internal testing, after hundreds of hours of play, the paddles hold up exceptionally well without any change in play. Consider these scrapes and wear as a badge of honor, earned by hours on the court! 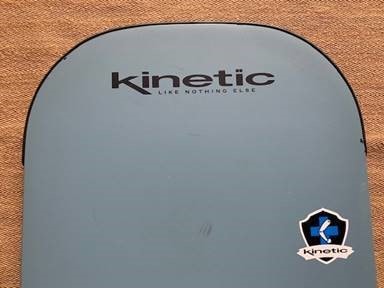 "ProKennex continues to drive performance with technology. The ProKennex Pro Speed Flight paddle has the same energy absorption technology of the original paddle, to help prevent injuries. This technology is famous in the tennis world, and set a new standard for paddle technology when introduced for pickleball paddles. ProKennex has added new core and face technologies that take the performance of this paddle to a new level. The core is lighter and yet more powerful – an impressive feat to pull off. That means the put away shots were jumping off my paddle. To go with more pop, the paddle now has a new face texture, so enhanced spin has been added to the ProKennex Flight paddle performance. My cut shots really skipped and gave my opponents fits. The Sweet Spot remains a little higher up the paddle on the rectangular shaped Speed version, great for people wanting a more traditionally shaped paddle. The consistency shot to shot made my kitchen game feel totally in control. The changes to this paddle make it more accessible for players who like a solid light/middleweight paddle."
John, Sales Team (4.0 Player)

"As someone who has battled intense 'tennis elbow' problems, I fell in love with the first generation Prokennex Pro Speed paddle. I had three (very) minor complaints with that original model, and this new Flight version addressed all three of my desires. First, it's lighter. My test model was 7.4 oz (vs. the 8.0 ounce first generation version.) Lighter paddles put less strain on your elbow, and give you faster hand speed in kitchen volley exchanges.
Second, I wanted an edge protector for the amazing carbon fiber perimeter frame on the paddle. The Generation 1 version used 'training tape' to protect the edges, but this new Flight version uses something called the 'Air-O-Guard' which is a molded plastic bumper that does not interfere with the face. It's super cool looking, but most importantly it protects the carbon fiber frame. Picking balls close to the ground is incredibly easy with this thin core paddle that doesn't have a traditional bulky edge-guard.
Finally, the paddle generates a ton of power. I didn't like having to move up to an 8.0 ounce paddle to get the power and sweet spot consistency I like in a paddle, but wow, this Pro Speed Flight generates a ton of power for a lighter paddle. The sweet spot is generous, and I felt totally in control on all shot types (drops, dinks, blocks, drives, etc.)
This face texture on this paddle is astounding - the highest level of grit I've ever perceived on a paddle. Hitting cuts and topspin were very easy. This one is going in my bag and may end up my daily player!"
Edward, Product Team (4.0 Player)