Pickleball is a fantastic hobby for young players for the same reasons it's great for adults—the nature of the game is a strong equalizer which lowers the barrier to entry, both financially (for their parents) and from a skill-based perspective.

Many players have come to pickleball not only from other racquet sports but from non-sporting backgrounds entirely, which makes it ideal for kids who don't consider themselves particularly athletic. Bring the game to a school gym or community center, and time and again, we've seen young players take to the sport like it's second nature.

As noted by Beverly Youngren of the Carlsbad Pickleball group, 'While older competitors are often former tennis players looking for a sport that’s easier on the knees, young players often go the other way. They become confident at pickleball and move on to tennis.

Carlsbad Pickleball hosted their first tournament for youth in December 2016.

'We had other youths that wanted to play, but I had to cut it off because there [aren't] enough courts.'

At PickleballCentral we've seen this trend continue to grow as clubs open up enrollment to kids and start classes or leagues specifically for them. Even manufacturers have started to take note, with some businesses like Paddletek creating paddles specifically for younger players (see the Ranger).

We're always happy to see players of any age take up pickleball, but it's especially exciting to know the next generation will be bringing some fresh talent to the courts. 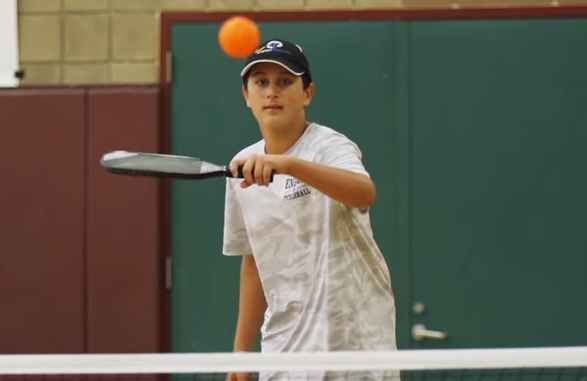 Younger players have already been engaging in more competitive events as well. One particularly fun example is that of 12-year-old Jack Munro, who won gold with 69-year-old JoAnne Russell in the 2017 US Open Mixed Doubles.

They were respectively the youngest and oldest competitors in the 19-49 group!

The USAPA launched a Juniors Division in 2016 which was kicked off at the USAPA Nationals VIII Tournament where the kids got a chance to play with pros. You can find additional resources and information on the USAPA site specifically for junior players or those interested in promoting the game to a younger demographic.

Check out some of the amazing play from these up-and-comers at the Nationals VIII Tournament:

From both official tournaments to local initiatives, we know pickleball can only benefit from more youth involvement.

If you haven't seen them yet, be sure to check out our articles on the Yavapai Detention Center and Ontario Pickleball Club. Both of these groups are great examples of local pickleball associations that have taken the initiative to provide healthy outlets to kids in their community.

We're glad that existing pickleball communities are welcoming young players with open arms. Do you know of any youth programs or leagues started up in your community? If so, let us know in the comments!