When a teacher and a sports trainer join forces, you know things will get done! Pickleball found its way into the Czech Republic thanks to a determined duo made up of US Open silver medalist Lenka Miši?ková and teacher/counselor Jodi Oppenhuizen. These two players have plenty of expertise between them and use a friendly yet consistent process for integrating the game into local communities. 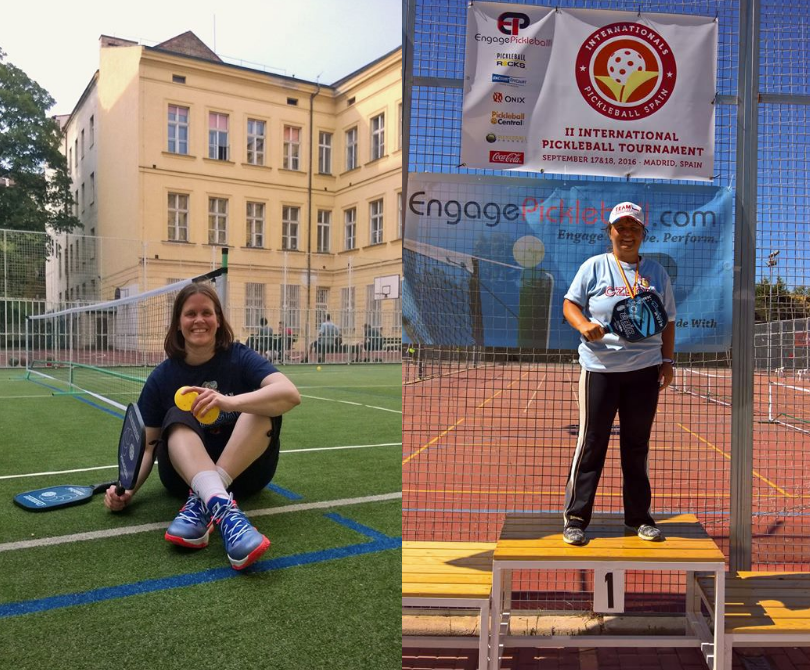 The first time pickleball found its way into the Czech Republic was in 2014 after Jodi was introduced to the game by her parents and learned to play in Michigan. She brought donated paddles and balls to the Christian International School in Prague where she works and started a pickleball club. Wanting more partners to play with, she also taught her friends about the game and created the Pickleball Czech Facebook page to share information.

A year later and worlds apart at the time, Lenka visited with a friend in Meadville, PA. There she was introduced to senior pickleball champion John Vicek. After sharing pictures from his matches, John and his wife invited Lenka to their home in Windsor, Canada to learn the game. Lenka quickly took to it, having been a ping pong champion in her teen years and an athlete her whole life. 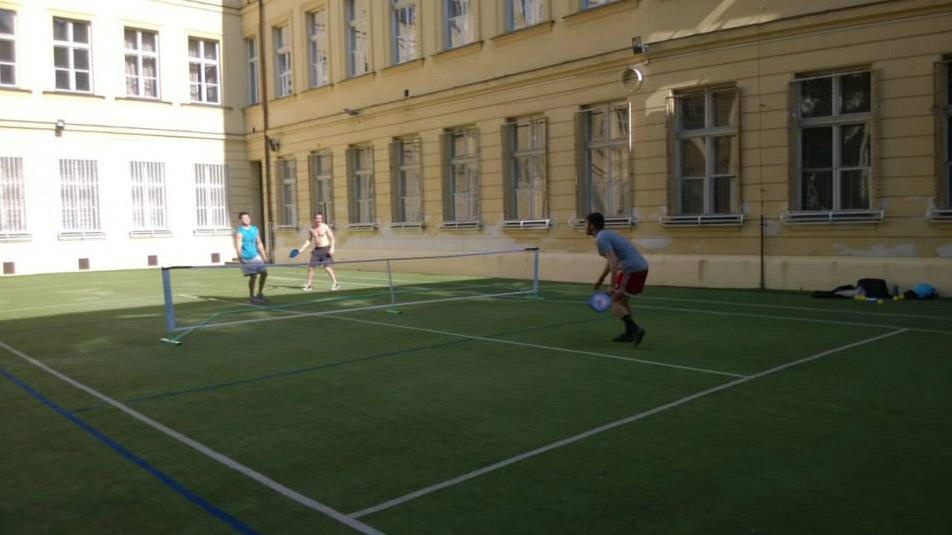 It was only last year (2015) that Lenka and Jodi crossed paths. Lenka contacted Jodi after finding out about her efforts through a mutual contact in Amsterdam. After falling in love with pickleball, she wanted to help spread the word about the addictive game.

Jodi lent equipment to Lenka so she could teach pickleball to kids at FIT Sports Club just south of Opava in Hradec nad Moravici, where she also trains them in ping pong, tennis, roller blading and floor ball (known in the U.S. as “floor hockey”).

Lenka’s first attempt was during the children’s summer camp, where they quickly became interested in the sport. As a follow-up, she continued to teach them pickleball during the 2015 – 2016 school year in the Czech Republic’s Moravian-Silesian region.

In spring 2016, Lenka purchased the domain for the Pickleball Czech website to better network with newcomers. Her and Jodi’s initiative was also strengthened by the head of the Ukraine Pickleball Association, David Conover. 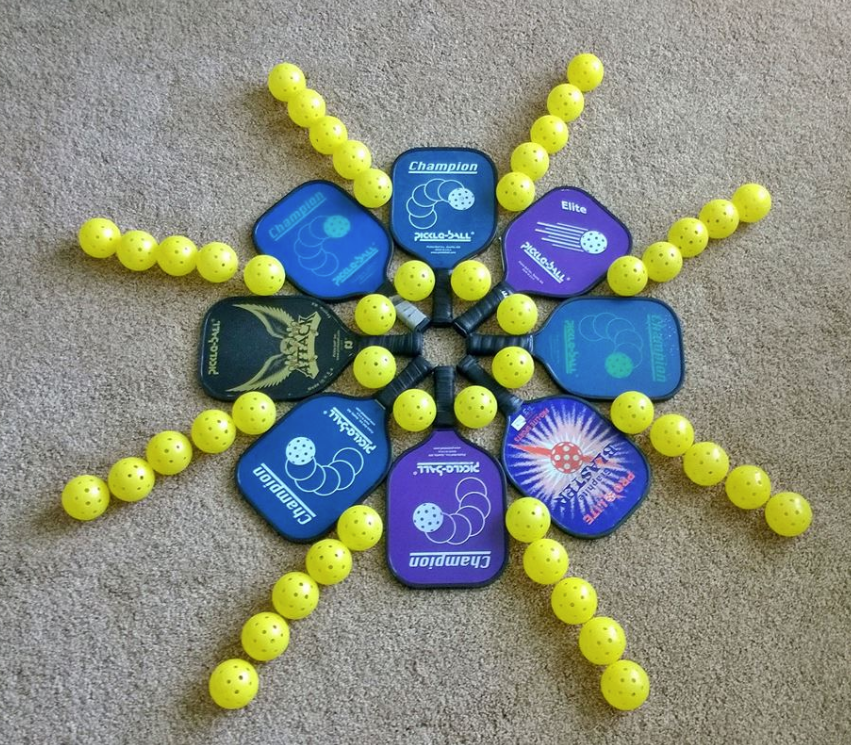 A star of donated pickleball gear!

In the following summer, Jodi participated in the Michigan State Games where she was recognized for her efforts to start pickleball in the Czech Republic. While there, she established a sister club relationship with the Grand Rapids Pickleball Club.

She also received support from Paddletek, Selkirk Sports and PickleballCentral when it came to acquiring more equipment, which is currently finding use on both sides of the country (Prague and Hradec nad Moravici)!

Despite having a decent amount of paddles and balls, one area where the Czech Republic lacks “equipment” is when it comes to the courts themselves. In fact, there are currently no pickleball-specific courts in the country. But Jodi and Lenka don’t let this slow them down!

“Although there are no courts that have been made exclusively for pickleball,” Jodi says, “there are many badminton courts. [Since] a doubles badminton court is the same size as a pickleball court, you can typically find a place to play indoors.”

Lenka adds, “[When] I train outside my house we just find level ground and use chalk for lines!”

When Lenka visited Jodi for the first time, they found another way to adapt to their surroundings. Jodi suggested they play pickleball on the Charles Bridge, one of the most famous tourist locations in the country. 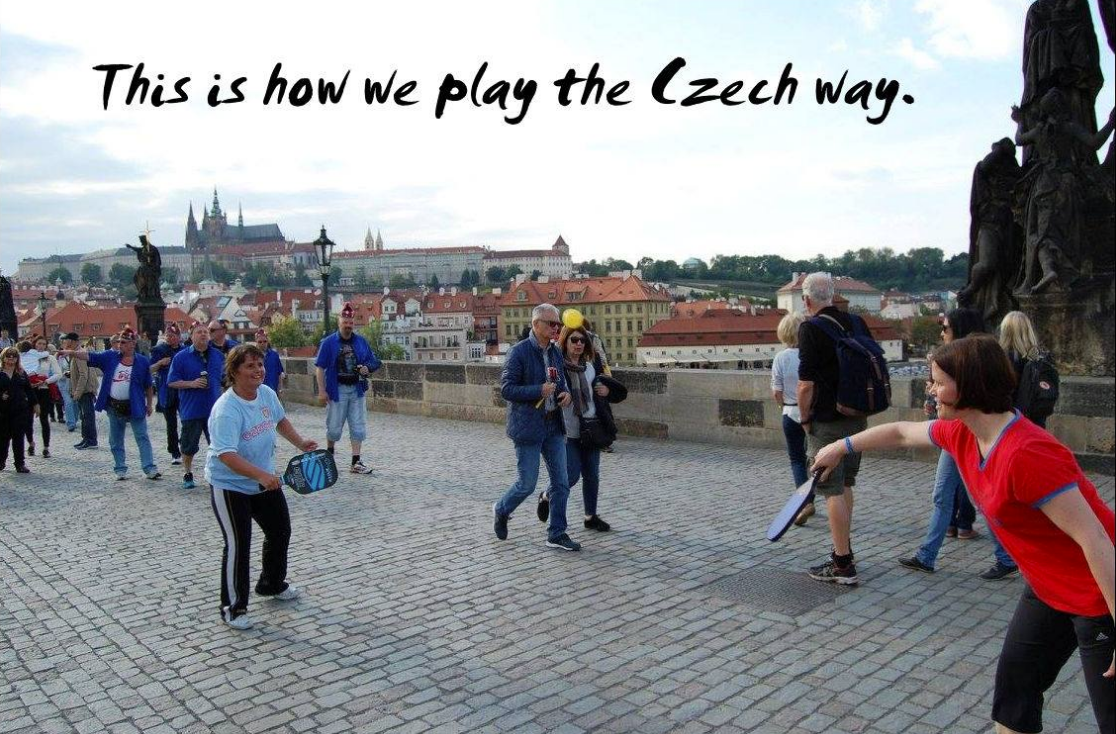 “And we did!” She confirms. “We played many other unusual places in the city and were able to talk to people from various countries about pickleball. I appreciate Lenka's humor and positivity.”

How’s that for pickleball guerilla marketing? No more excuses for not playing if you lack a “proper” court! Jodi shares another benefit of teaming up with Lenka aside from her open-minded attitude:

“She’s won several medals in tournaments, so it’s great to have an excellent Czech player in the country paving the way for future players.”

Indeed, it was Lenka who won the silver medal for women’s singles in the US Open. Amazingly, it was her very first pickleball tournament and she had to fight through an injury the whole way.

“The US Open was the first [pickleball] tournament in my life. I didn’t know what my level of play was, but because I have lots of experience in ping pong I felt I could adapt quickly. I had very good partners with me. In the women’s doubles we won 4th place and in mixed doubles we got 5th.”

“At the beginning of the second day my leg muscles started to hurt. I couldn’t take a step without intense pain. But because I’m great fighter I wanted to make it through to the end! I honestly have no idea how I won silver in those conditions. After every match I visited the tournament doctor who iced and bandaged my leg.” 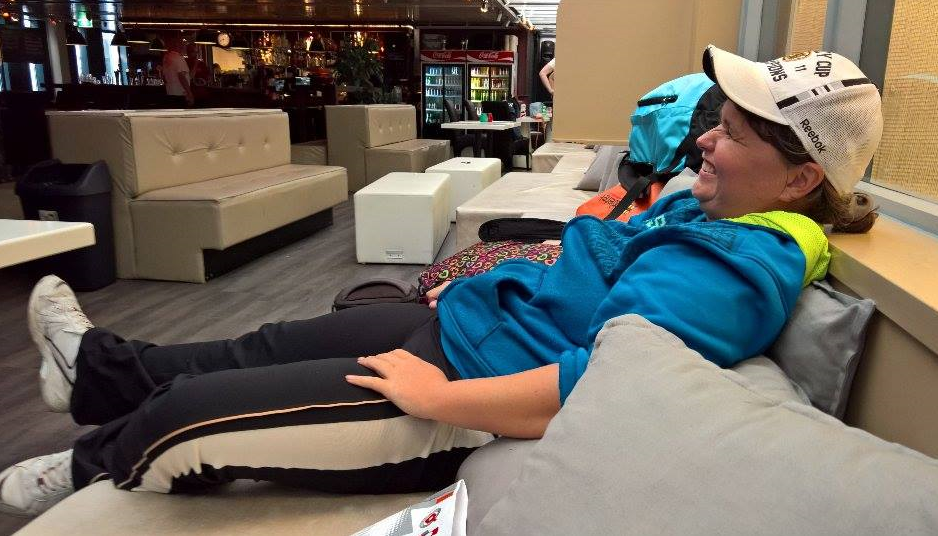 Lenka fighting through the pain at the Amsterdam International Pickleball Tournament

“Afterwards I went to a hospital back in the Czech Republic and they determined it was inflammation of the muscles and tendons. I wasn’t allowed to play for nearly a month. After waiting things out I competed in the Amsterdam International Pickleball Tournament and had the same issue return… but I won another silver medal! Miracle.”

Lenka may attribute her wins to luck and divine intervention, but we give her credit for tons of grit, determination and skill. (Though we hope her legs have gotten some much-needed rest and fully recovered!)

In addition to teaching pickleball during the school year and during summer camp for kids in Opava and Ostrava, Lenka is sharing her talent by joining with the Osatrava Municipal Hall to organize exhibitions in primary schools. 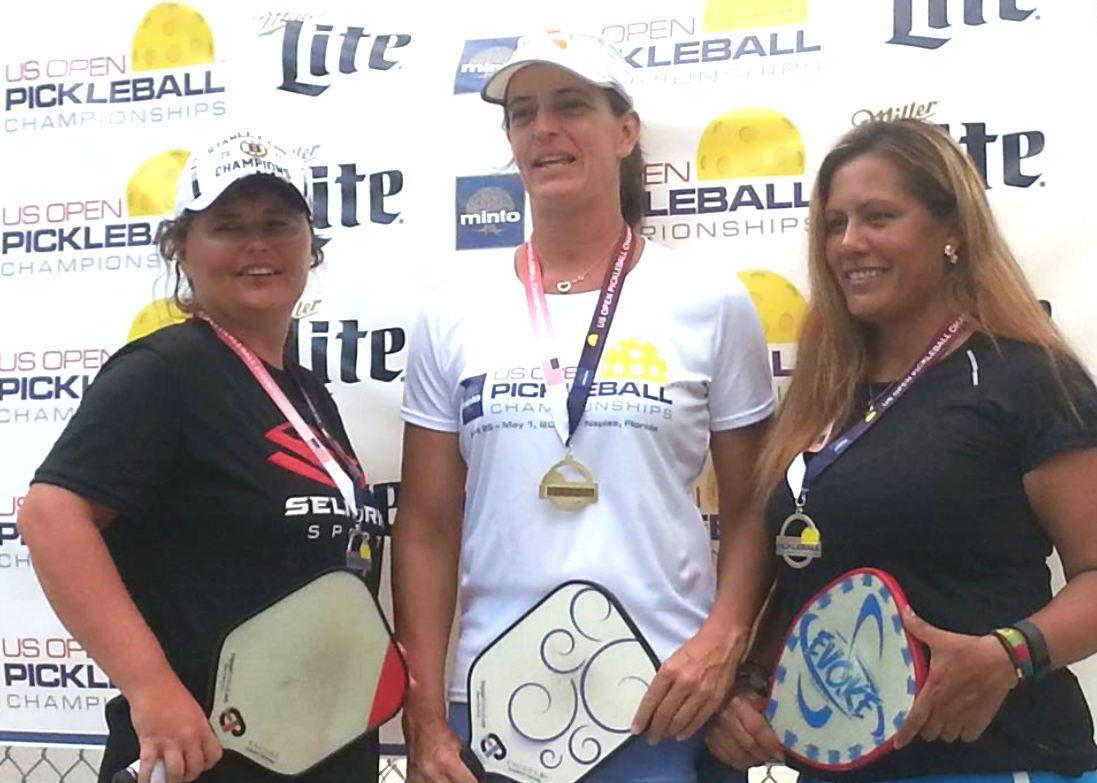 Lenka with her silver medal at the US Open

Incredibly enough, coaching pickleball and numerous other sports isn’t even this champion’s day job. Lenka primarily teaches law and economics to people transitioning in the work force. In her remaining time, she has also published 3 books on sports. (Stop making us look bad, Lenka!)

Her endless supply of resiliency is perhaps no surprise when you hear Lenka has spent her life tracking down extended family after contact was lost between relatives in the U.S. in 1948 and 1968 due to the Czech Republic’s communist regime. Thankfully she has been able to find several aunts and uncles at this point, and shows no signs of slowing down.

We’re glad this determination has spread into other areas of her life and that picklers get to benefit! 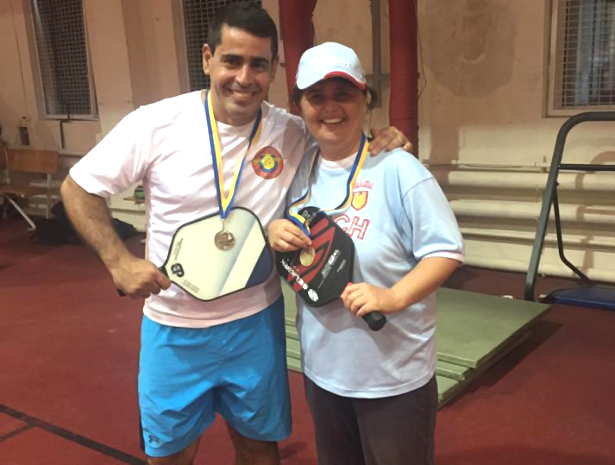 Lenka with doubles partner Leonardo Gonzalez from Spain in the Kiev International Tournament (with their gold medals!)

Europe in general has been making great progress, considering there was a pickleball tournament in Spain this past September and in the UK in October. As the number of players in the Czech Republic continues to grow, Pickleball Czech looks to the future with hope and plenty of spirit.

PickleballCentral offers a big round of applause for Lenka’s wins and both women’s dedicated efforts to continue growing the sport around the world. Thank you both for taking the time to share your work with us!