Paddletek has been keeping its newest and greatest core technology close to the chest for the past couple years, but they've finally released it to the public. With the new Bantam EX-L Pro and TS-5 Pro, players can expect to enjoy more pop, control and durability. Basically, more of the Paddletek greatness players have come to expect in a stylish new package! 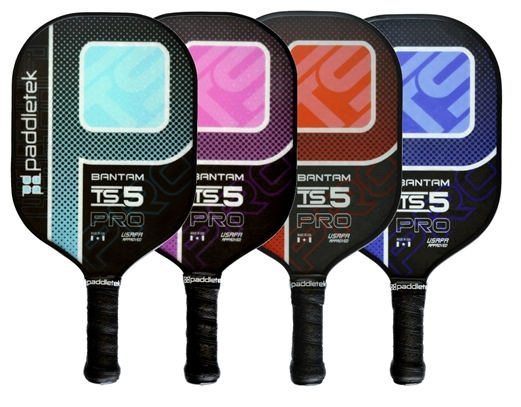 Curtis Smith at Paddletek explained to us why their Pro core took some time to become available and why it's a worthwhile improvement over previous iterations. Originally it was a matter of price and finding the right position in the market:

'The new tech in the Pro Core was actually developed a couple years ago. We tested the paddle with a few of our pros and local recreational players then. The expense of the core, however, would mean a retail price that we felt was too high for the existing market. Recently other brands have proven the viability of the retail price we needed to produce the paddle, so we added a few patent pending upgrades to the technology and retested. The results included just a few specification changes per [player] input.'

In terms of construction, the Bantam EX-L and TS-5 Pro core has a thicker design that also stiffens the handle. There is also a yet to be revealed patent-pending technology being utilized that adds extra responsiveness and quality to the entire design.

Many players are tired of hearing the old chant of 'touch and power' when it comes to a paddle's benefits, but in the case of Paddletek's Pro core, it's a fitting mention. Curtis explains:

'To describe the difference in the Pro core versus the original, we have to bring in a third aspect of play: forgiveness. The new Pro core adjusts the amount of energy required to activate the 'pop' of the paddle. Typically, you don't want pop for soft shots since it reduces control and touch. 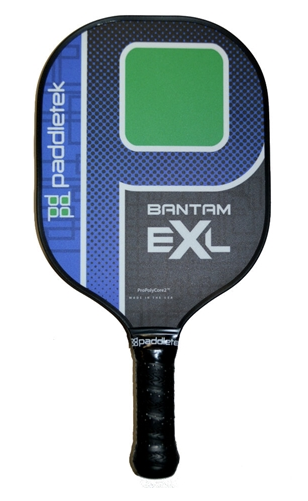 By increasing the energy required to activate the pop, the paddle’s touch or control rating increases. But when the pop is activated, it activates in a stronger, more efficient manner, providing increased power that is more accurate. Better accuracy increases the paddles forgiveness.

Now players can play with a paddle with the touch and forgiveness of the Tempest Wave, but have power that exceeds the [original] Bantam EX-L.'

A Core that Adjust to Your Needs

This intriguing concept of 'activating' the pop of a paddle makes sense to us, as we often hear about players either lamenting the soft touch of control paddles outside of dinking or accidentally sending a pickleball hurtling toward the baseline when they wanted just a light punch. With the Pro core, you can gently nudge pickleballs over the net while still having the capacity for those 'put away' shots.

Curtis finishes by saying, 'The Bantam Pro series is for players who want to add power to their game but not sacrifice control or touch, or for players already playing with powerful paddles but wish to increase that power or add more touch to their soft game. We rated the original Bantam EX-L as an intermediate to pro player paddle. But the added control and forgiveness of the new Bantam Pro series allows us to rate the paddle from beginner to pro.'

Players who have followed Paddletek for some time may also have noticed that both of these paddles also have updated graphics. Not only do the designs look stylish, but they have a textured fiberglass face with UV-coating that helps prevent damage and fading over time.

Try out the updated Bantam EX-L and TS-5 Pro today to feel the difference in play at the Paddletek section on PickleballCentral.