Scott Moore is amazing on the pickleball court. He has the love, fear and respect of pickleball players all around the world. We are honored to share some of his pickleball story. Enjoy! 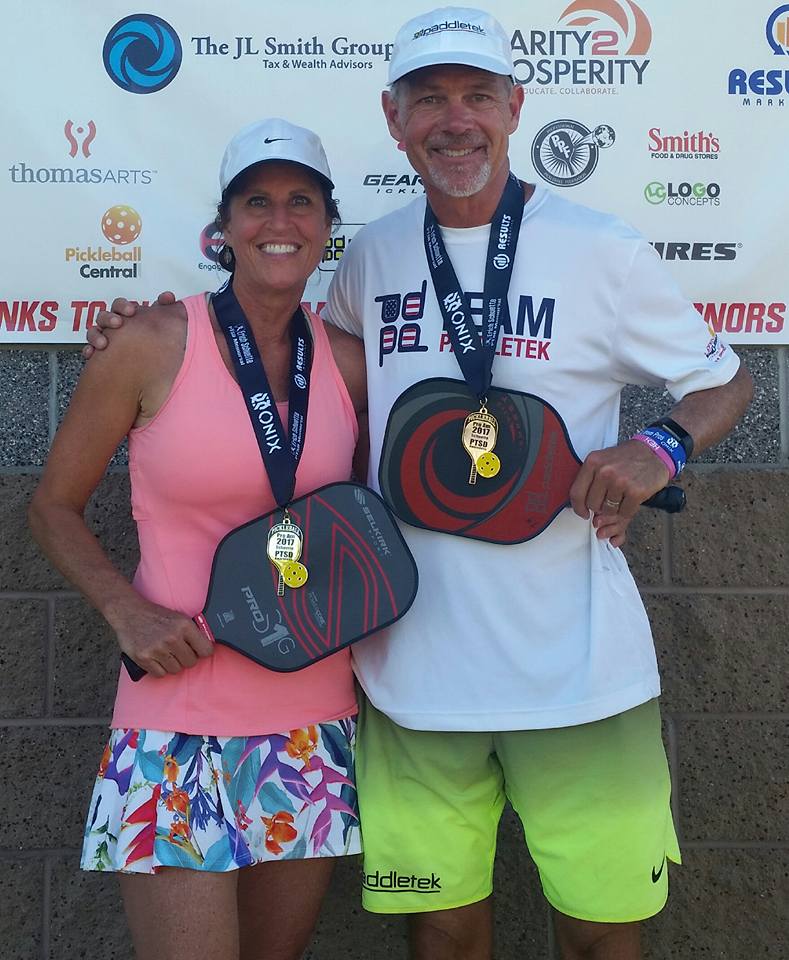 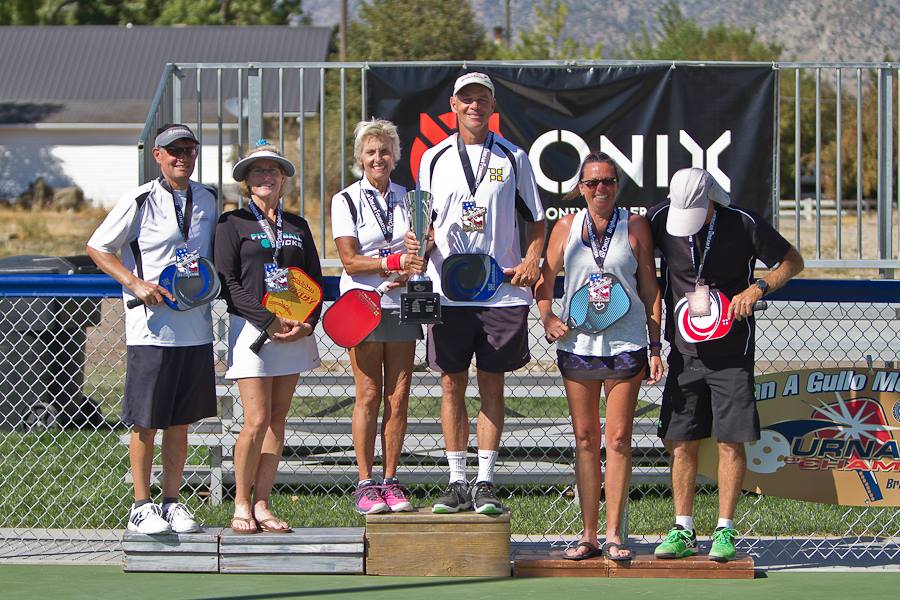 I have won 12 gold medals at the USAPA Nationals, including all 6 events last year, and 7 in a row in the Senior Open divisions. I have won 6 gold medals in a row at Tournament Of Champions, as well as Senior Open Gold in Singles and 50+ Gold in Mixed Doubles with Alex Hamner this year at the US Open. My favorites though may be winning the 5.0 Open Doubles in 2016 and the 19+ Doubles titles in 2016 and 2017 at the Grand Canyon State Games against the young guys. 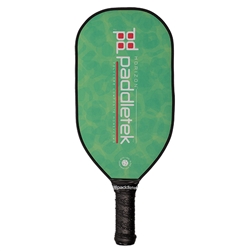 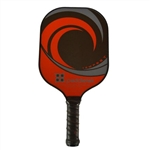 I play doubles with the Paddletek Tempest because I believe it has the most feel and control of any paddle in the game, which is invaluable in doubles. I recently changed to the elongated Paddletek Horizon for singles, as I like the extra reach and additional pop I get from that paddle.  I needed something to keep my edge, as the competition keeps getting tougher and tougher every year.

I am extremely grateful for having been introduced to pickleball by my buddy John Foss and to have been given opportunity and the health to truly enjoy it! I got into pickleball about the time our youngest son, Stephen, headed to college, leaving us as empty nesters, and I was feeling pretty down and out about it honestly. The past 4 years of making numerous pickleball friends (from my little buddy Wilsy who is now 9, to several friends that are in their eighties), and all ages in between I have truly been blessed beyond what I could have imagined!

I only play outdoors. I always say I am '1 and done' indoors. I played and won the singles in Centralia in 2015, but felt like I had to work twice as hard to get a point, and am getting too old to work that hard. 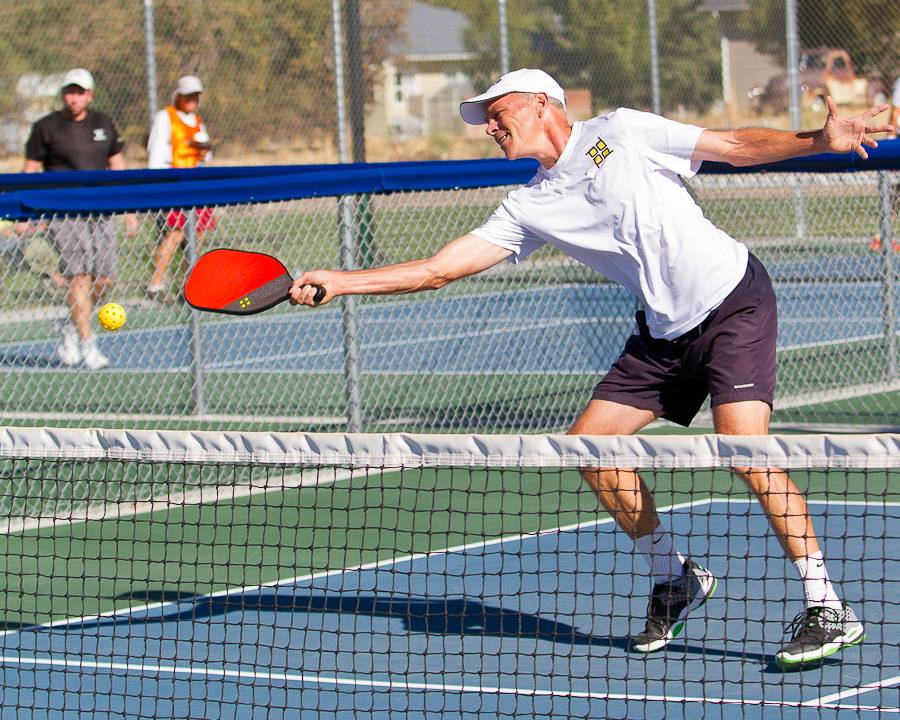 Until last year I would have said that I liked singles better, as that came very intuitively to me. I love the physicality and speed of the singles game.  But over the past year or so I have grown to love doubles as well, as it is so incredibly strategic. I enjoy more than ever having a partner out there to share the court. So now I probably would say that I probably prefer doubles, especially since it has also been a means of making lots of new friends and I don't feel as much pressure.

My favorite place to play is a difficult question, as I have discovered some amazing places to play over the past few years, including the only dedicated court in all of Australia, outside of Brisbane, an improvised court in the south of Portugal, a couple of beauties in Big Sky, but my sentimental favorite would be Palm Creek, where they have 32 dedicated courts and I have won every match I have played over the past 9 national events there (haven't counted but would guess that is about 45 matches in a row).

Scott Moore at Tournament of Champions

My secret sauce is probably that I thrive on competition and tend to play better under pressure. My tip for players would be to play your heart out, never give up, fully engage mentally, and remember it is only a game and at the end of the day it is all about the relationships, not the wins and losses.

My day job is being somewhat of a serial entrepreneur. I have a couple of businesses in or related to Japan, where we lived for 16 years, including an import company in Tokyo and a consulting business. We also have a decorative concrete business in Colorado Springs, which is perfect as we shut down for the winter every year, so I can travel and do more pickleball related stuff in warmer places during the winter. Lastly, we have a pickleball family business, you can find info about at pickleballtrips.com where Daniel and I conduct intensive camps, and clinics as well as take people around the world on pickleball adventures.

I struggle at times finding enough time to play, and probably do more off court than on court training. On average, I play 6 to 8 hours per week.  I have a couple of guys in Colorado that I train with so I try to schedule the time with them early in the week in order to make sure it happens.

I am not big on luck so no rituals other than making sure I really hydrate, eat, and sleep well before big tournaments.

Last year my biggest goal was to win 5 gold medals at the USAPA Nationals. Thanks to some amazing partners I was able to win 6 which was really just a dream.   For 2017 my primary goal would have to be to try to repeat and win 6 at the USAPA Nationals again, as now I realize it is possible.   My other goal would be to beat Simone Jardim in the Battle of the Sexes match that we are playing at Bobby Riggs on October 7th.

She is truly a fabulous athlete and player, but I plan to rise to the occasion and win one for the old guys. We will have some special entertainment at the event and we will have a doubles battle as well. One more goal will be to make this Battle of the Sexes event the best event of the decade (see pickleballtrips.com for how to watch it live).

Becoming one of the best players in the world, and everything that goes with it has been more fun than I ever thought it could be! 'Pickleball has enhanced my life in more ways than I ever could have imagined.  The fact that I got to watch my son Daniel become the best player in the world, and now get to work with him some is truly indescribable. I am blessed beyond what I deserve and often feel like I am living a dream!' 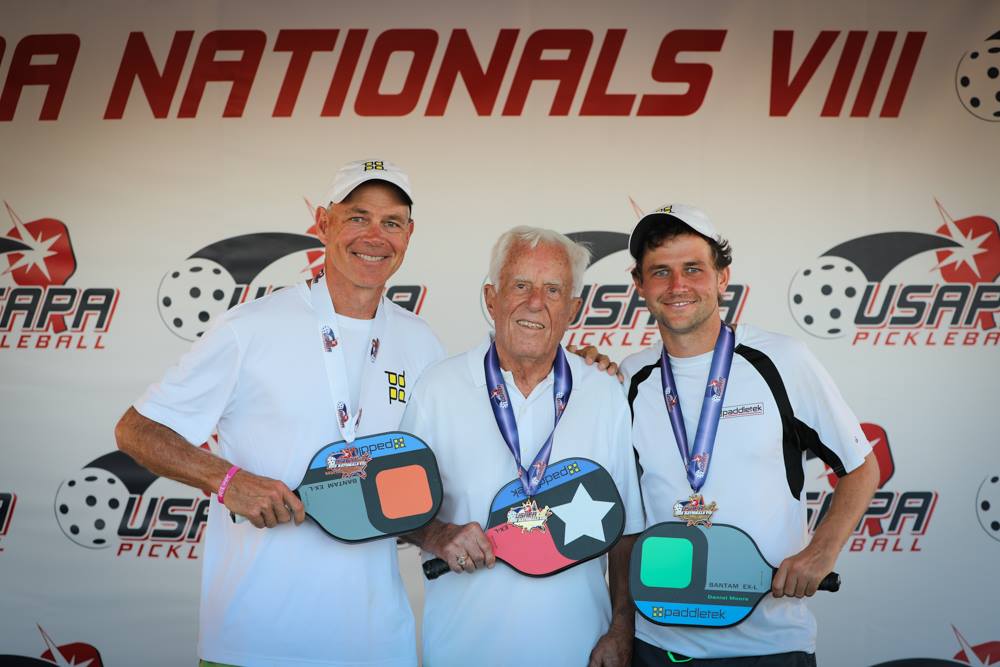 The Moore's have the Midas touch! Three generations of gold at the 2016 #USAPA Nationals. Left to right, Scott Moore, Carl Brumley, and Daniel Moore.