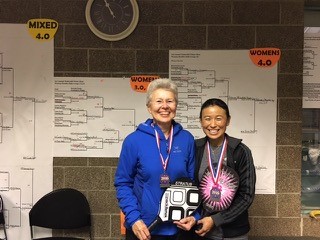 Nancy Jensen is one of our favorite local Pros. I love Nancy's story, especially the part about Joel Pritchard coming to her school and Nancy's use of pickle juice to re-energize during a tournament. Enjoy!

Can you list for us your wins so that we can correctly introduce you to our readers?

In May of 2016 I began competing regularly in tournaments. In June of 2017 I received notification that I would be rated as 5.0. Takako Tourangeau & I decided to delay that change until after Nationals in Nov. since the 4.5 category would now be included. For 2018 I have played in my 5.0 Legacy rating, but my rating under the new system will now be WD - 4.5, MXD 5.0, WS- 4.5.

I have been lucky enough to play in quite a few tournaments with different partners since I started playing competitively two years ago. My tournament experiences below lists many of the medals I’ve won in the skill categories 4.5 and 5.0. I’ve also competed in the age groupings of 35+ through 70+. My hope is that I can continue to be considered a competitive tournament player who can play and find partners in these skill and age groupings at future local or national tournaments. 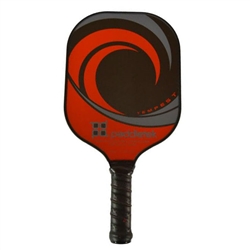 I have played with various paddles produced by Paddletek. I thought I was playing well with the Bantam until this year at the Grand Canyon Tournament when Chris Miller had me try his red & white Paddletek Tempest. He thought with my game, I’d like the touch & feel of this paddle and he was absolutely right. I’ve been tempted by other paddles but prefer playing with the Tempest. Like in tennis, I need to stay with a paddle that fits my game and not be tempted by the latest & greatest new paddle.

I began teaching High School PE in 1972 and during a fall sports clinic, Joel Pritchard presented a brief workshop on pickleball. He handed out a 2-page rule sheet which included a template for making paddles from 5/8 inch plywood. My fellow PE teacher purchased the wood & cut out the paddles. We sanded them down, placed athletic tape around the handles as grips and then purchased wiffle balls. At the end of our badminton units we would incorporate a pickleball unit. At that time I was teaching, coaching and playing competitive tennis, so I didn’t like pickleball. The paddles were too heavy and the handles cut your hands. In 2014 I found pickleball listed at a Seattle Rec. Center and saw for the first time how much the sport and equipment had changed since the 70’s. Injuries had prevented me from continuing with tennis, so I was eager to finally find something I truly enjoyed as much as tennis.

What is your preference: playing indoors or outdoors?

I love playing outside when the courts are dry, temperatures are above 50 degrees, the wind is below 10 mph and the Dura-40 ball is being used. But because I choose to live in the PNW and I want to play, drill & improve my game, I have to play inside on hardwood or a tennis court. During the rainy season, I’m just happy that there are now indoor pickleball courts available. For tournaments, I prefer outdoor play with all it’s varied locations and the diverse natural elements which add additional challenges to this extremely enjoyable game.

I’ve always enjoyed playing a singles game characterized by more net play and fewer groundstrokes. Right now I feel I can still be competitive at the 4.5 skill level in the 35+ and 50+ divisions. At my age singles takes a toll on my body very quickly and I don’t want it to negatively affect my doubles play in the days which follow this event. My hope is that the smaller tournaments will begin using a 15-point format with 2 out of 3 games reserved for the finals. This change, I think, would encourage more women to begin or continue playing in the singles event.

I love the doubles game mostly because I can more fully utilize my aggressive serve & volley skills developed when I played tennis. They transfer almost seamlessly to pickleball shots and strategies. Of course, the dink shot has proven to be a challenging exception. I believe a successful doubles team requires finding a partner whose game both complements and contrasts with your own. Finding a partner, and then working together to develop the skills, team strategies, competitive temperament, and thereby the team chemistry needed to compete successfully, is one of the hidden rewards to be treasured in the doubles game. 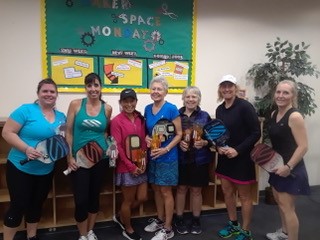 I began playing at various rec sites in Seattle, Mercer Island and the ARC located in the International District. Each time I changed location it was to move to a higher level of play where I thought I could now compete and also learn more advanced skills. Since I prefer to play against a variety of players, my favorite locations in Seattle are now: Pickleball Station, Yost Park, SeaTac Rec. the Highline Athletic Cemter in Burien and also the Eastmont Public Parks in East Wenatchee.

Be sure you’re having fun and that you are continually striving to learn. Find a player who is as addicted to the game as you are and is willing to drill. I was fortunate that when I started to play competitive pickleball I meet and partnered with Takako who was developing a similar addiction to the game. We continue to drill & play to help each other improve our individual skills and games strategies.

For 31 years I taught in the Highline School District. I began teaching PE & coaching tennis at Highline High School in 1972. For 4 years I directed the WA State Girl’s Invitational Tennis Tournament until the event was recognized by the WIAA and became an official State Tournament. In 1980 I joined the Business Dept. at Highline teaching computer programming, Info Tech & Computer Apps, and Web Design. In the 1990’s I moved to Mt. Rainier High School’s Business Dept. and taught there until I retired in 2004. After 31 years of teaching, I retired. In Seattle it’s an extreme joy not to have a daily 30-45 minute commute.

During the summer I usually play between 3 to 4 days a week for about 2-3 hours. One or two of those days are focused on drills. During the rainy season, it has become more difficult to find facilities that aren’t overly crowded. However, I can still play 2 times a week but I also try to find times, facilities & players who are available to drill in the mornings or midday.

I don’t have any rituals that I know are lucky. To prepare my body and mind, I do focus on hydrating with electrolyte drinks several days before the tournament. I also keep a supply of pickle juice handy in case a more concentrated supply is needed during the tournament. I continue to follow the preparation activities I used for tennis. This includes mentally practicing my shots & strategies, reviewing mental & physical notes I have about my opponents, try to determine what the best individual/team strategy might be against some opponents, and deciding how the court and playing conditions will determine which option I’ll prefer if I win the toss. My most important ritual is: “Always go to the bathroom before taking the court, so you’re sure to have your complete attention on the game!'

Skills I’m currently trying to develop are: blocking and digging out smashes from the mid-court with a soft drop shot into the kitchen. Footwork remains a constant area of work and focus because it has such a major positive impact on my consistency and success when I move efficiently and get into position early. I just received an incredibly appropriate t-shirt for my birthday. It states:

I am told that I’m a bit too aggressive in my play and need to develop “patience.” “Easy” as Brian Ashworth has frequently said, should be my mantra.  Unfortunately after about 3-4 dinks a little voice shouts in my ear, ”Attack.” Now my goal is to regularly hit 5-6 dinks in a row and maybe someday get to 10 dinks before I hear “Attack!”

First, I am not one of the best players, but I think being in Seattle has allowed me to watch and play against some of the best. Many of these players have been very willing to give me tips and help me develop my game. Realizing that I don’t have that many competitive years left, I knew I needed a more concentrated and focused approach to improve my game. I decided to take a few lessons, something I never did for tennis. The private lessons from Peter Hudachko has been a immense help in improving my skills in both dinking and blocking, while also making my footwork patterns more efficient.

Youtube videos have allowed me watch the skills and analyze the strategies used by the BEST. Although my previous experience in tennis is a help, I was slow to realize that pickleball really isn’t tennis. I need to continually analyze, modify and/or develop my shots and strategies. Recently I viewed a video of my competitive match play. Although not a pretty thing to watch, it clearly shows you what you have not corrected, the errors or poor techniques you’re continuing to use, and the poor footwork or court positioning that has returned and must again be corrected. I think most players would improve their skills & court positioning if they could arrange to have a video made of their match play. This visual feedback provides you with the critical information you need to realize your progress and also determine your new goals in pickleball.