Meet David Redding, another humble convert from tennis who is addicted to the game of pickleball and doesn't mind telling you that he feels blessed to be a member of the pickleball community. Enjoy!

I play with a Paddletek Bantam EX-L, Texas edition. When I first began playing a couple of years ago, I bought about 7 or 8 different paddles, whatever I saw the big boys and girls playing with. When I got to the Bantam EX-L, I knew I had found the best paddle out there, a great combo of pop and touch. Paddletek has been very good to me and for me.

What's your pickleball story? How were you introduced to pickleball?

I first "dated" pickleball in the Spring of 2013, while visiting my parents in Hot Springs Village, Arkansas. I had been asked several weeks earlier by a member of the Northwood Club in Dallas, where I serve as the Tennis Director, if I had ever heard of pickleball. My answer was "what ball?" So, I'm visiting Hot Springs Village a few weeks later when I was told a group was playing in a church family life center. So I decided to go have a short look. About 4 hours later, I left the court soaked in sweat and totally infatuated. When I returned to Hot Springs Village over the week of July 4th the same year, I was ready to begin a long term relationship. I played every day, sometimes twice a day for a week. My tennis racquet and golf clubs sat untouched in the trunk of my car. When I returned to Dallas, I was introduced to a pickleball group within 48 hours, and since then I have not picked up a golf club, a basketball, a baseball, a bowling ball, a deck of cards or a javelin. Come to think of it, I have never picked up a javelin, even before pickleball. (: I still pick up my tennis racquet because that's how I make my living and pay for my pickleball addiction.

Indoor or outdoor, it makes no difference. I will play anywhere you can set up a net. I find it a delicacy when I can play on a permanent pickleball court, as they are very rare in Texas. I love the outdoors, but I do feel that I play better indoors, because that's where most of my practice has been and I find I have more touch and control with the indoor balls.

I have always enjoyed playing singles in pickleball because of the exercise and because it is more like playing tennis than doubles play. The nuances of doubles is growing on me though. I have come to the realization that doubles is much more like a chess match than a tennis match and have developed a new and greater appreciation for playing it. Still much to learn!

What's your favorite place to play? Why?

Being fairly new to pickleball, I have not yet had the pleasure of playing many venues across the country, but I am working on it. My favorite indoor place to play is the family life center at the Village church of Christ in Hot Springs Village Arkansas. It is the venue where I was introduced to the game, and I love the people there. They use pickleball as an outreach to the community. I look forward to playing there anytime I am in the area. I would put the courts at Little Valley in St. George, Utah as my favorite outdoor venue, having both great courts and aesthetically pleasing views.

What's your "secret sauce"? Any tips for players?

I've never thought of myself as having a "secret sauce", but I would say that I have developed pretty good touch and feel. I would say to others to work on having "Palmolive hands"; in other words, you need to soften your hands when you are trying to hit drop shots or drop volleys or trying to take pace off a hard hit ball. Softening your hands is not the same thing as loosening your wrist. They are completely different things. A great drill for working on this is to throw or hit a ball a few feet up in the air and then try to catch it on your paddle face without it bouncing. As you get better at it, you can hit it higher and higher while trying to catch it on the paddle on its way down. This is more difficult than it sounds, but it will definitely help with your "Palmolive hands" and paddle control.

I have been the Director of Tennis at Northwood Club in Dallas, Texas for the past 27 years. I have just taken a new job, however, and will begin in January as the Head Men's and Women's Tennis Coach at Harding University in Searcy, Arkansas. Harding is a Division 2 school and is my Alma Mater. Needless to say, my wife and I are thrilled to be going back after 32 brief years away and we are bringing pickleball with us.

Unfortunately, I do not get to play a great deal of competitive pickleball and only a small amount of social pickleball. On a good week, I may play socially for a few of hours and may get a couple of competitive games in a couple times a month. I envy the retired crowd.

I have a feeling that my personal pickleball play will be placed on the back burner for a short time while I establish myself as a formidable college tennis coach. One of my short term goals, though, will be to popularize the game on the Harding campus and throughout the city of Searcy, Arkansas. A long term goal is to invite some of my new pickleball friends and competitors to Arkansas to play with Kay and me and get to know them better. In turn, I hope to be invited to other areas of the country to play with new and old friends as well.

Anything else you'd like to share about your experience being one of the best pickleball players in the world?

I don't consider myself as one of the best players in the world, but I do consider myself one of the most blessed players. There's a lot I could say here, especially about the number of great friends I've met and the number of wonderful new places I've been as a result of playing the game. But two specific things come to mind, and they both relate to family. First, I have been fortunate to have parents who have always been involved in my sporting life and who love to watch me compete. My 76 year old father has used my new passion for pickleball to reignite his amateur coaching skills and has enthusiastically traveled far and wide to follow me and give me sage advice at most of the major tournaments. Pops has a bigger following than I do, and I love having him in my corner. 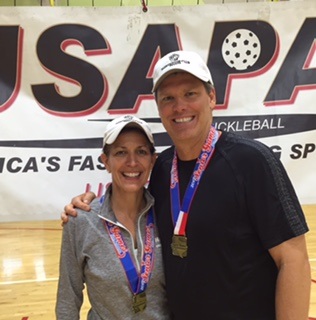 Second, if I never win another tourney in my lifetime, I will still die a happy man. OK, that is probably a bit of an exaggeration, but it sounds good. Earlier this year my wife Kay and I competed in the National Sr. Games in Minneapolis.

I had visions of gold in men's singles and doubles, but had very little expectation of success in mixed doubles, since my wife Kay had never competed in any sport growing up and had only played pickleball less than a year. The morning before the mixed doubles began, I laid out a strategy that basically was "resist any temptation to hit the ball hard, try to keep everything in the kitchen, and when the ball is hit hard at you just block it back." Well, she executed that strategy like a boss and then some. One bye and five tough matches later we emerged as gold medalists. I told her she began the tournament as a 3.0 player and came out as a national champion. 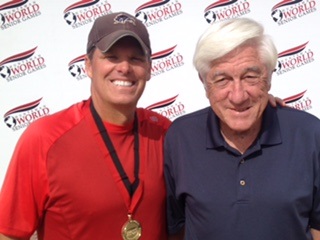 David and his Dad

What a thrill for us! To make the win even sweeter, it was witnessed by Pops, who had driven to Minneapolis by himself from Arkansas, our two married daughters who had never seen us play, one son-in-law, and our 1-year-old granddaughter. It was a magical time. But then again, most of my pickleball experiences have been stinking awesome! That was just the pinnacle! 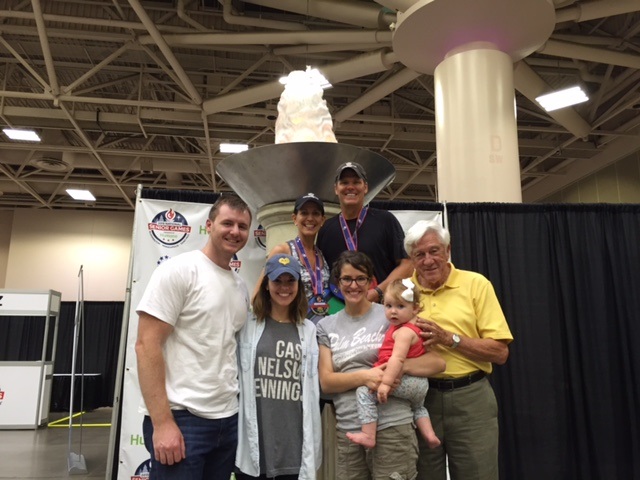