Over the past several years paddles with thick cores have risen in popularity and versatility. With major manufacturers such as Selkirk, Paddletek, Prince, Onix and GAMMA all offering thick core options, there's a reason players have turned to this style of paddle and found it improved their game.

Many of those reasons are explained on our Thick Core Paddle guide where you can hear from a number of paddle manufacturers regarding why they've ventured into the world of thick core paddles and how their construction has changed over time. This is definitely a style that's here to stay and players of all levels should give them a test if they're looking for something highly controlled and stable under pressure.

One of the first thick core paddles to hit the market was the Selkirk Amped Omni, which was created in conjunction with pro player Glen Peterson. We recently had the opportunity to speak with Glen about his initial thought process behind the design and what he believes this style's greatest strengths are. If you're interested in learning more about the benefits of thick core paddles, Glen explains them clearly:

'The idea of a thicker core appealed to my desire for a more stable paddle that generates more consistent shots across the surface. I hoped that a thicker paddle would be less likely to twist in my hand when the ball struck near the edge. Theoretically this made sense to me as a thicker core could have a lower modulus of elasticity. Practically, it just seemed the right direction the same way larger frame structures in other racquet sports improve performance.

'I cut a paddle out of a piece of 2 inch foam just to see what the thicker template felt like in my hands, and it felt great even though I couldn't hit a ball. I then took two half inch cores and glued them together to create a usable paddle but with no edge guard. This 1 inch thick paddle was a breakthrough for me. Brian Ashworth hit with it and agreed. The challenge was creating a thicker paddle without dramatically increasing weight. Selkirk took on this challenge and made the Omni paddle with 5/8 inch thick core.  While an 1/8' thick seems small, it is a 25% increase in thickness.

'The key advantage is more consistent ball performance coming off a larger portion of the paddle surface. While it might seem a thicker core would generate more power or ball speed, the opposite seems true. I get more control, touch and consistency even when I miss-hit the ball. And I get all the power I need. Players like Ty McGuffin are able to generate amazing power even with the thicker core. Players who want tons of power with shorter strokes might prefer thinner paddles with smaller but dramatic sweet spots.

'Perhaps the only unexpected drawback to this type of paddle is that it's harder to pick up a ball lying on the ground with the edge of the paddle since it's thicker!

'I see paddles becoming even thicker with innovative core materials and improved paddle science. Additionally, I see ball development as being an important factor in paddle improvements. If balls become softer and less brittle, the paddles will change accordingly. Current top paddles are optimized for the Dura Fast 40 Ball which is preferred by most top players.' 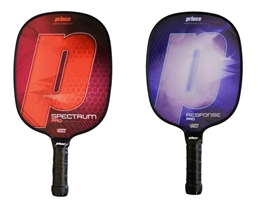 Glen's predictions have proven true so far, with manufacturer Prince introducing two new paddles featuring 9/16' thick cores in 2018. The Prince Spectrum Pro and Response Pro have both proven popular and feature a unique oval-shaped design. The thick core makes these paddles very rigid and transfers energy evenly along the sides, top and bottom of the design. This effectively expands the sweet spot and lets players make use of space that would be 'dead' in other paddles nearer to the edge guard.

Onix released their .625' thick paddle, the Outbreak, in 2018 as well. It uses a carbon fiber face to create a soft feel that reduces vibration from impact, increasing stability and letting players maintain control over their shots. Paddletek's Pro Series with 9/16' cores was released later that year and included the Tempest Pro, which uses a graphite face. This combo is thought to create one of the best feeling paddles available, allowing players to hit against any area of their paddle's surface without experiencing decreased responsiveness.

GAMMA was another major manufacturer which saw the strengths of thick cores and expanded the market in 2019. The Compass, Shard and Legend added more shape and weight variety to the mix and have shown the sweet spot can be broadened with this technology no matter the paddle's shape or weight. With many top players enjoying these options and variety, there's something that will satisfy everyone looking to try thick core paddles.

One of the only potential downsides players may want to be aware of when looking at these paddles is the fact that their handles tend to be more square-shaped and boxy due to the thicker construction. While several of the paddles mentioned above do come in small grip circumferences (4-1/8'), they generally have more of a structured feel to them.

Many players have found that they're able to easily adapt to this shape after a few games with a thick core paddle, but this is something to be aware of when considering the various choices. Another option is to add an overgrip to these paddles for the purpose of softening up the more defined edges of the handle. 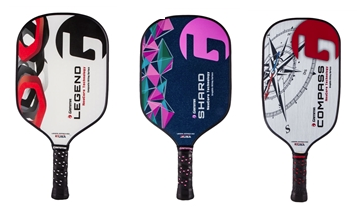 There are currently nineteen different paddles from six manufacturers collected on our Thick Core Paddles page, and with the way development is going, we expect this number will continue to grow. Learn more about all of these paddles here.