Most beginning picklers prefer taking balls after the bounce rather than volleying (hitting the ball in the air before it bounces). They back up rather than advancing to take balls in the air. Great pickleball players love to volley and are adept at moving forward to hit winners. So get your toes to the line and own that kitchen!

Pickleball at the highest level is always won and lost at the kitchen line. No pros have succeeded with a baseline strategy. 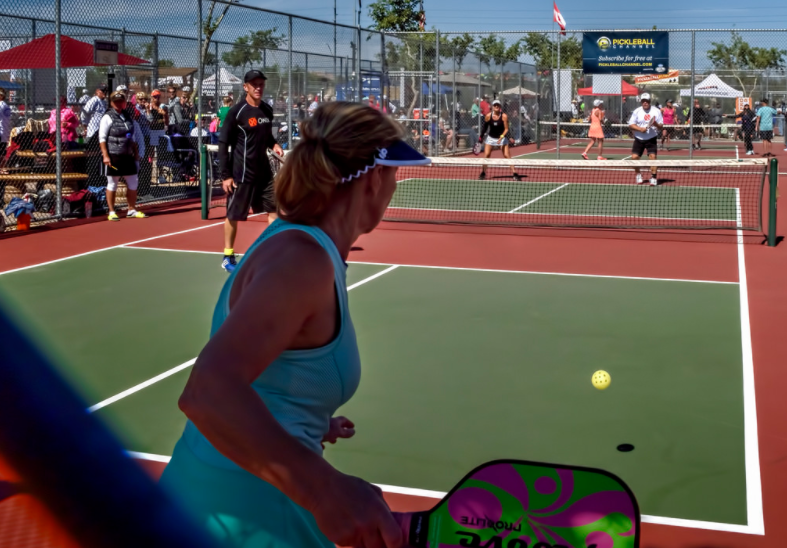 Unless you're staying back for the serve, get to the kitchen line! (Credit: Michael D. Martin)

Do you prefer to wait for a bounce rather than smacking balls in the air? First, this requires a lot more energy. Second, it exposes your feet to your opponents. Third, taking a ball after it bounces gives your opponents much more time to react. Fourth, striking a ball before it bounces allows more offensive shots that may surprise your opponents.

For many of us, volleying is not as instinctive or safe as ground strokes. The wrist action involved, especially for low balls, can be awkward and inconsistent. Try punching the ball with a firm wrist. Bend your knees if possible so your line of sight is closer to the ball and net level.

Either punch the ball back deep to force your opponents to stay back, or block the ball with almost no forward motion to drop the ball just over the net. This latter shot can be extremely effective, especially with us less mobile players! Drill with a partner and just focus on punching balls back.

Another volley method is using topspin as in table tennis. Keep your body square to the net and the paddle perpendicular to the ground while using a sweeping forehand or backhand motion from your elbow upward. Keep the stroke compact. How much wrist you use depends on your comfort level, but start with a firm wrist.

Tennis has evolved away from a serve and volley game to a baseline game. With some notable exception, many tennis players prefer hitting pickle balls after they bounce rather than volleying. Ping pong players never volley. In the highest level of pickleball, most winning shots are volleys, not ground strokes.

Hitting volleys requires that you get to the kitchen line and own it! Don't back away unless lobbed. Love taking balls before they bounce. Learn to wine and dine at the kitchen line!