The 2nd annual Texas Open was held September 12-15, where stalwart players braved the heat to test their skills at the Open Wagon Wheel Tennis Center in Coppell. Of the 747 participants that took part, 28 were juniors ranging from 7-18 years old.

These young players are a growing demographic which has only recently gained legislation needed within USAPA-recognized events to fully take part. While many picklers have expressed enthusiasm for the newer generation getting involved in the sport, the reality is that the journey toward full integration hasn't been as cut and dry as grabbing a paddle and showing up. 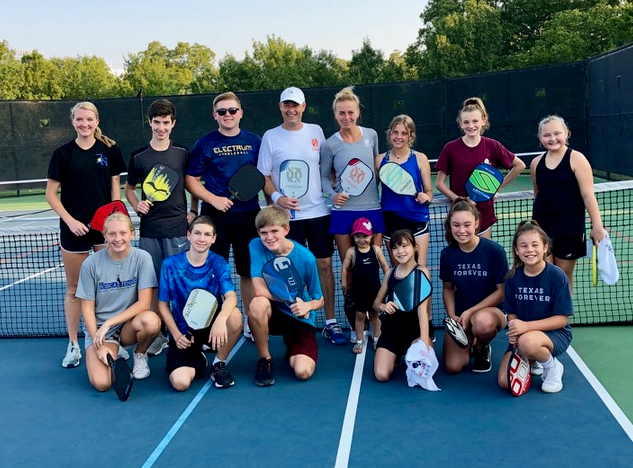 We recently spoke with Ashley Stone, mother to the winner of the Lone Star Award (Wyatt Stone). She was willing to illuminate some of the challenges the juniors have faced and overcome in addition to describing their experience at the Open:

'My son Wyatt has played in 12 tournaments and taken 18 medals since January 2019. When he first started playing, we had to ask tournament directors to lower the minimum age to allow him to play. He even pre-qualified for the American State Games, but they wouldn’t let him join due to their minimum age restriction last January.

'I have been adding junior events to the USAPA Junior Facebook page and website for a few months. In a short period of time (Jan-Sept, 9 months) we have seen the minimum age lower to include junior players in about 90% of all tournaments nationwide, excluding the senior tournaments. Pickleballtournaments.com just added a “junior” search feature to their toolbar this month as well. This is a huge milestone for the junior movement! 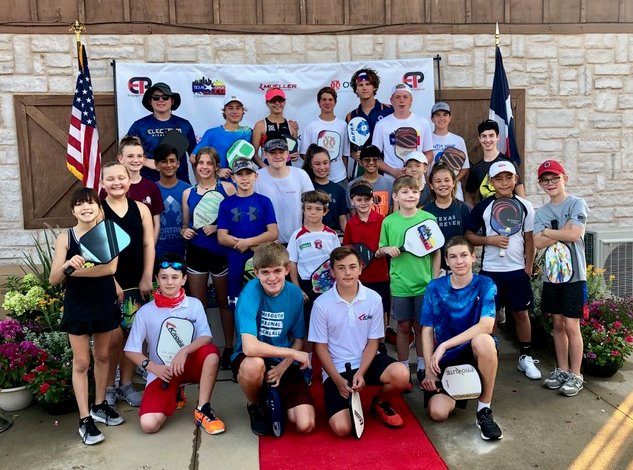 'In the first few tournaments, Wyatt would often be one of two or three juniors playing in the 19+ skill events. With each tournament we have seen more kids at each event. The Mansfield Summer Slam which was on September 7th had 6 junior players playing up in age 19+ by skill. The Texas Open is the only tournament in the mid-south to have enough kids to make junior brackets work.

'At the Texas Open, events were grouped by players 7-13 and 14-18 years old, a handful of which also played in 19+ age/skill events. The kids came from Texas and Oklahoma areas. Skill ranged from novice play to a 4.0 skill level. All of the kids have a family member who introduced them to the sport and are very passionate about it. They had a really good time and thought it was cool the mixed open events were happening on the same day as the junior events. The kids' games were right next to pro players.

'One thing that was really great was the pro players (Joey Farrias, Lucy Kovalova & Matt Wright, Michella & Daniel DeLaRosa, to note a few) would stop to watch the kids and do a quick meet and greet. Some of the pro players even refereed junior games. Two I can think of were Gigi LeMasters and Anna Leigh Waters.

'There were also 2 junior pro players, Anna Leigh Waters & William Sobek, who competed at the pro open level.  All the juniors lined up to watch at least one of their games.'

Ashley mentioned something many junior players would like to see moving forward is divisions separated by skill rather than age.

'The Texas Open (and all other USAPA-sanctioned tournaments) divide juniors by age. We have not yet attended a junior tournament in the US that has enough kids to divide by age and then further divide by skill. What I have seen is that ability doesn’t discriminate by age. In an event with kids ages 7-13 or 13-18 in the Texas Open, we had novices competing with advanced players. All the kids and their families unanimously agreed they would have healthier competition if they played in events by skill.'

It's also exciting to note that a junior was chosen as the recipient of the Lone Star Award at the Texas Open, a recognition given to someone who has used pickleball to help build up their community and improve people's health. The winner this year was Wyatt Stone, Ashley's son.

'Wyatt completed the IPTPA level II certification in less than a month with the desire to teach as many kids pickleball as he could reach. He went to Oklahoma twice to volunteer with youth camps, ran the Andy Roddick Pickleball Camp in Austin, hosted monthly kids' camps over the summer and set up (with the parks department) a free weekly pickleball clinic for kids that he will teach.

'The September classes have been booked up since last month. Wyatt volunteers working with his mentor May Laz at clinics, camps, challenges and tournaments on a weekly basis. He is also the USAPA Junior Pickleball Facebook editor and has more than organically tripled the followers since he took it over. He runs the Pickleball Facebook Junior forum and San Antonio IH35 to Austin Pickleball meetup where he organizes free competitive play.

'Wyatt is 14-years-old and had only been playing a a couple of weeks when he asked to go to the Texas Open as a spectator. After spending the weekend at the Texas Open, Wyatt wanted to learn how to play like the pros. Wyatt played in his first tournament in January, the Oklahoma State Games, and took 3 gold medals.

'He has been competing ever since, playing in 9 tournaments with 16 medals. He took a gold medal at the MT Regionals, earning a spot at Nationals which he will attend in November. He became IPTPA certified in June and added teaching to his rigorous training schedule. 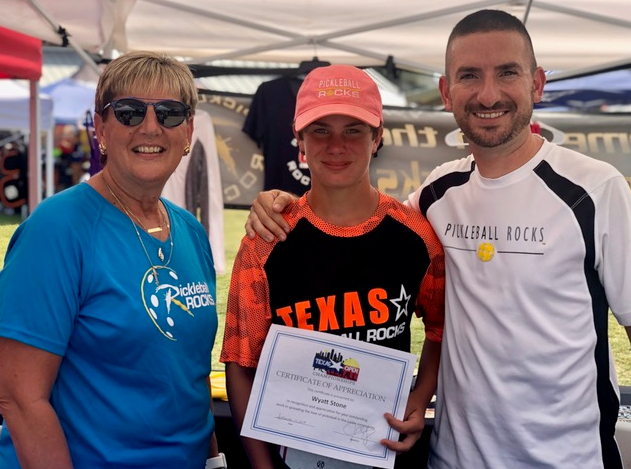 'Wyatt did not have racket or paddle experience prior to playing pickleball and has come up through the ranks by working hard and earning his place training with local 5.0 players. He publishes a blog on his website with articles relevant to junior players and their families: WyattStonePickleballJunior.com

'Wyatt joined the Pickleball Rocks Team this past summer and accepted the nomination to lead the USAPA junior program as the USAPA National Junior Coordinator.

'He is thankful every day that he steps on the court and loves to see other kids getting involved in recreational and competitive pickleball.'