The Quad Cities Pickleball Club (QCPC) has recently launched a youth program and a youth clinic in the Quad Cities.  Here is their story, provided by QCPC member Ruth Senneff. Enjoy!

The cities of Bettendorf and Davenport are Mississippi River towns on the Iowa side of the river, and the cities of Rock Island, Moline and East Moline are on the Illinois side. These are the major cities in the Quad Cities, and there are about 20+ other communities in the local area. The Quad Cities Pickleball Club draws most of its members from 4 counties and 25 different towns/cities. The club has close to 450 members, and we think 2-3 times more people play the game locally. Pickleball is a hit in the Quad Cities!

How Pickleball Got Started in the Quad Cities

In 2007, a couple of friends from the area spent some time in The Villages over the winter months. Back in town, they would talk about this fun game of pickleball being played down there and wished they could get it going in the Quad Cities. When some players approached both Bettendorf and Davenport Park Boards about the sport, Davenport stepped up to the plate first and marked 3 courts at Northwest Park. Since NW Park is adjacent to the Duck Creek Bike Trail, people would stop their bikes and ask about the game. In June of 2008, a clinic was held at the courts to teach this new sport and to gauge interest from the QC community. A local newspaper, the Quad City Times, covered the clinic and printed an article about it.

The local pickleball craze was on its way. Lines were soon put down on a tennis court in nearby Bettendorf. Dean Easterlund was the first area USAPA Ambassador. The Quad Cities Pickleball Club was organized in 2013 as a nonprofit with a board of directors and about 80 members. Dean served as president of the club the first two years, established our website, and worked with city leaders in getting our first six dedicated courts in Bettendorf in the fall of 2013. Just a few miles to the north, the City of Eldridge, Iowa, put in six lighted dedicated courts the following year, followed by six more on the Illinois side at Mel McKay Park in Rock Island. In 2015, the City of Davenport put in 8 dedicated courts on the original spot where play began.

Bettendorf School District and the City built six dedicated courts on the Middle School campus in 2016, and we celebrated those new courts with school administration, city staff and some youth in June. 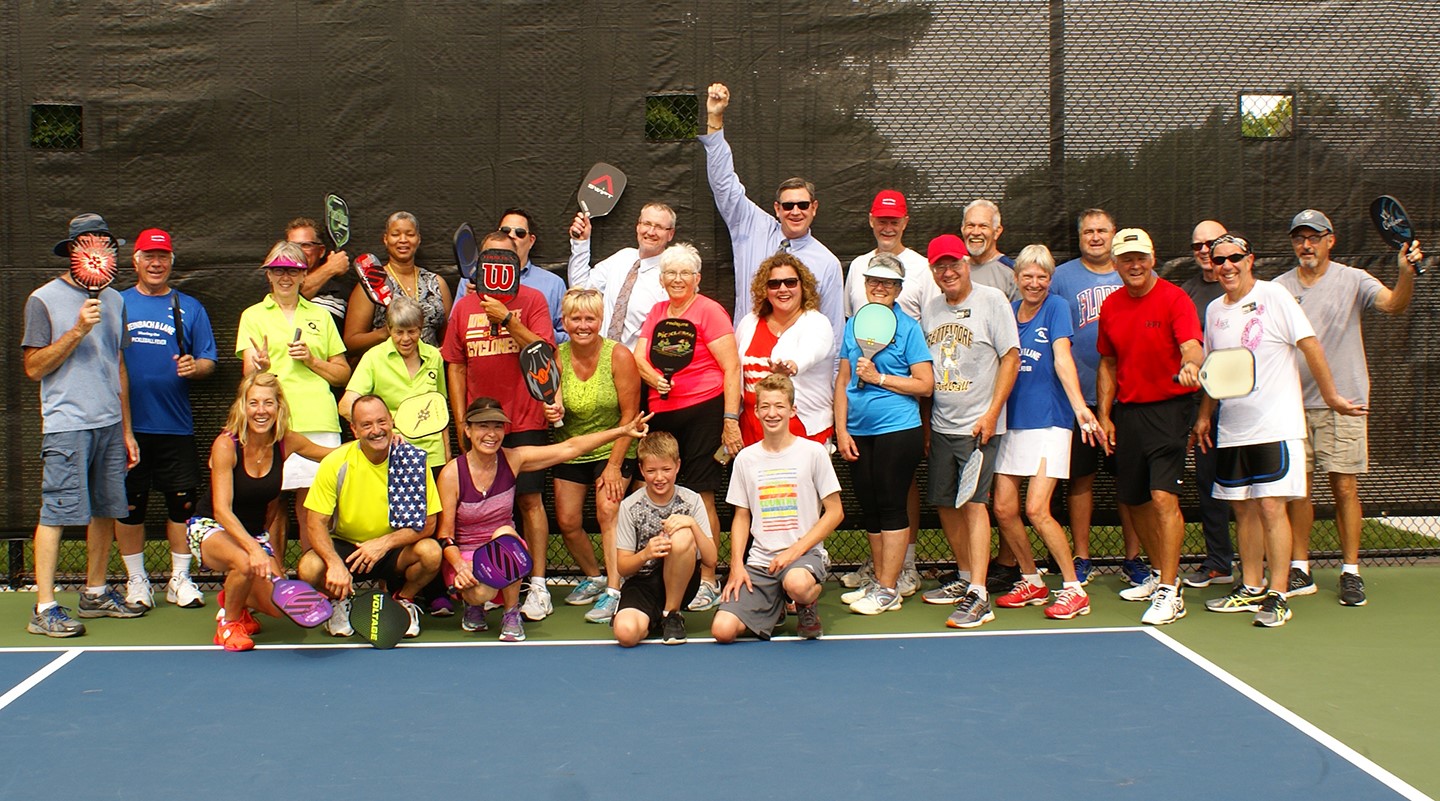 Silvis, Illinois now has 2 dedicated courts — making a total of 34 dedicated courts in the Quad City area. With our indoor venues, we have close to 90 courts available, and pickleball is easily accessible year-round, without the need for a membership in a retirement community or athletic club — although a membership option is available at the Quad Cities Tennis and Pickleball Club.

Growing Pickleball In the Quad Cities

The area has 5 USAPA Ambassadors living in Bettendorf, Davenport, and DeWitt, Iowa; and Coal Valley and Geneseo, Illinois. Although from different towns and across state lines, these ambassadors work very well together, supporting pickleball initiatives all across the QC. Three of the ambassadors are tournament directors. Our Paddlewheel Tournament and the area’s American Cancer Society Charity Tournament are growing in participation each year. Last year the QCPC managed the pickleball games for the regional Iowa Winter Sr. Olympics held in Rock Island. The QCPC also manages the pickleball games for the local Sr Olympics each June as well, where the pickleball event continues to be the largest event in the Olympics.

Currently, we are looking at the possibility of hosting a regional pickleball tournament in the future, and what that would require in preparation. The Quad Cities Tennis and Pickleball Club is a venue capable of handling such a tournament, as well as BettPlex, a regional sports complex currently under construction in Bettendorf. Our cities lie right along I-80 and 1-74, and a local airport serves both United and Delta, making the area easily accessible for our tournamets or pickleball visitors.

Our current president, Larry Miller, has a big vision for pickleball in the area.  Larry is a IPTPA-certified trainer, and has set up a training program for all levels, using local trainers as well as bringing in national pros. Last year Coach Russell conducted a clinic. In June we hosted Dave Weinbach and Stephanie & LeEllen Lane for a clinic. Many of our players are becoming confident and successful tournament players, playing in tournaments around the country.

Community outreach is another area of focus, and our large volunteer base is dedicated to promoting pickleball as well as giving back to our local communities. We offer free beginner lessons on both sides of the river, have held charity tournaments, have had two blood drives, food drives, participated in community health fairs, offered pickleball lessons to our Plus 60 club, and offered youth camps and clinics.

Okay, now to our involvement with youth! 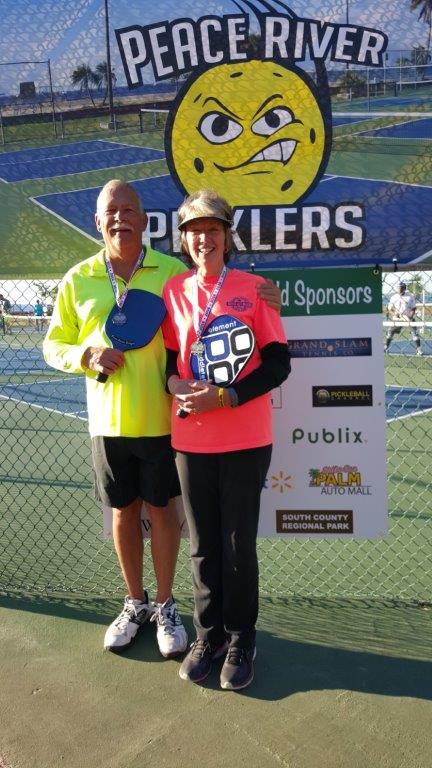 In 2014, another player and I met with the Phys Ed staff at Bettendorf Middle School (from which I had recently retired as a math teacher). Pickleball has been taught at this school since the mid 1980’s as part of a racquet unit, and we thought we could do some volunteer time with the pickleball portion. As it turned out, 17 volunteers from all over the Quad Cities area helped teach pickleball in over 1000 middle schools over the course of 18 days that winter.

In the summer of 2015, we held our first Youth Clinic at our Kiwanis Park dedicated courts in Bettendorf. 40 youth signed up! We had to chalk lines on the nearby tennis courts to make enough courts available. We had enough volunteers to put two on each court, which is great to have on a court of 4 kids.

In 2016, in cooperation with Rock Island Park Department, we offered a four-day pickleball camp at the dedicated courts in Rock Island, IL. We had 11 youth participate in the camp and compete in a round-robin tournament on the last day. This camp was completely staffed by QCPC volunteers.

Our second annual youth clinic, in 2016, saw 32 youth attend with another large group of volunteers. Like the 2015 clinic, it lasted 2 hours, with a break in the middle, and lots of fun drawing prizes at the end. 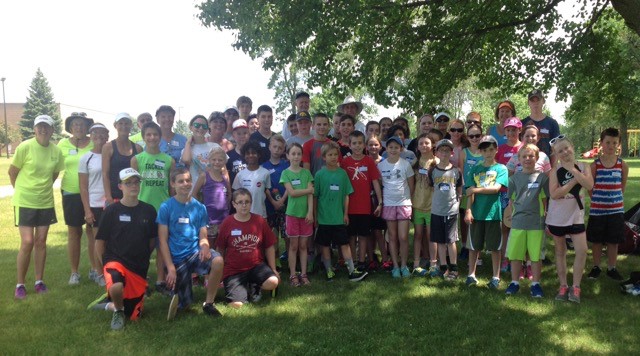 This year, we had our 3rd annual clinic at the new Bettendorf Middle School courts, with 43 coming to that one! This time we didn’t have the extra space, so we had 7-8 youth on a court with 2-4 volunteers per court. 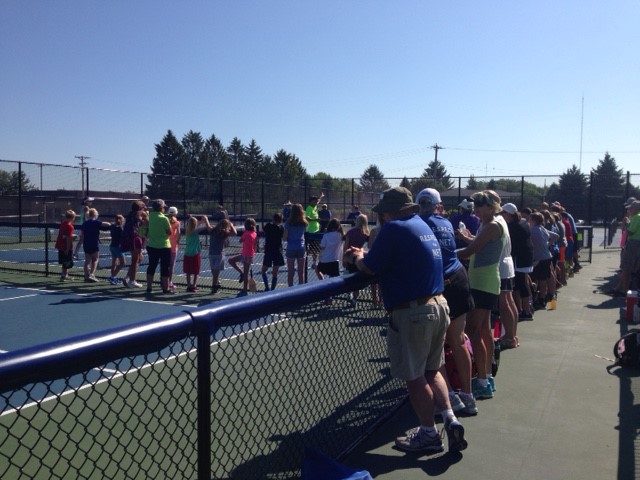 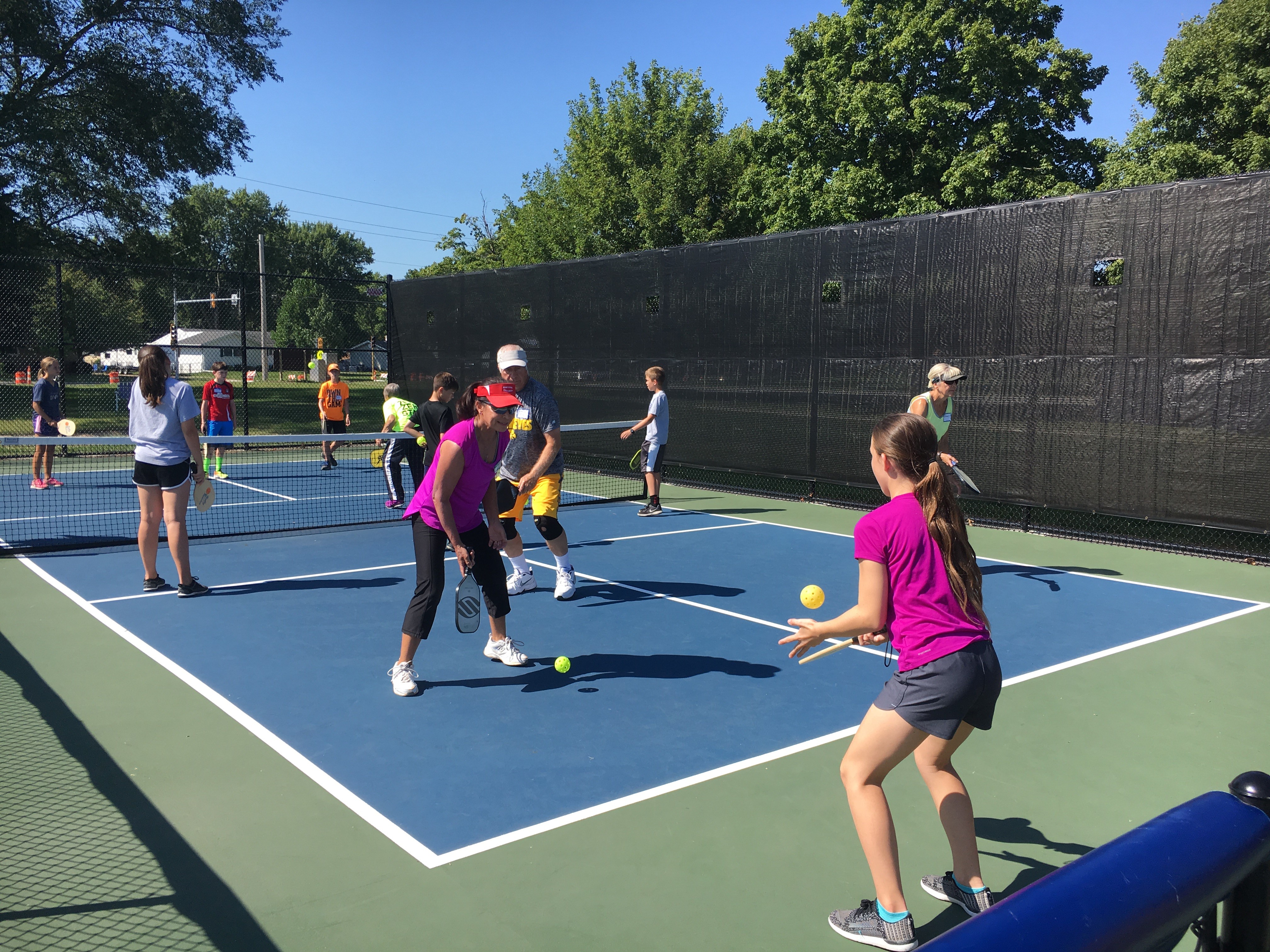 It worked really well, thanks to our volunteer trainers who were quite comfortable with the numbers and creative in keeping the kids engaged in learning skills. For our drawing at the end we had 20 Pickleball Central drawstring backpacks, along with some PC decals, carabiners, etc. donated by Pickleball Central. (Thank you! I think you have that picture already.) We also had 4 Ranger paddles donated to our program by Paddletek, and some small items from Onix. We acquired some local items as well, and each child went home with a prize. 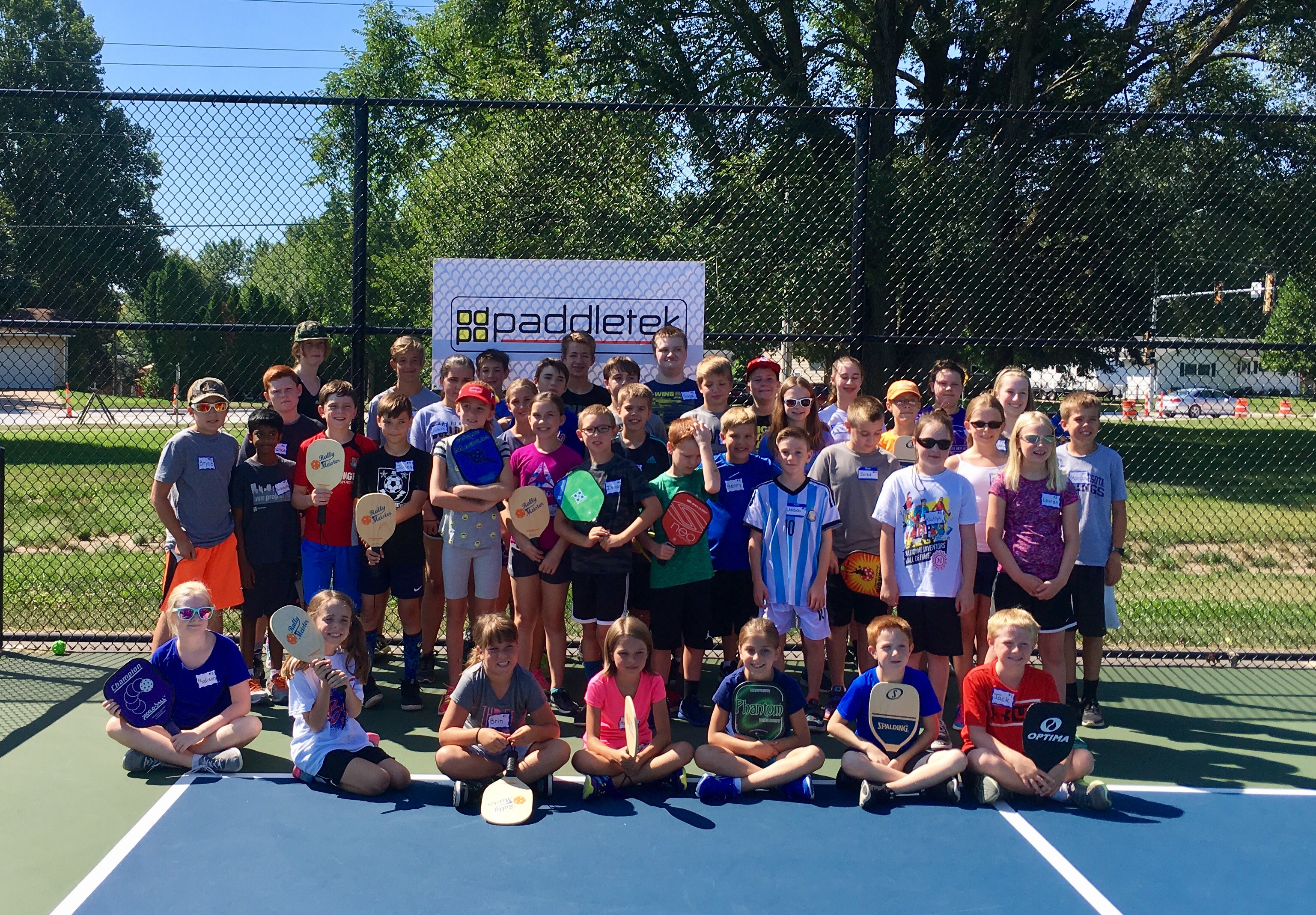 With Larry’s passion for training along with parent requests for continued play after the clinic, Larry set up a class for pickleball skill lessons as a follow-up to our clinic. Sixteen players came to the first class last week. We found that many of the kids preferred to play the game rather than have a formal skill lesson, so trainers gave occasional pointers while letting them play. Another class will be held this coming week, and then with school starting, perhaps one later a Saturday depending on interest. 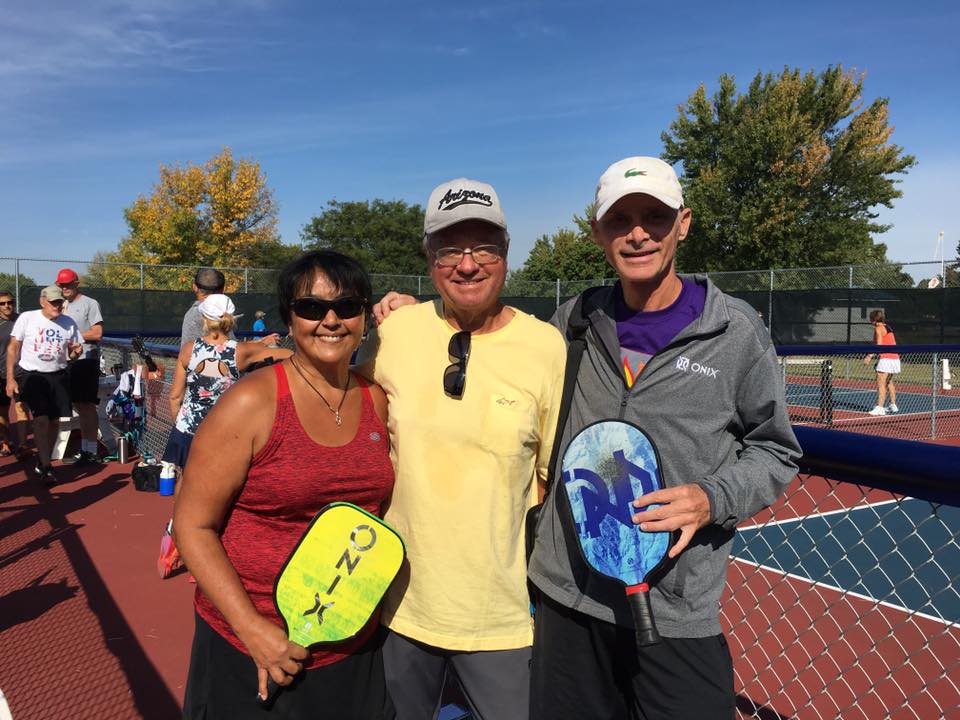 What is exciting and different about this summer’s clinic from previous two years are two things: 1) the sponsor support from Pickleball Central, Paddletek, and Onix; and 2), the follow-up opportunities for kid-play. With Larry’s initiative and organizational help, we extended our youth pickleball program by adding afternoon youth lessons/play times. The original thought was to offer skill lessons, but the youth that have come are showing us that, at this point anyway, they like to get together with their peers and just play pickleball!!