If you’re relatively new to pickleball you might have noticed players making gestures behind their backs and wondered what that’s all about. Particularly in pro doubles matches, hand signals between partners go a long way towards improving strategy. If you'd like to learn about this gestural lingo and improve your communication and teamwork, read on to learn how to use signaling in pickleball.

Why Use Hand Signals?

Hand signals can accomplish several things to enhance your game play. They provide a way for doubles teams to leverage individual strengths, increase communication and teamwork, and surprise opponents. Signals are used most often by doubles partners who are "stacking", to position a specific player on a specific side of the court, regardless of whose turn it is to return serve. Players will stack for many reasons - to put both forehands in the middle of the court if one is left-handed and the other is right-handed, to take advantage of their individual strengths or their opponents' weaknesses, and  to put a specific player opposite a specific opponent.

Pickleball hand signals are executed behind the back or behind the paddle of the partner who is not returning the opponent’s serve, to express where they'll position themselves after the serve is returned. Using a hand signal in this way, partners communicate to each other if they will be switching positions (changing sides of the court) before each return of serve.

Signaling gives the non-returning partner an idea of where their partner will place their return of serve, enabling a better set up for the next shot. If the non-returning partner has signaled they are going to switch, for example, their partner’s return of serve would most likely be hit down-the-line vs. cross court, since that is less likely to result in a cross-court third shot (a harder shot for a switching player to reach).

What Are Hand Signals?

The two most common hand signals that pickleball players use are a flat open hand (meaning “switch”) and a closed fist (meaning “stay”). Some players will also use a third signal occasionally, with the index and middle finger spread in a V-shape (meaning “fake”, as in moving as if switching but then quickly moving back to the original side of the court they started on). These signals are made by the partner who is standing just behind the kitchen line (also known as the non-volley zone or NVZ) while their partner is at the baseline getting ready to return their opponent's serve.

Signaling with the fingers spread apart means “switch.” This tells the partner who is about to return the opponent’s serve that they intent to move to the other side of the court as, or right after, their partner returns the serve. When the non-returning player signals to switch, this tells their partner they will need to quickly run to the other side of the court to cover it after returning serve.

Doing a switch in this way can be advantageous if it is putting the partner with the stronger forehand on the side of the court where their forehand will be in the middle. It also creates an element of surprise, because the opponent who is hitting the third shot (the shot right after the return of serve) is now faced with a last minute decision of where to hit the ball; if their intent was to hit the third shot to a specific player and those players have suddenly switched places, it can throw off the opponent's timing and result in a less offensive third shot. 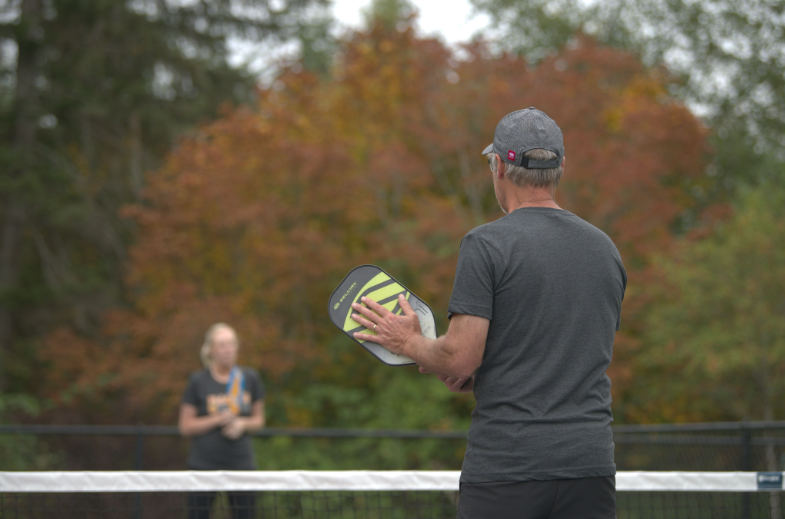 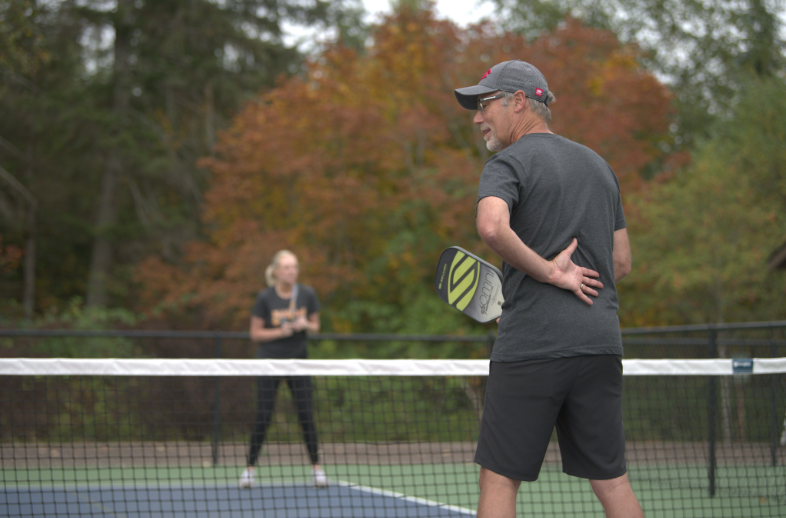 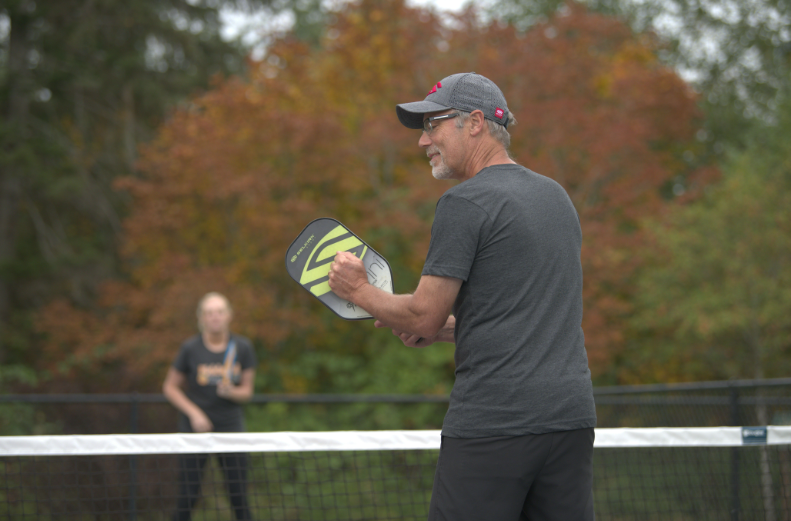 Occasionally some players also use a signal to tell their partners they are going to “fake,” or pretend to switch but then quickly return to their original side of the court. Faking is a way to confuse opponents. They will see movement and likely expect the players to execute a switch, so the opponent will plan their third shot accordingly. At the last minute when the faking player returns back to the side of the court they started on, this may result in the opponent’s third shot not being placed in the intended location or to the player intended.

Generally the fake signal is not used by pro players as they naturally execute movements that might make it appear they'll switch, but they trust their partner knows if they did not communicate a poach signal they won’t switch. The fake signal is seen more often among intermediate players who may not have the same level of confidence and ability to read their partner’s movements. 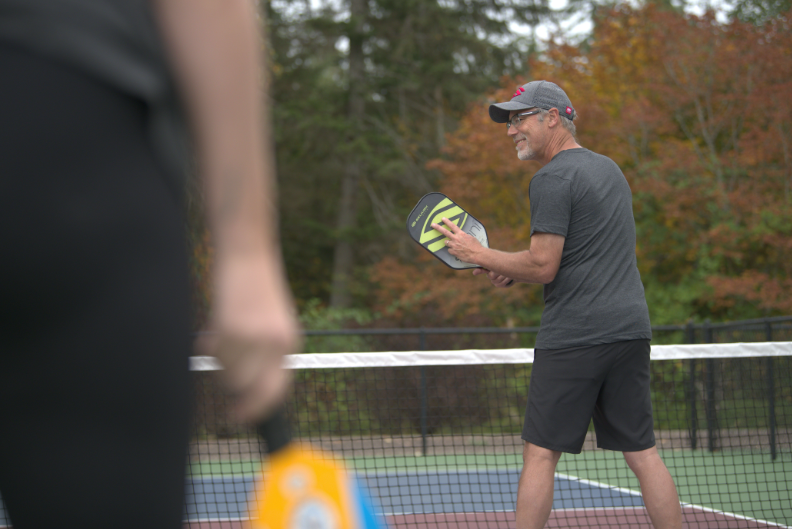 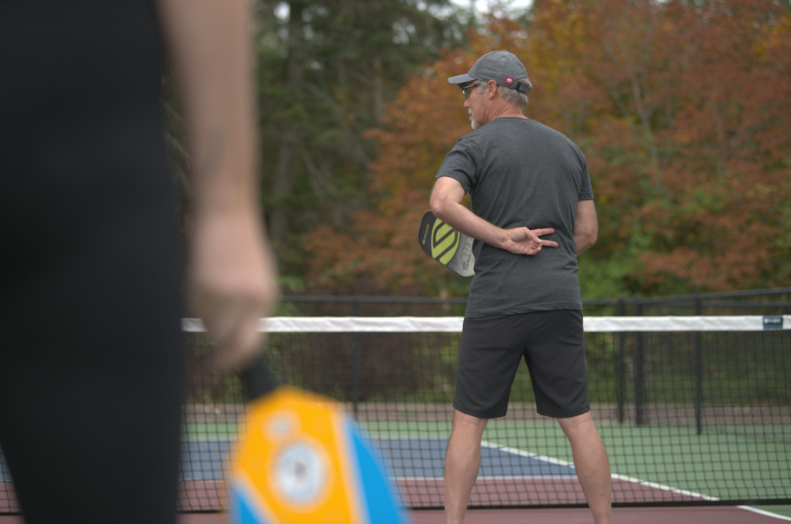 To use hand signals effectively it is important that the player giving the signal keeps the signal in place until they hear an acknowledgement from their partner. Typically the returning partner will say “ok,” “yes,” or “got it,” to confirm the signal. Occasionally the returning partner might disagree with the signal proposed and will override the signal by saying “no,” which indicates to the signaling partner that they will do the opposite of what was signaled. In this instance it is important to go with the ”no” since that is the last communication in the series and determines what position the partners expect from each other.

Once a signal has been given and acknowledged, it is important that the players commit to whichever position was signaled and not make a unilateral decision change mid-shot. Even if the player returning serve is given a difficult serve that might make it hard to switch (for example, if the serve goes wide to the corner pulling the returner far off the court making it difficult to run all the way to the other side of the court after returning), they must still attempt to do the switch, unless an audible call to 'stay' is made, telling their partner to stay in position. If one player aborts the switch without expressing it, both partners are likely to end up on the same side of the court and leave a large opening their opponents can take advantage of.

Using hand signals is an easy and effective way to improve communication with your partner and keep your opponents guessing. To use signals most effectively and not become predictable, it’s best to signal on every point when you and your partner are returning serve even if you are going to stay. If you only signal when you want to do a switch, your opponents will soon figure this out and know what positions you and your partner intend to take, so you will lose the element of surprise.

If you’re feeling ready to improve your teamwork and strategy with hand signals, grab your partner and give it a go. It’s a good idea to practice signaling with your partner repeatedly so that you both get comfortable with the process. Don’t wait until your first few tournaments to give this a try or you might set yourselves up for some unintended mix-ups on who’s going where. Once you get the hang of it, signaling adds another level of fun and strategy to your game and you’ll never look back!