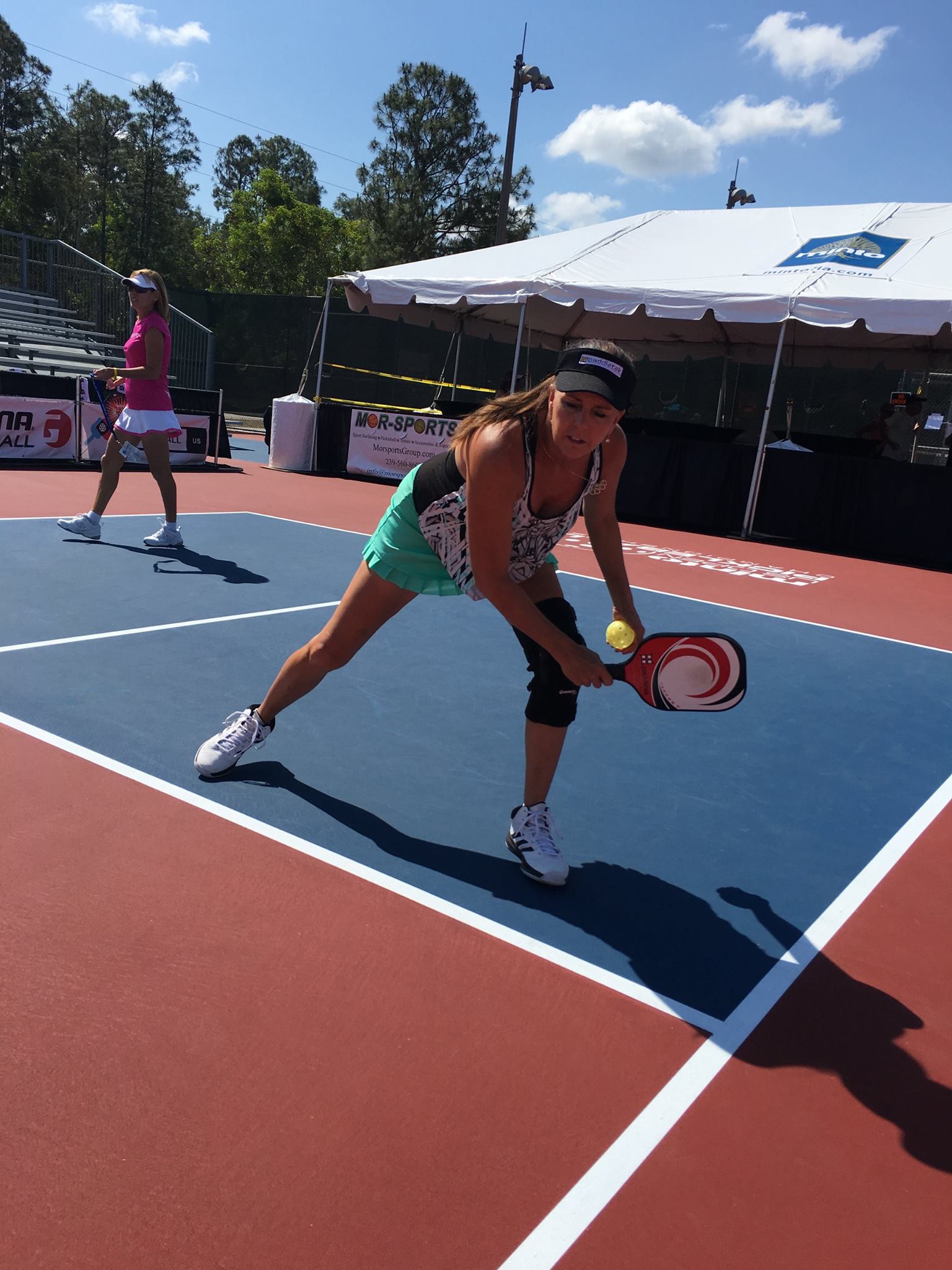 Laura Fenton Kovanda at the U. S. Open

Can you imagine playing a game you had to google on Youtube on your way to the Senior games in Ohio, then ending up at the U.S. Open winning GOLD?  That is part of Laura's story!  Enjoy! 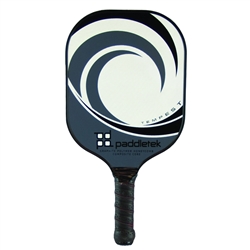 Paddletek Tempest - It's the only paddle I've ever found that not only gives me more power and control, but I get a lot of spin off of it too.  The weight distribution is perfect for me, whereas there are some paddles that are too heavy in the handle or too heavy in the face.  Ever since using this, I've had fabulous results at this year's tournaments.  When playing Racquetball, I literally have used the same racquet for 18 years now - may turn out to be the same in Pickleball - why change something when it's not broken!

When visiting my future husband in Ohio one summer, the Senior Olympics were brought to our attention.  Since the state of Illinois allowed outsiders, along with competing in as many sports as you wanted (I was definitely on board with this, as I was able to compete in 11 sports), we decided to travel to Springfield, IL.  We came across this game called Pickleball, which we had never heard of before, so entered it.  On the way driving, we decided to Youtube it, and then realized we didn't even have any paddles, so called up a friend, who was more than willing to share a couple, since he was headed there as well.

The town of Springfield just happened to have a ribbon-cutting event that night with the mayor to dedicate the courts.  To our benefit, they happened to teach us the rules, a bit of the strategy, and luckily won a gold in singles and a silver in mixed doubles the next day. Unfortunately, the two people who taught us how to play, and who had won the mixed the year before, lost to us in the semis. Can honestly say it was the first time I felt bad winning a match!  Fortunately, we are still very good friends with them to this day!

Honestly, I feel blessed just being able to play!  After years of wear and tear from other high-level sports, back surgeries, knee surgeries, and arthritis - like many of us have, I am thrilled every day I get to walk on a court. But I would always choose fresh air and sunshine over being indoors! 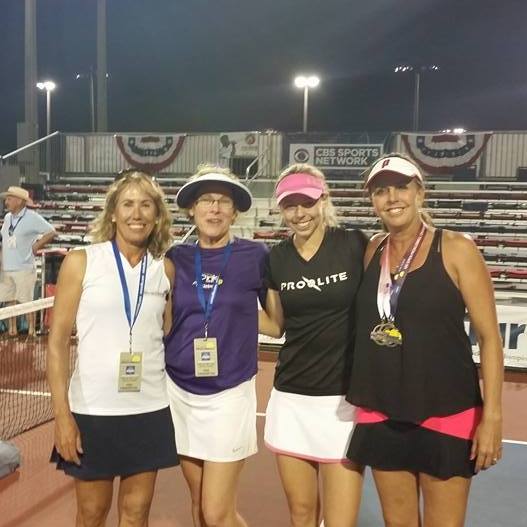 I actually love them both.  If my knees were better, I'd probably say singles, as I like being in control of my own destiny and in putting my own game plan and strategies in play. But that's not to say I don't love doubles.  There are a lot of tactics in this game, with something new I learn after every match. Strategies are totally different in singles play. The greatest asset the Doubles Game has brought me is that I have become a more patient person, even in life.

Anywhere with Water and Mountains.  I 'love' scenery!  In fact, I drive people crazy, as sometimes in the middle of a rally, I find myself just gazing at all the beauty around me. This just happened this past weekend in Brigham City, looking up at the snow-capped mountains, green grass and bright blue sky.  Of all the places I've been and played, though, I would have to say Lake Tahoe in the middle of pine trees and overlooking the lake and mountains in the background is the best. Heaven! 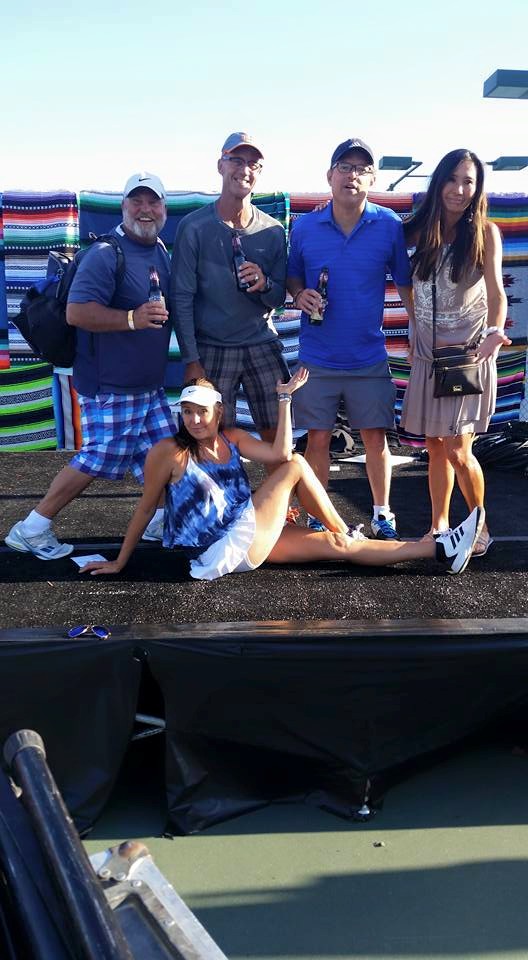 I think the 45 years of competitive sports and 15 years with the US Racquetball Team, along with my background in kinesiology, athletic training and physics, have given me a huge advantage mentally, physically, analytically and how to prepare for matches and tournaments.  I'm not a very serious 'social' player, but that whole demeanor changes when I walk on a court at a tournament.  Mentally, I can play through absolutely anything, but I've also learned how to win when I'm not playing my best. One of my coaches taught me that - that we all 'have bad days,' but the real athletes learn how to win when they're not playing well.  Physically, I'm a bit more challenged right now, as I can't train the way I would like, but I intend for that to change as well.   One of my greatest strengths is the ability to analyze this game to death - the court, the angles, opponent's feet and hip direction, lack of lateral movement, or weak overheads.   But I am far from still mastering everything in this game.  The higher level one plays, the fewer weakness your opponents have.  This is where you have to find the one weakness that particular day.  As for my game, I'm always looking to add another shot (maybe one someone else has) and improving my own weaknesses.  Learning to add top-spin in my dink game and better blocking skills have been my two main focuses lately, as well as building more strength and flexibility in my body.  And if there's any secret from any female out there how to trim the waistline after menopause, I'm all ears!  That part sucks!

I am a retired professor, coach, professional athlete and business owner.  But I may be going back to work full-time. If not, I will be concentrating on teaching more pickleball clinics and lessons, training people here in the states and abroad.

It depends on the week or if a tournament is coming up.  Typically, I'm one who likes to drill before a tournament to fine-tune skills, but I may play one or two days.  I find that if I play too much, I'm not enjoying the play like I would like (since I already trained day in and day out for 15 years). Also, if one plays too much, the skill level tends to go down, and that is being recorded in one's brain.  I know people like to play a lot, and nothing wrong with that, recreationally, but for tournament players, they need to balance the play time with the conditioning off the court.  This way they're hungry when it's time to play a tournament.

In regards to making time to play, it's like anything else - whatever your priorities are, you make time for!

I'm too dang serious and competitive.  So my rituals are more in preparation physically, nutritionally and technically.  As extremely social as I am, I have to be 'alone' before big matches.  I do play a 'big' match through my head in its entirety, prior to even going to the venue.  I also have a pretty standard routine, unless for some reason my schedule gets out-of-whack, say from cancelled flights or some time off because of a cold or flu.

My goals are always to be the very best, no matter what it is I do in life.  Pickleball shall not be any different!

I thank my God above every day that my arms and legs are attached, and to my knowledge, I don't have a terminal disease.  How much better could life be!