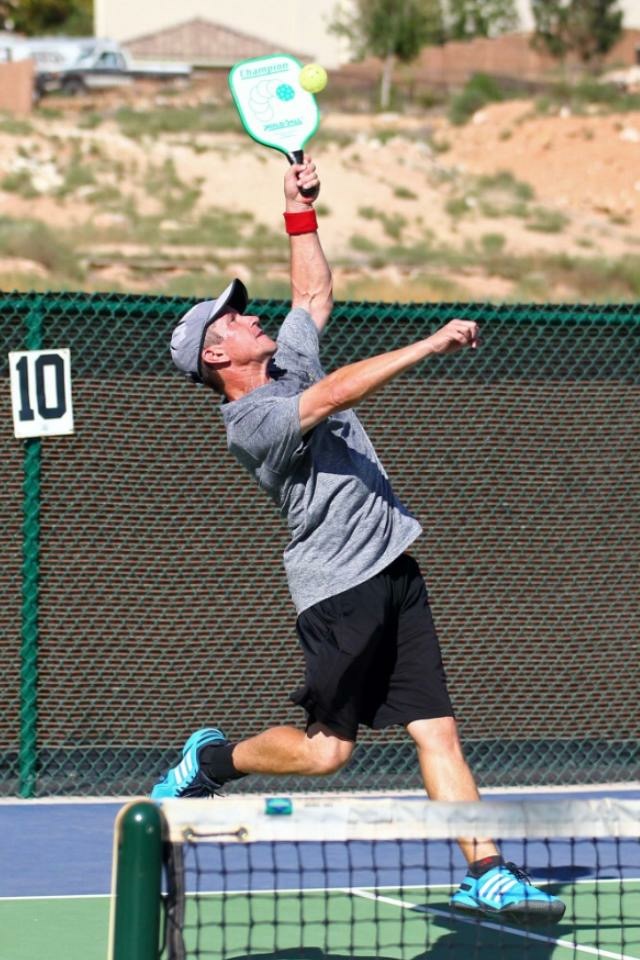 Justin is a Tennis Pro turned Pickleball Pro, and he's the real deal, as nice as he is professional. He's also a member of the '120 Degree Club,' where you have to play in 120 degrees for an hour to be a member. Enjoy! 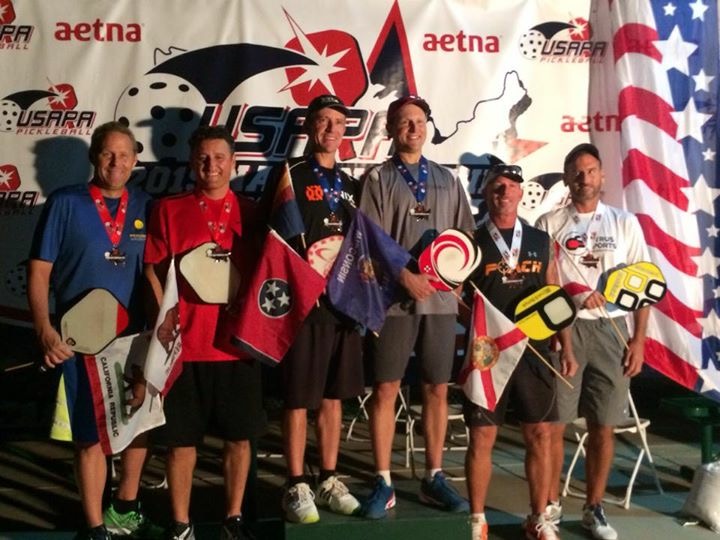 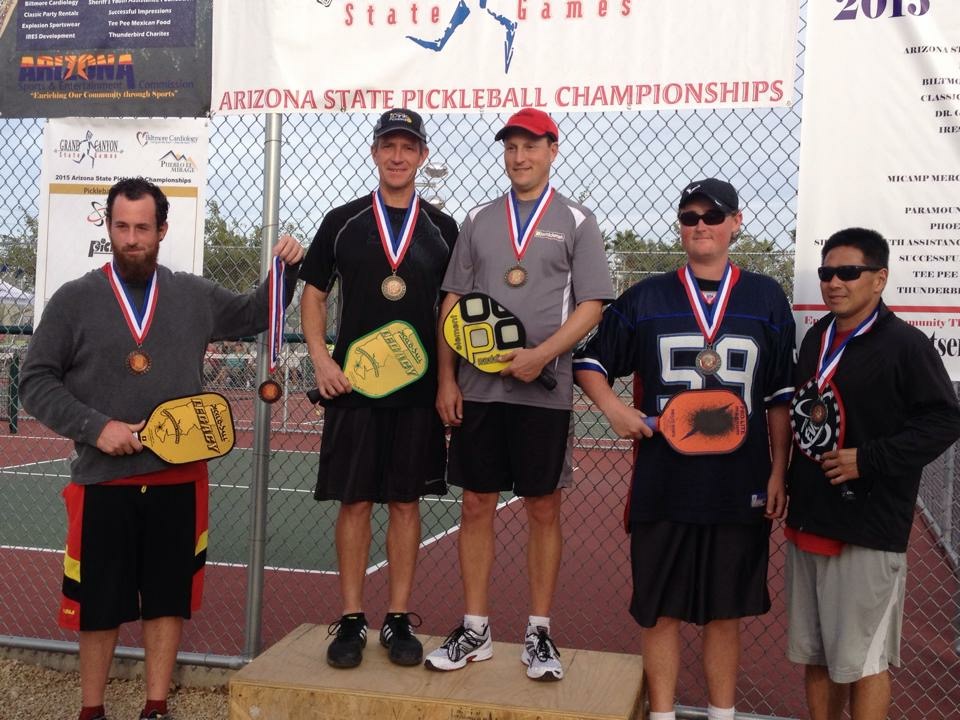 What paddle do you play with and why?
I’ve played with the Pickleball, Inc. Champion Aluminum and Legacy, the Engage Encore, the Onix Evoke Composite. I currently play with the Paddletek Tempest Wave in both singles and in doubles. The Tempest Wave paddle is a good combination of power and touch. Also, I play wristy, with a strong backhand, so a lighter weight paddle like the Tempest Wave is the best paddle for my style of play.

What’s your pickleball story? How were you introduced to pickleball?
I’ve played tennis most of my life. I lettered in high school all 4 years. I got bored with tennis singles, so I went to doubles. One day I was treating a patient who had a knee replacement and all he talked about was wanting to get back to playing pickleball. He inspired me. I had free time so I decided to check out pickleball and try something new. I’ve been playing pickleball for 6 years now and have competed in tournaments for the last 5 years. I love to play pickleball for exercise, fun and recreation. I recently had wrist surgery for tendinitis, so I’ve had to take 6 months off from playing.

Do you like singles or doubles better? Why?
I like singles for the exercise. It’s hard to find anyone that will play singles. I prefer doubles as a tournament game.

What’s your favorite place to play? Why?
When I first tried the Pebble Creek Courts in Casa Grande, Arizona, I loved it. It’s nearby. I also like playing on the courts in Surprise, Arizona. I like the group that plays there. Surprise just broke ground on 8 new courts and the city is footing the bill.

Justin and friends - Friends who play together.... stay together!

What’s your secret sauce? Any tips for players?
Eat like a rabbit; that means small meals between games. Make sure to balance carbs and protein. Eat often. Don’t just play to win. Play at least half of your balls to the best player to get challenged. This helps your singles game. I'm a bit ambidextrous, and mostly play lefty, but have been playing right-handed since the US Open. I prefer to hit forehand whenever possible.

What’s your day job?
I have done in-home physical therapy for 20 years.

How many hours a week do you play? How do you make time to play?
Before my surgery, I played 2 times a week for 2-3 hours. When I was more fanatical, I did 15-20 hours a week. My advice to avoid injury is not play hard for too long, too often. If you play hard and long, take a break. Take a day off. 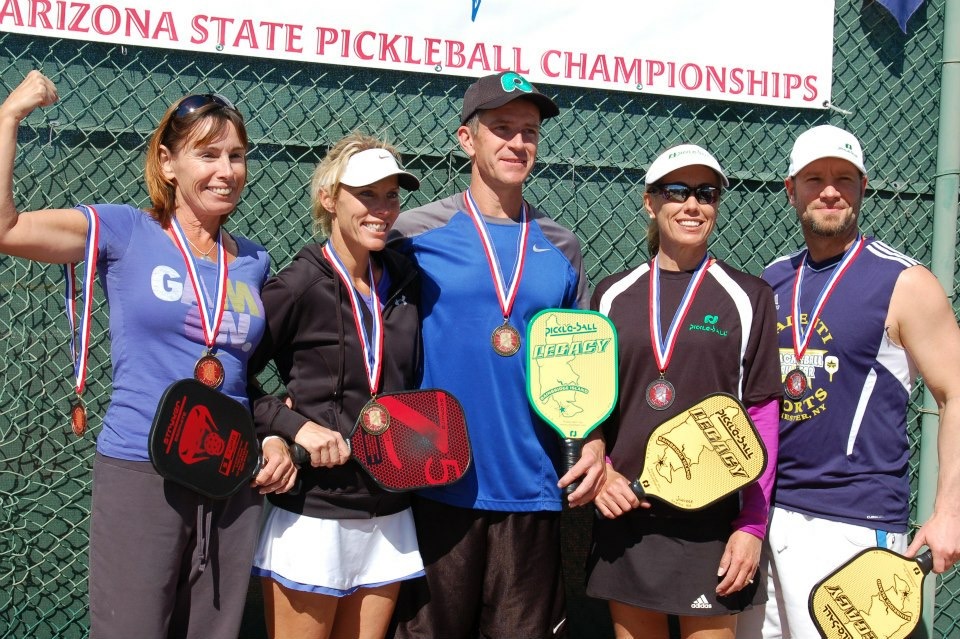 Any lucky rituals before a big tournament?
Just common-sense stuff:
For 24 hours before, no sodas, caffeine
Make sure to carb load the night before
Eat well.
Sleep well.
Don’t play the day before so your legs can stay strong.
Hydrate.

Do you have any pickleball goals you’d like to share?
My main goals are: Get healthy, have fun, enjoy the sport. After my recovery from surgery, I may enter singles events again in the senior bracket.

Anything else you’d like to share about your experience being one of the best pickleball players in the world?
When I compete, I hope to win but expect to have fun. So, have fun and make friends. Friends are what count. Friends don’t ever forget you.