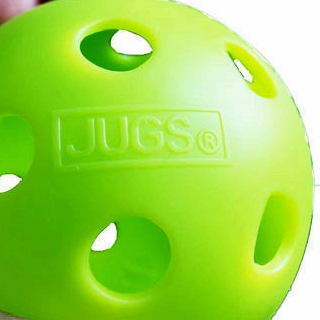 The USAPA has announced that the much-beloved Jugs Indoor Ball is back on the list of approved balls for tournament play PROVIDED they are properly conditioned. They've clarified that the Onix Pure 2 Indoor and Outdoor Balls need to be conditioned prior to use at sanctioned tournaments as well. This is to assure the balls bounce less than 34 inches when dropped from a 78-inch height.

Straight out of the package, the Jugs and Pure 2 Balls all bounce about 36 inches. According to Christine Barksdale, Director of Competition at the USAPA, “Effective January 1, 2018 conditioning will no longer be an acceptable method for meeting bounce height criterion.”

But there is much more to this story for any who are interested...

The Real Story Behind the Announcement

You may think this rule change is much ado about nothing. As a 5.0 tournament player, I can tell you this is not the case. Many players have expressed passionate views about the rule changes relating to balls on social media in recent months. A couple of inches of bounce height is serious stuff.

While USAPA ball rule changes have fueled much of the debate, the melee really began in 2015 with the introduction of new balls like the Onix Pure Outdoor Ball. The original Pure Ball was a yellow or orange 40-hole outdoor ball that was softer and easier to control than other outdoor balls. These are fantastic in many ways. However, because it was easier to control, many top players complained that it equalized play between lesser and better players.

Simply put, many players feel that the Pure Outdoor Ball changes the game in a way that reduces the skill needed for finesse shots. While I personally love both the newer, softer Pure Balls and the older, harder balls (like the Dura Fast 40), I have come to agree with these players’ assessments.

We're no longer dealing with mere wiffle balls; pickleballs have critical characteristics discernible by connoisseurs of the sport. Should we have one ball for pros and another for recreational players? Should there be different balls for juniors vs. adults? Should there be different balls based on the playing surface or weather conditions? Many sports have these variations.

Because some balls (like the Pure 2 and Jugs Balls) bounce higher when new, this creates inconsistent play as the ball wears over the course of a match or two.

The USAPA sought to address this issue while also addressing issues relating to the very nature of the sport. In October 2015, the USAPA  modified the bounce limit from 37 inches to 34 inches.

Their goal in limiting the bounce height was to preserve the tactical nature of the sport which rewards the patience and finesse required to succeed with a lower bouncing ball. The deadline for achieving the lower bounce was first set at May 1, 2016 and later pushed back to October 1, 2016. 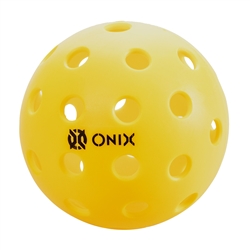 Balls perform differently when used outdoors on hard surfaces compared to indoors on floating wood floors. This further complicates the situation, much like how a tennis ball behaves differently on a concrete vs. a clay or grass court. More on this later...

In response to the 2015 rule change, Escalade (the company that produces the Onix Pure and Pure 2 balls) scrambled to develop balls that bounced under 34 inches.

Their solution was to have users condition the balls prior to use or testing so that they would meet the 34-inch maximum bounce height. As with many innovations, the law of unintended consequences reared its head.

The first conditioning process published by the USAPA involved squeezing each ball by hand 6 times in 16 different places, for a total of 96 manual squeezes.

For me, thumb tendinitis sets in after conditioning only 2 balls!

Imagine the problem of trying to figure out how to condition 250 balls prior to a tournament. Innovative tournament directors were faced with the challenge of addressing this with a variety of “home remedies.” I’ve heard stories of some really creative attempts to condition balls using clothes dryers for instance.

What’s the right setting? 15 minutes on the perma-press cycle? These approaches were interesting, but largely unscientific and unrepeatable.

Fortunately, the USAPA is sorting this all out. They opened up dialog with the manufacturers to put the burden of consistency and science back where it belongs—on the companies producing the balls.

While design differentiates indoor and outdoor pickleballs, the biggest changes in performance are determined by playing surface. Most outdoor play is on asphalt or concrete; most indoor play is on wood or carpet. More indoor facilities are accommodating pickleball on tennis courts, and outdoor balls are generally used because of the harder surfaces.

Popular outdoor balls are heavier and have 40 smaller holess. They perform better in windy conditions and on abrasive surfaces. Indoor balls are lighter and have 26 larger holes. Indoor balls perform well on smoother surfaces with no wind. But here's the catch: Wood floors absorb more energy, resulting in a much lower bounce compared to concrete or asphalt.

The Jugs Ball is the most popular ball for indoor play, and though it bounces over 36 inches on concrete when new, on wood floors it bounces less than 34 inches. The same is true for the Onix Pure 2 Indoor Ball. This is why most of the debate underway concerns the Pure 2 Outdoor Ball used on asphalt or concrete. The Onix Pure 2 Outdoor Ball actually bounces 36-37 inches on the surface for which it is intended: asphalt or concrete.

As a tournament player involved with a retailer that sells more pickleballs than anyone else in the world, in my own unscientific sampling I found most 5.0 players prefer the original Dura Fast 40 balls for outdoor play. (In the interest of full disclosure, this same retailer acquired the Dura brand in August 2016.) 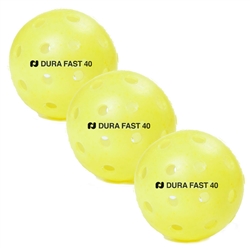 The Dura Fast 40 Ball was developed in 1980 by Pickle-Ball Inc working closely with a family that specialized in unique high performance plastics manufacturing who had also taken an interest in pickleball. The ball was developed specifically for outdoor pickleball play on concrete or asphalt courts. The rotomolding and drilling process produces a geometrically precise ball with a smooth finish and attractive appearance.

This has been the primary outdoor ball for decades, and most players love it. But this type of ball demands real finesse. Players who have mastered this ball are recognized as deserving their 5.0 ratings. Their ability with this ball sets them apart, and they require no conditioning.

Many other balls have been introduced over the years. Most of them have suffered from a variety of issues including cracking, unpredictable flight patterns, a tendency to go out of round and unusual playability at certain temperatures.

Designing a plastic orb that performs after thousands of high-speed impacts with precision over time, in a variety of weather conditions, is a truly difficult scientific endeavor.

Pickleball evolved around a specific set of playability characteristics, and the USAPA is seeking to protect the integrity of the sport. 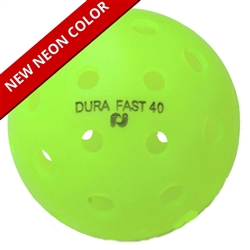 Other sports have had their own issues with equipment. Golf has long suffered from issues with changes to golf balls. Aluminum and corked bats have changed baseball, and many would not say for the better. Remember “Deflategate?” Who would have thought that a half a pound of pressure in a football would have the consequences it did?

Large, well-financed companies have attempted to reproduce the magic of that breakthrough Dura Ball. For example, Wilson launched their similar outdoor ball prior to the US Open in 2015. They believed it would have similar bounce characteristics as the Dura Balls, but they found that the chemistry and manufacturing process was hard to master.

They quickly discontinued the ball due to out-of-round complaints a month prior to the US Open. Players loved the visibility of that new ball, but disliked the irregular bounces, and sometimes no bounce at all!

The holes are not drilled but formed in the mold. Each half is molded and the two halves are glued together. The chemistry of the materials and the injection process results in softer balls that bounce higher initially.

These softer balls are easier to control for many players. However, many tournament players, 5.0 pros and pickleball purists disdain them. Tennis players generally prefer the softer balls because they are more responsive to spin.

Do we want to give elite tennis players—already dominating the sport—even more advantage?

Injection molding is a proven way for plastics engineers to create high quality predictable products. While I’m not a materials scientist or polymer engineer (though I am an engineer), what we’ve heard is that the plastic material itself has to have certain characteristics to flow into the molds.  These characteristics manifest themselves in the way the balls bounce out of the package. After stress relieving (aka conditioning), these balls bounce less.

The Cosom Fun Ball was the leading indoor pickleball.

Changing the chemistry of injection molded balls to make them bounce less is simple, right? We'll see. Remember the Cosom Fun Ball which dominated indoor play for years? In my first tournament in SeaTac directed by Mark Friedenberg in 2013, the Cosom Ball was used.

In hard play, most balls would not last a single game before breaking at the seam. The boxes of broken balls at the conclusion of the tournament would have filled a mini van! Achieving great performance and lower bounce may prove a significant challenge for Jugs and Onix.

Where do we go from here? During my research for this blog post I’ve heard a wide variety of opinions.  I’ve had the great pleasure of speaking with dozens of 5.0 players, manufacturer’s representatives, testing personnel at the USAPA and scientists working at the epicenter of this great debate.

Some suggest the USAPA stipulate the exact materials composition and characteristic of indoor and outdoor pickleballs just like baseball does for balls, while others say that only the playability characteristics be defined by the governing body (like in golf.)

Fortunately the USAPA is taking the lead in helping clear up this controversy in an effort to maintain the integrity of the sport. To that end, they have committed to further clarifying the rules relating to ball specifications, plus they have engaged the services of a new professional engineering testing firm to assist in making sure products used in sanctioned tournament play reflect the characteristics that assure long-term success for our sport.

Ultimately the market will decide what type of balls are used. The one thing I know is this—whenever I get a new package of balls to test from some new company, I'm eager to get on the court and try them out! In 2016 I saw the introduction of several new balls from Paddletek, Gamma and others, and I had a great time getting to know these products firsthand. As a player, I say, “Let the battle for ball supremacy rage on!”

When I think about it, these aren’t just wiffle balls. They are the core DNA of our sport, and innovation in this aspect of our game is exciting and controversial stuff.

I really want to know what you think. Please post your comments here or on our Facebook page. Let the marketplace hear your voice as well.

Glen Peterson is a retired engineer who spent a successful career at Caterpillar. He is a 5.0-rated tournament player who has had earned dozens of gold, silver and bronze medals at the USAPA Nationals, the US Open and other tournaments. He now works with PickleballCentral in a variety of product management roles and is sponsored by Selkirk Sports, whose paddles he uses in competition.