Poaching, which involves one player moving to take a shot that was hit to their partner, is a fairly common technique in pickleball, especially at higher levels of play.

Some picklers rightly assume that poaching can be frustrating to your partner if done indiscriminately. After all, those balls were intended for them and there should be a certain level of trust between both players. However, in high stakes scenarios like tournaments where one player is often heavily targeted (either due to a lower skill level and/or to try and fatigue half of the competition), poaching can be a necessity to avoid burnout.

So when should you make a move to cover your partner? We discuss the best circumstances below:

1) If your partner is out of position.

The best and clearest instance of when you should poach is when your partner is having to really exert themselves to cover their side of the court. Maybe your opponents hit a tricky shot right at your partner's feet and there's no way they could recover fast enough to chase after it. The ball was lobbed and they're facing the wrong way. They're struggling to follow the ball's spin. In any of these situations and similar scenarios, if you see the opportunity it's safe to say you should take it to avoid losing the point. 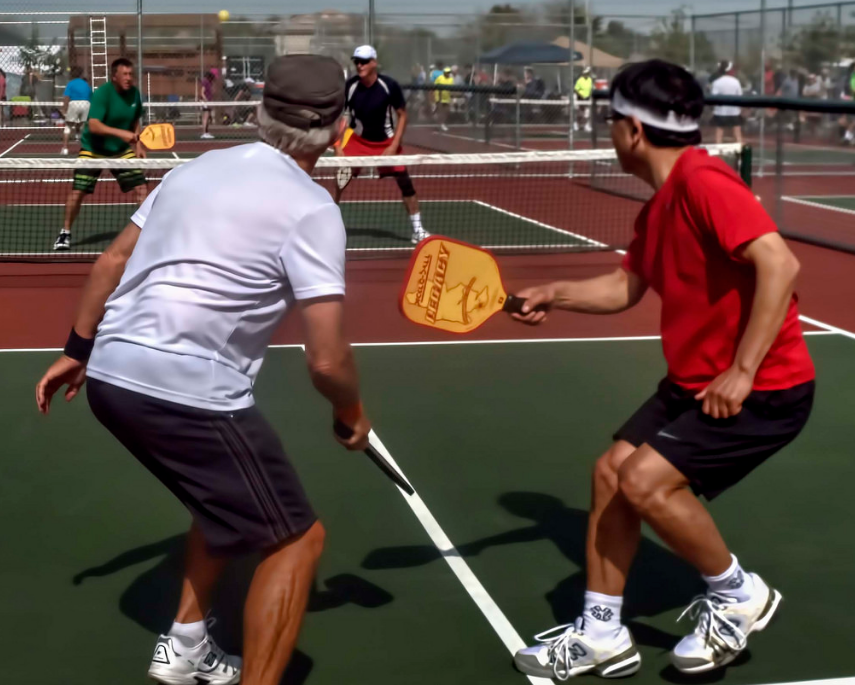 If he's a rightie, the player in white should normally take this shot. (Credit: Michael and Sherry Martin)

2) If the ball is coming toward your forehand.

It's easier for most players to hit with their forehand. When you encounter those annoying shots down the middle of the court, or even if the ball is heading slightly to your partner's side, if your dominant hand is in position then you'll be able to reach it more easily and return it with more 'zing.' The same goes for your partner as well. When you switch sides on the court, try to allow whoever has the 'power position' to take advantage of their role, unless either of you has a killer backhand.

3) If your opponents are being consistent.

Has the other team been reliably targeting your partner? It's tougher to tell what your competition's plans are at the start of the match, but if it's obvious they're trying to wear your partner down, it's likely time to start drawing some of the heat away from them. Start slipping over to their side and changing up the pace of play in order to throw the other team off their game.

As always, be respectful of your partner and be sure to discuss strategies with them and if they mind you poaching before starting a game. You may find that when you're the partner under fire, poaching can be a saving grace!

What experiences have you had poaching or being poached, and is it a technique you like to employ during games?