Pickleball mania is spreading! How do we know? PickleballCentral was recently contacted by a group in Dublin, Ireland who wanted to know what they needed in order to get started playing. That made us think there may be others out there who want to get started with this addictingly fun sport and need a rundown on the basics too. So, here’s what we told our friends across the Atlantic: 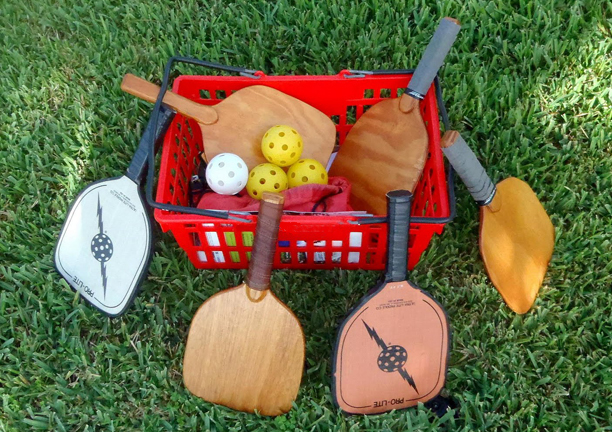 Here’s the basic equipment you need for pickleball: net, paddles, balls, a place to play, and a desire to have the most fun you’ve had in years!

You can play indoor or outdoor, on a flat surface that’s at least 20’ x 44’. That’s the official court size, but we recommend a little extra space all around the playing area for player movement.

Pickleball courts are the same size as badminton courts, so if you have access to badminton courts you’re in luck. Tennis courts can also easily be temporarily converted, and the USAPA has an easy-to-read article on how to do that here.

If you’re converting badminton or tennis courts for your game, you don’t need to worry about nets. If you’re setting up a new court from scratch then you will want to invest in portable net systems. They cost $160-170 and can be set up and taken in down in about 5 minutes and come with a carrying bag for transport/storage.

So, a low-cost set of equipment with wood paddles to get you going would cost in the range of $250.  Not too bad to get started in the fastest growing sport in the U.S., now spreading like wildfire around the rest of the world!