Daniel Moore and his father, Scott Moore, have been popular pros around the tournament circuit for years now. But even we were impressed when we found out just how far that circuit actually runs!

Daniel has only recently returned from a whirlwind of pickleball-related travel ranging from London, France, Spain and Japan to the recent USAPA Nationals, where he won three bronze medals in the age events, along with silver in the mixed doubles open event with Simone Jardim and gold in the men's doubles open event with Matt Wright.

It would be wrong to say this jet-setting lifestyle is a recent development. Daniel grew up in Japan for 16 years before moving to LA, where he then studied abroad in Mexico before traveling to Kenya to work at a social enterprise organisation. 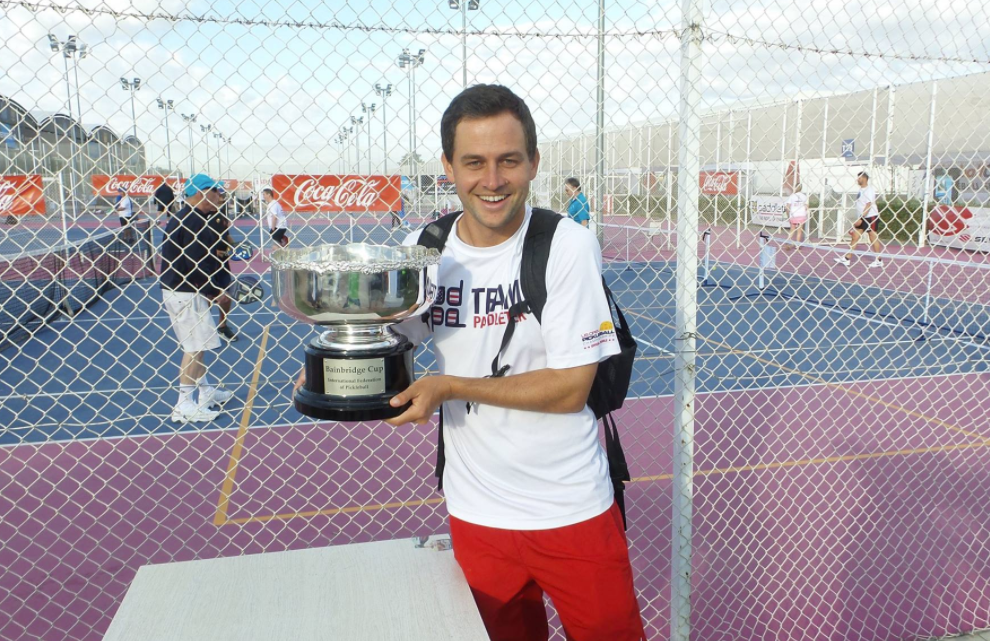 Not wanting to give up pickleball or travel, what was the Moore family to do? Run a pickleball tourism company!

Today, the Moores (including Daniel's mom, Susan) manage PickleballTrips.com where they lead groups of picklers to beautiful international locations to see the sights, meet friendly locals and of course, test their pickleball skills on foreign soil. Such destinations include Mexico, Spain, Vietnam, Thailand and Daniel's 'home away from home,' Japan.

Working not only as an official Paddletek representative but a tour leader for WalkJapan, Daniel has extensive experience finding great locations to share off the beaten path.

We feel extremely fortunate Daniel made time amid his busy schedule to share his work and why he believes picklers should broaden their horizons by signing up for a tour. Enjoy the interview below!

PBC: How did you and your family decide to start Pickleballtrips.com, and what sort of difficulties have you faced?

DM: My dad and I got involved in pickleball a few years ago. I was already in the tourism business in Japan, bringing international tourists over for walking tours of the Japanese countryside. So doing a pickleball trip to Japan was the first obvious step. We both liked travel and pickleball, and pickleball trips was an excuse to get paid for being able to do both of those things.

Obviously there is a lot of hard work that goes into the trips, but that’s just part of any business. After Japan though, we kind of said, why can’t we do this all over the world? Doing camps across North America was the easiest place to start since that’s where my dad is based, and from there we have branched off into Spain, Mexico for now, with hopefully a lot more destinations in 2019. 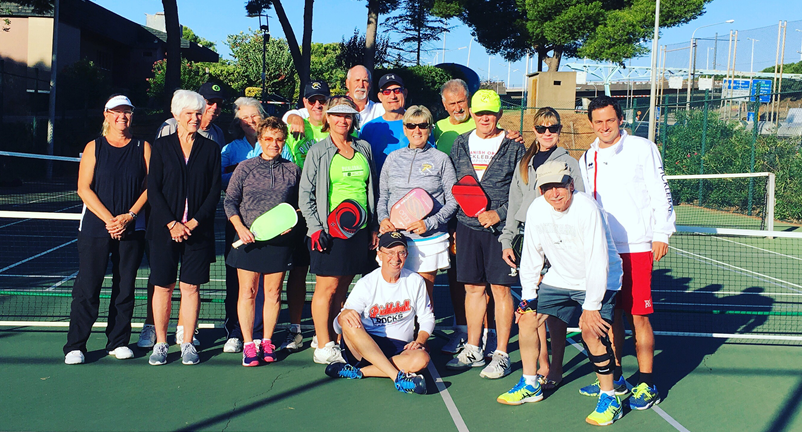 PBC: What are some of the things you think separate the typical “tourist experience” from a trip that stays with people on a more meaningful level?

DM: Our trips are totally different from your typical sightseeing vacation because we endeavor to do three main things. First, our customers receive top notch instruction from certified professional pickleball players. The instructors are usually myself and my dad but we are branching out and bringing in different pros on the trips.

Jennifer Lucore is coming to the May 2018 Japan pickleball trip, for example. Everyone has a slightly different perspective on teaching so we want to provide that as well as the chance to come on a trip with different top players. Second, we connect people around the world through pickleball. We give our customers the chance to grow pickleball in a new country while making friends and doing things most tourists would never be able to do.

I think this is a huge reason why people come back on multiple trips with us: the relationships with local players and other participants on the trip. Finally, we do a few typical tourist activities because some places are popular for a reason!

PBC: Are there any particularly fun or amusing events that have stood out to you during your previous pickleball trips to Japan?

DM: On this year’s Japan trip we had a karaoke party in Osaka that was absolutely insane. After karaoke, we played bingo and the locals had prepared these gag gifts that our customers wore. You can see the photos below for the result. :)

The language barrier can slow things down, but I speak fluent Japanese and Spanish and translate as much as I can. Hotels, trains, restaurants and so on are pretty English-friendly. The local players don’t always speak that much, but pickleball is a common language and people manage fairly well.

I find that hand gestures and a desire to communicate will take you a long way when traveling internationally and people appreciate any effort to learn their language.

PBC: What are some of the main things your groups have taken away from their experiences in Japan?

DM: Being able to help spread pickleball across the world is a huge benefit for our trip participants. People feel like they are part of something bigger than just improving their own game. And like I said previously, it really is about the relationships formed with local players and other people on the trip.

PBC: You wrote about your first time introducing pickleball to Japan and experienced some difficulties, but it turned out to be a learning experience. How have things progressed and what does the pickleball scene look like these days?

DM: Pickleball in Japan right now is still small but definitely growing. We have about 5 clubs between Tokyo and Nagano Prefecture, where I live. I would guess that over 1,000 people have actually played pickleball and around 250 are playing consistently.

The hardest part right now is not court space (every gym in Japan has badminton courts lined) but finding someone to manage the local clubs. The goal is to grow the number of clubs across the country and get people playing consistently, not just one time. 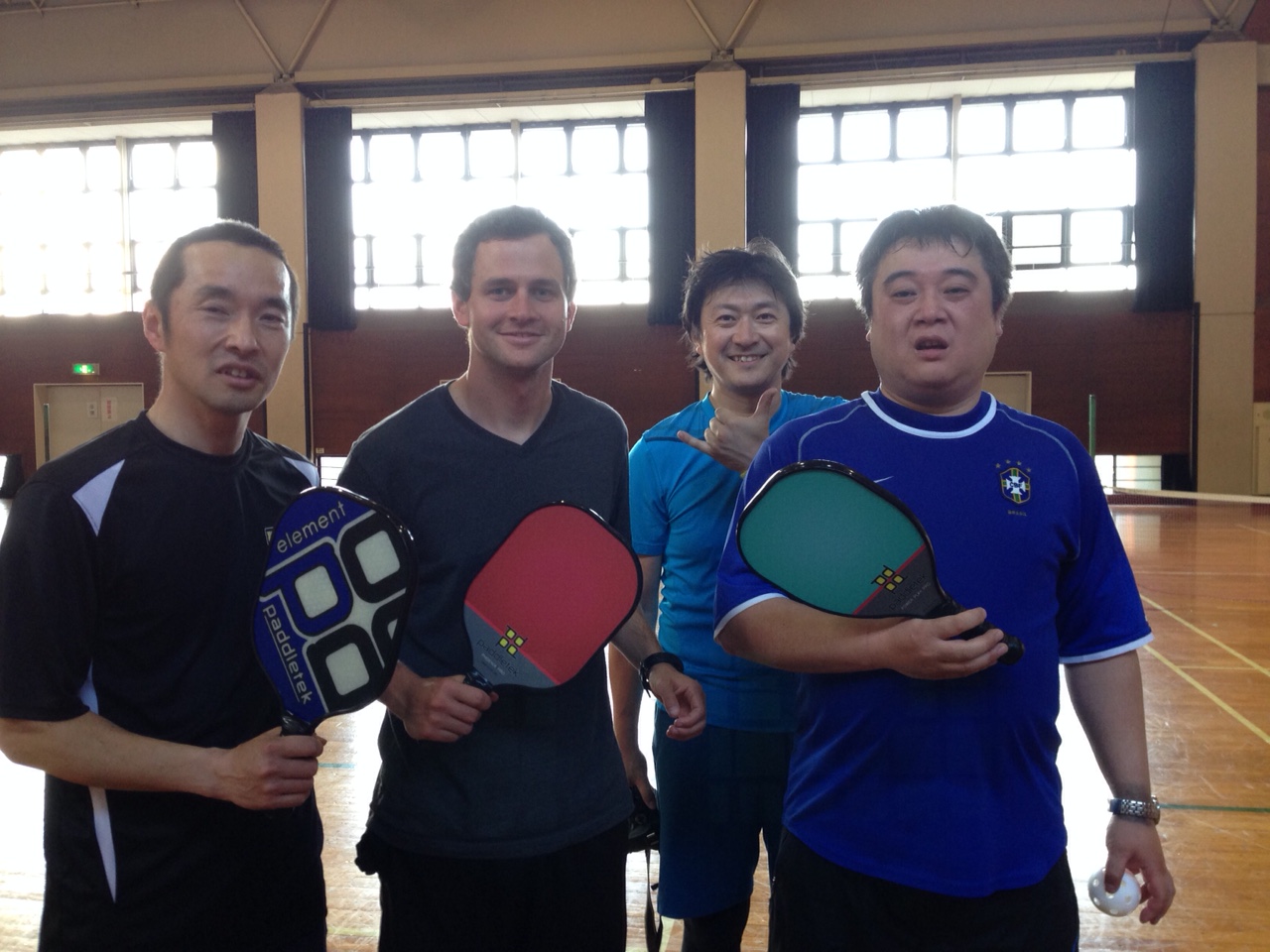 Daniel at one of his first pickleball events in Japan

I travel around a lot, but funding and time are always issues. The JPA (Japan Pickleball Association) has done a great job translating materials and introducing people to the sport, though, so I think it will continue to grow steadily.

We have a pretty diverse mix of sports backgrounds that people come from. Badminton and table tennis are big in Japan, but probably because of my tennis background, at the moment we have more people who came from that. And just like in the States, we've had people join who have never even played sports before, which I think is awesome.

PBC: How have you managed to get the necessary funding and equipment over to Japan? Has it mostly been a labor of love?

That seems to be how it always is though; someone has to do it for a while out of a love of the sport before you see any results.

PBC: It looks like the Hachioji PBA has really taken off! If someone was visiting Japan on their own, would they be able to drop by the club for practice?

Yes, Hachioji is probably the biggest club in Japan right now, but Saku is up there too. Hachioji has been playing the longest so they have that advantage. But mostly it’s the dedication of people like Makoto Sato who organize play and manage the club.

At first everyone was playing at one location but as the number of people has grown, they've expanded to multiple gyms and play almost every day of the week. It's also branched off into places around Hachioji like Yokohama, so that's cool to see.

They love having people join! Hachioji is actually on the USAPA places to play, but the best way to find out about the time/location is to e-mail Makoto directly, makoto.sato@jpickleball.org.

Some solid play from locals at the Hachioji Club

PBC: We noticed you were covered in the newspaper/on TV during a trip to an Okayama school. What was the response from kids and how did the opportunity come about?

DM: A friend of mine had a connection with Mimasaka University in Okayama Prefecture so we went down to teach a PE class. The students absolutely loved it! We taught about 80 kids in 3 different classes and they want us to come back sometime next year.

High school students in Japan are pretty busy with their traditional school sports and studying, so the goal is to get it into college campuses across Japan where kids have a little more free time. Then when they graduate and move around the country, hopefully they'll take pickleball with them. 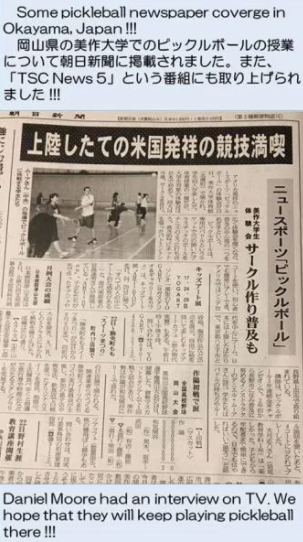 PBC: Is there anything you’d like to add about your tours or pickleball in Japan in general? Why would you recommend people sign up for a tour?

DM: The pickleball trips we provide are experiences of a lifetime. Japan can be a little tough to access on your own, but through our tours we can show you how beautiful and welcoming it really is by getting a local's perspective. It's an amazing place you won't want to miss!

If you're curious about other locations as well, please check out our site because we have many more trips on the way, especially starting in 2019. I’m thinking China, India and Kenya…

At PBC we greatly appreciate the Moores' contributions to the pickleball community and believe these irresistible tours are packed with value. Want to see the world while enjoying your favorite game?

Sign up at PickleballTrips.com (click the images to see full itineraries) or surprise friends and family with an experience they'll never forget. They will be visiting Japan twice in 2018 in May and October.