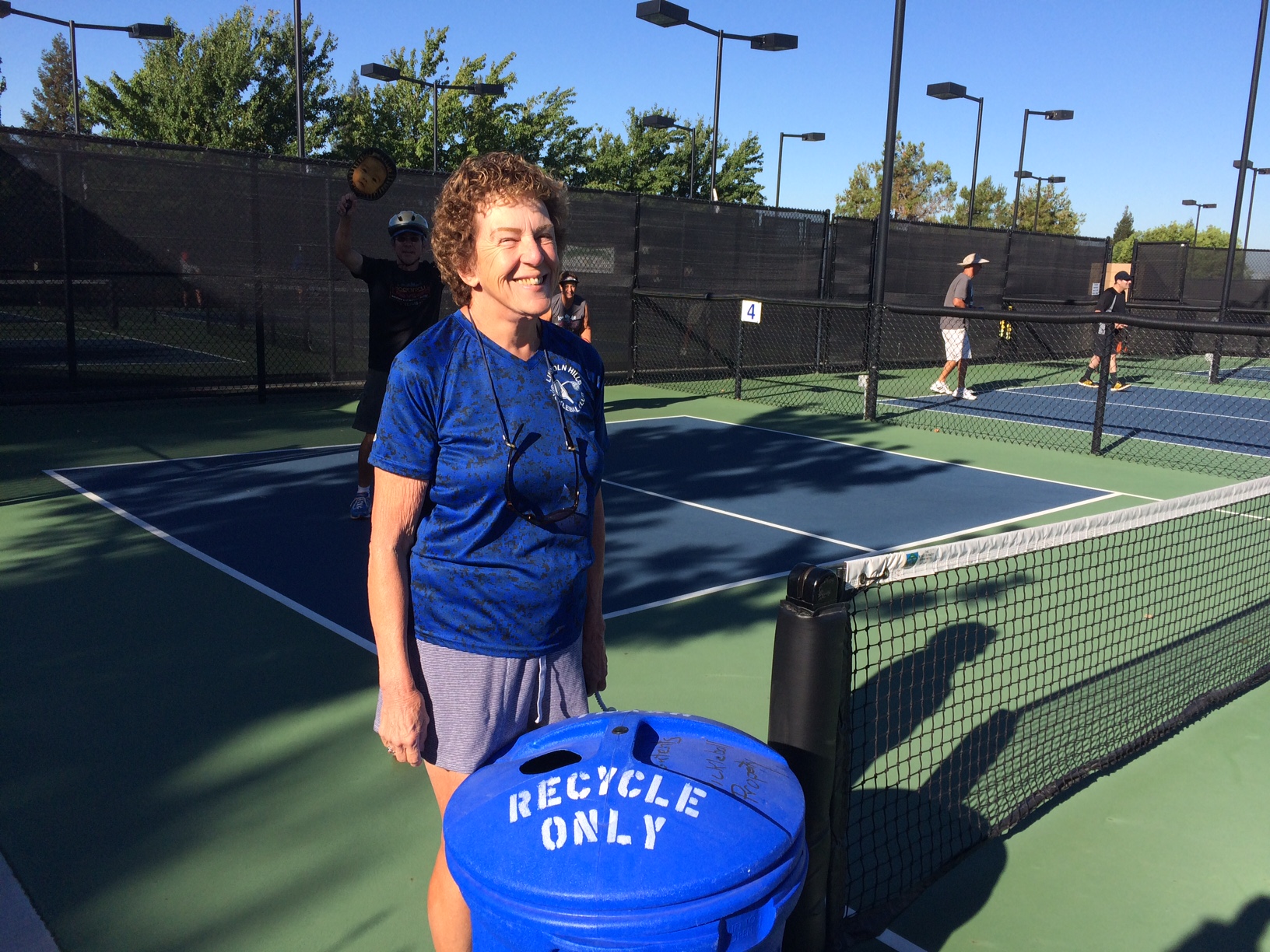 Mona Wheeler, a charter member of the Lincoln Hills Pickleball Club, raises money for local causes by recycling bottles and cans left on the courts.

It’s difficult to pick our favorite thing about pickleball, but if we had to choose it’d be hard not to say it’s the caliber of people the sport attracts. Case in point? Mona Wheeler of Lincoln, California. A tireless retiree, Wheeler spends her free time raising money to benefit others—and the environment.

It started a few years ago when Wheeler, a member of the Lincoln Hills Pickleball Club, got a pretty great idea: gather all the cans and bottles left around the courts and start trading them in for cash. “I just saw all these used drinking containers going into the trash can and I thought, 'That’s a lot of money we’re throwing away and a lot of waste going into landfills,’” said Wheeler. “There had to be something better we could be doing with all that waste.”

So she set up a blue collection bin for recyclables next to the courts and started encouraging people to throw their bottles and cans in it instead of the trash. Whenever the bin filled up she took it down to the state collection center in exchange for $.05 per can or bottle.

The idea caught on and within a year Wheeler had raised $500. She turned the money over to the board of the Lincoln Hills Pickleball Club with instructions to donate it locally, and the board decided to distribute it to foster kids who had aged out of the system and were attending a nearby college.

Word spread and Wheeler’s second year of gathering recyclables was even more successful, with her efforts bringing in $1200 that was distributed between Placer County Food Bank, Lincoln Hills Foundation, Lincoln’s Discovery Center, and pickleball coaching at a local elementary school.

This past year, Wheeler’s efforts resulted in three scholarships of $500 apiece for seniors graduating from Lincoln High School. The recipients were Alejandra Ceja, Penelope Garcia (class valedictorian), and Aaron Jackson. 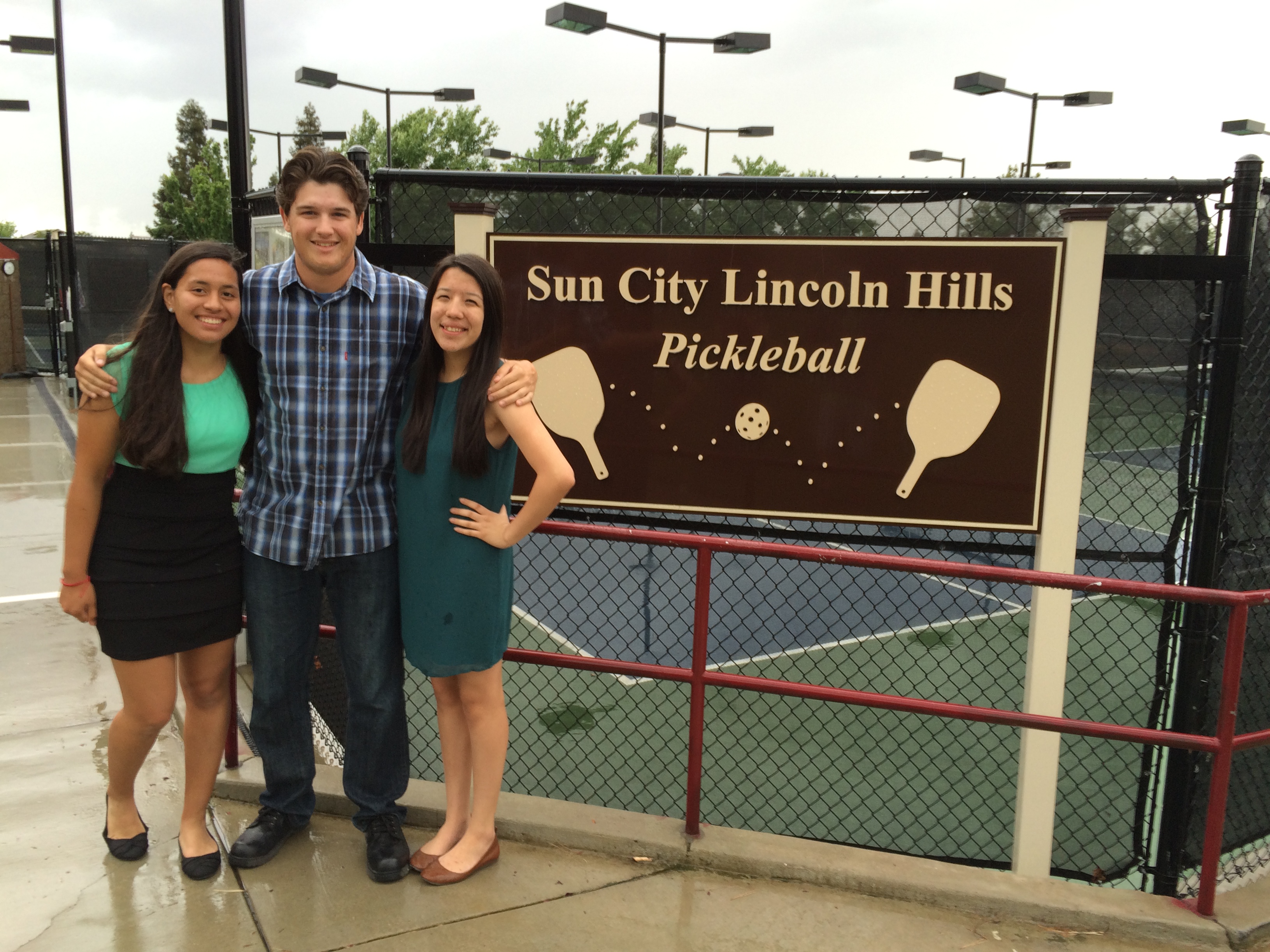 Three seniors from Lincoln High School were recipients of $500 scholarships each from the Lincoln Hills Pickleball Club: (from left to right) Alejandra Ceja, Aaron Jackson, and Penelope Garcia.

“These days I collect an average of about $150 a month,” Wheeler said. “So we’ll see what we bring in for next year’s donation.”

Wheeler’s hope is that the money will eventually be able to be used to help grow the sport in the city of Lincoln. “We’re working on getting public courts here and when we do, I’m hoping to use the money to help introduce new players to the sport by providing free paddles and pickleball clinics and other things like that for families who wouldn’t otherwise be able to afford them.”

The pickleball community has rallied around the idea, and now many people bring recycling from their homes down to Wheeler’s courtside collection bin. “I even have a few neighbors just drop off bags of recycling on my porch,” Wheeler said.

Wheeler has been playing since 2007 and is a charter member of the Lincoln Hills Pickleball Club, which plays on courts within the retirement community of Sun City Lincoln Hills. “We started with 30 members playing on basketball courts with portable nets,” she said. “Now we have 500 members sharing six courts. You can see why we’re eager to help the city of Lincoln embrace the sport and catch up with demand.”

According to Wheeler, court construction talks are underway and the hope is that she and her fellow residents will be able to enjoy new public courts in Lincoln within two years. Until then, she’ll keep collecting recyclables from her pickleball cohorts and using the money to donate to the community in the name of pickleball.