Manufacturers are always coming up with new ways to innovate with their offerings, but they typically do this by altering a single aspect of a paddle design. That's why we were particularly excited when Zach Scheller of Escalade Sports told us that the Onix Evoke Premier hadn't only improved one aspect of their paddles' traits, but 'almost every component [had] been redesigned—handle, edge guard, shape, etc.' 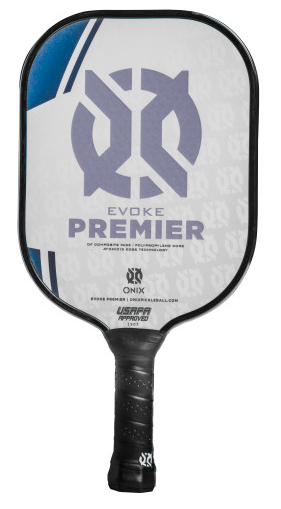 Of course, quantity of change doesn't always equate to quality, but Onix ensured the Evoke Premier would satisfy even the most talented of players by creating it in conjunction with pickleball national champions Matt Wright and Lucy Kovalova. These two pros were looking for both put-away power during attacks and stability for volleys and defense.

To accomplish this, Onix developed a paddle that disperses shock and increases swing speed. The Evoke Premier improves power without leaving the medium weight range and uses its 16' length to comfortably increase reach.

Zach gave us some insight into the specific design decisions that went into the Evoke Premier and why it's a fantastic offering for players who want power, speed and touch:

'We did a lot of prototyping with Matt and Lucy, some of which had outside-the-box concepts. We also used some machine tests, such as a tennis swing weight machine, to find its swing weight (or power).

'Out of all the paddles we tested, no paddle had as much swing weight as the Evoke Premier did, which was basically a full ounce higher than its actual weight. This means an 8 ounce Premier would have the momentum and power of a traditional 9 ounce paddle.'

Capturing the strength of a heavy paddle at a standard weight is impressive enough, but Onix has included even more beneficial features in the Evoke Premier's design. One example is the DF (density finish) face which inverts the finishing layer with a graphic.

'Most paddles have the graphic and then a finishing coat over it, which means the differences in color can make peaks and valleys from the graphic. The DF composite face not only creates a more consistent feel across the entire paddle, but it also decrease the amount of paint/coatings on the paddle face, itself.'

We were also interested in the Evoke Premier's Atomic13 edge guard which is said to disperse shock and increase power. This was done by using a unique material (most paddles use PVC) and essentially shrinking the walls of the edge guard and increasing its weight. This led to a decrease in vibration from the walls of the guard while improving its strength.

Zach adds that it's 'almost like having lead tape around the perimeter of the paddle.'

When asked what type of player is best suited for the Evoke Premier, Zach responded:

'While this paddle has a pretty broad following, we definitely see players who play a faster, more powerful game gravitate towards it the most. However, we’ve even had some players who like the control game love the play at the net, especially on volleys.

'[Compared to the rest of our line] it's obviously the most similar to the Evoke Pro, but players enjoy the Premier due to its higher put-away power and solid feel. Contrasted with our extreme control or touch paddles, like the Outbreak or Voyager Pro, it definitely has a different style and performance.'

If you're after a paddle that will adapt to offensive and defensive plays, has a flexible shape and will perform at the highest levels of competition, the Onix Evoke Premier may be the paddle you've been waiting for. Check out the Evoke Premier at PickleballCentral to experience how much power you can get from this paddle despite its trim weight.