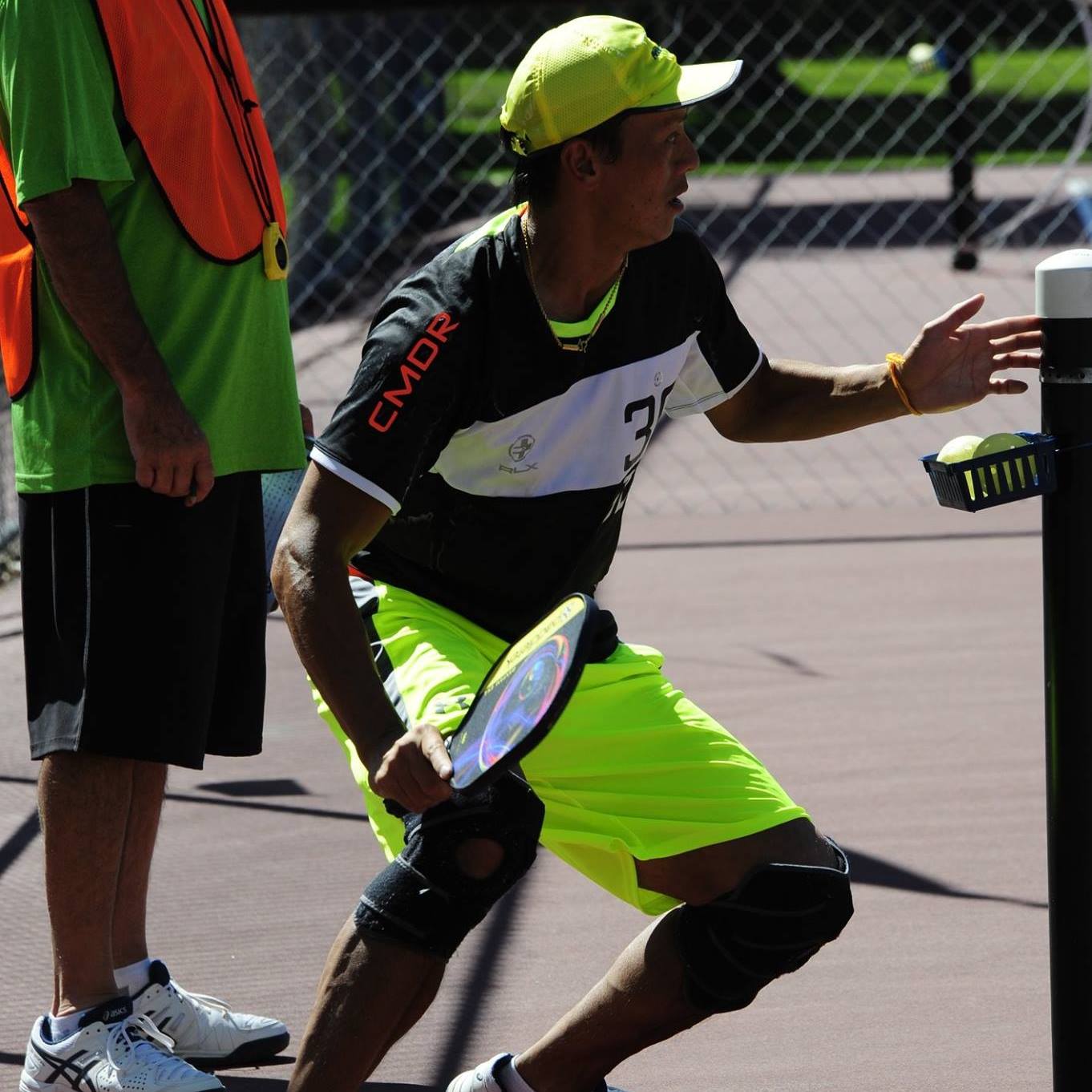 We are so impressed with the players who competed in the first U. S. Open Pickleball Championship held in Naples, Florida this past April. I'm glad to share some of the stories of the top players who are new to the game.  Enjoy!

I play with the Paddletek Bantam EX-L. After going through 3 paddles, I tried the Bantam and fell in love with it immediately. Good all-around paddle.

I heard about pickleball from my brother. He urged me to play the game. As a former pro table tennis player (Played in French national league in the early 90's), 20+ years of tennis, and a few years of Badminton and racquetball, he knew I would do good. I didn't pay much attention to it until 2 years later. I happened to walk by some local pickleball courts on my way to playing golf. After 5 mn of observing, a lady handled me a paddle and ask me to try it. I dropped my golf bag and got on the court. Everyone was shocked seeing how well I played for a first timer. I got hooked right away. 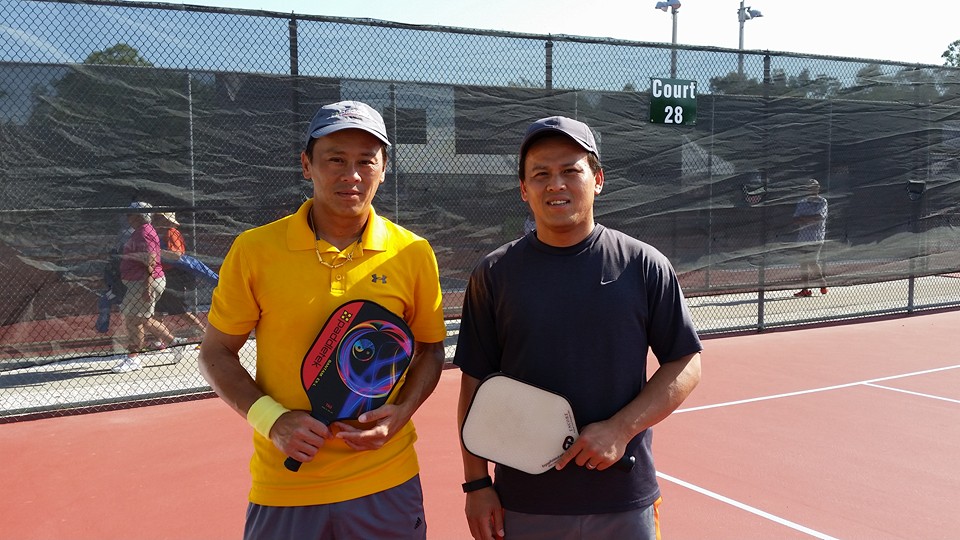 Tao and Tree U S Open. They took Silver in Men's Doubles.

Outdoors 100%. I don't like the feel of the indoor ball, too soft. It's more fun playing outdoors: the sound, the wind and the heat make it more interesting.

I prefer doubles. There are more strategies to it. Men's doubles, Women's doubles and Mixed doubles require different strategies as well. The kitchen is very important in doubles and it's what defines Pickleball.  Playing singles is like playing mini tennis, in my opinion.

There's nothing better than home courts. We only have 4 dedicated courts here in Grand Junction. Playing in high altitude is a plus.

There's no 'secret sauce.' I only believe in practices and drills if you want to improve, as simple as that. Even though I'm playing with 4.0 and 3.5 players all year long, I can still manage to work on a few aspects of my game. The only tips I have for players out there is to slow down a bit, emphasize ball placement rather than 'out of control' slams. Hit downwards on balls above the net and use drop shots for any balls below the net.

I'm a CNC programmer for an Aerospace company.

I used to play golf 5 days a week, but now pickleball is taking all my golf time! I put in an average of about 25 hours a week from playing, drilling and coaching players from our community. Making time for pickleball is easy for me since I'm single, oh yea!!

No rituals... All the sweat and pain I endured during practices should give me enough confidence. My grandma told me if I wanted luck, I should go in the restrooms and flip my underwear then go back out. I haven't tried that yet...

I don't have any goals really, I only wish to team up with some good players in the future. As for now,  I love to play the game and hopefully stay healthy.

The only thing I can think of is that top players should spend some time playing with lower rated players. It makes them so happy to be able to play with or against a top player. I'm saying this because I have experienced a few sour situations. The first time around, I was out of state, I tried to get into a game and the first response I got from one of the players was, 'This is an advanced court, intermediate or beginner is over there.' Ouch!!!  I walked away.  After seeing me play on the next court, they finally invited me to play with them. No need to tell you that I put my 6.0 hat on and crushed the field. Thank you very much! The second time around, again, I was out of state, trying to get into a good game. Same thing!'Are you a 5.0? This is only for 5.0 players!'Luckily this time, one of the players recognized me and allowed me to join. So far, the top players I have met are awesome, very nice and humble, so maybe I just happened to meet 2 stuck-up, low 5.0 players! 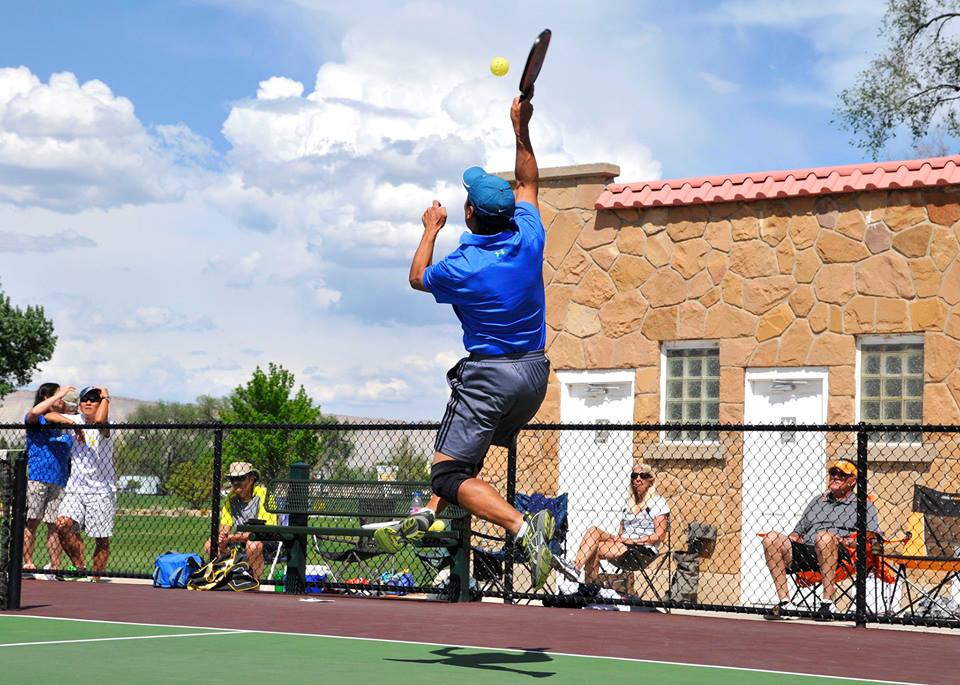 Thank you, Tao, for the reminder that we are all 'in it to win it' and that we should share our experiences with each other.  You are awesome!