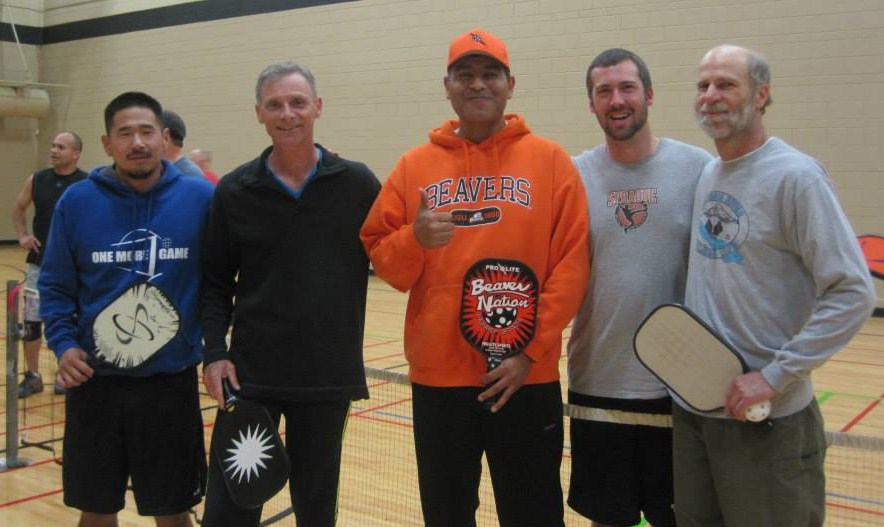 Pickleball Friends gathered at the SeaTac Pickleball Tournament, Paul Porch on the right

I use both a ZZT paddle made by Spike Christensen and a POP paddle made by Brian Jensen. Both paddles have short handles since I use a table tennis grip and a longer handle gets in the way. The shorter handle also allows for a larger hitting area.

I first played Pickleball in a PE class at Mt Hood Community College in 1982 but subsequently I was not aware of anywhere to play PB recreationally for more than 25 years. In 2009, I was looking for a sport that was easier on my knees than tennis and discovered Pickleball being played at the Firstenberg Community Center in Vancouver, Washington. Soon after that Mike Wolfe, whom I had first met playing table tennis, asked me to play in a Pickleball tournament.

I prefer to play indoors where the rallies, my knees, and shoes last longer.

Because of my knees, I only play doubles even though I almost exclusively played singles in tennis. As it turns out, the skill set needed for Pickleball doubles is a good fit for my athletic strengths at this point in my life. And with four players on the court the strategy is compounded which makes it more interesting.

For an outdoor tournament, I really enjoyed the Tournament of Champions venue at Gullo’s Grotto in Ogden UT. For an indoor tournament, the State Games of Michigan venue on the 15 courts at the MVP Fieldhouse in Grand Rapids MI is wonderful. And for “recreational” play, it is difficult to surpass the excellent competition at June Crabb’s beautiful indoor court in Oregon.

Utilize a practice partner for meaningful drills while focusing on placement and consistency in terms of depth in the court as well as direction. When playing competitively, play the percentages, be a positive partner, and have FUN.

I retired from teaching Mathematics to adults in 2005. Now, in addition to occasionally doing some work around the house, I occasionally instruct and coach Pickleball.

Since I am retired and have four good Pickleball venues within 15 minutes of my house, I play 2-3 hours most days, with some games being very recreational and others very competitive.

I hope to see the day when a player’s ratings are 100% objective, with three significant digits, and are updated immediately after every sanctioned match. With my mathematical background, I have researched and developed an algorithm, similar to those used in badminton, table tennis and chess that would met these three attributes, as well as having many other positive implications.


Anything else you would like to share about your experience being one of the best Pickleball players in the world?

I am honored to be added to the illustrious list of players on the Pickleball Central blog, lucky to have had the opportunity to play with many of the best players in the world, and fortunate to be playing Pickleball at this time in its development.