I've been chatting with Deanna Wright for about two years about how pickleball is taking off in Payson, Arizona.  You'll be delighted by this Payson pickleball success story. 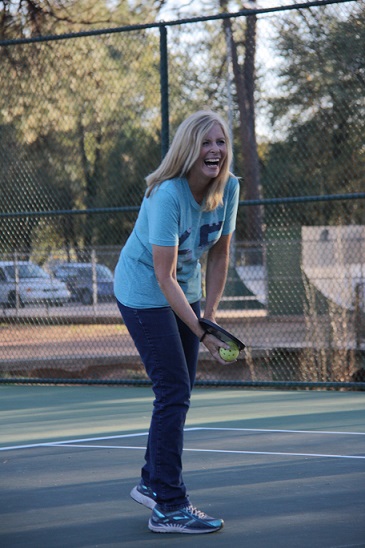 “We never dreamt in a million years we would ever get our own pickleball courts,” explains Deanna Wright. “We petitioned the Town of Payson for permission to put ½” tape down on two of the four existing tennis courts in town. We only wanted to put down ½ inch tape so as not to aggravate the tennis players too much. We chalk the court lines every day. The tape would last longer than a day. We begged for a year and a half.”

'They will be painting the courts soon. The kitchen will be painted in lime green and the rest of the court in a regular green.' Deanna’s huge circle of pickleball friends can hardly wait for the courts to be ready. Deanna has never played on a real pickleball court. She is pinching herself to make sure she isn’t dreaming.

Interest in pickleball has been growing in Payson, Arizona for the last 2 years.  As the story goes, Cindy & Phil Galvin told Dianne Wing about pickleball.  Dianne researched and taught herself the game.  One day, Mike Wing invited Deanna over to join a group playing pickleball. She was immediately hooked on the game. After about 6 months of playing pickleball, Deanna started teaching pickleball to anyone who showed an interest in the game. Just recently, she taught a church youth group and their leaders how to play pickleball.

Deanna is definitely a “Pickleball Spark Plug!” A lot of folks, most recently from Michigan, Missouri and Nebraska, are snow birds.  If they stop by to watch while Deanna and friends are playing, Deanna will walk over after a game and answer questions. Usually, they are open to trying the game. Nearly everyone who plays becomes addicted to the game.

Deanna has 2 sons. Logan is now 14 and very involved in Special Olympics. His brother Joshua loves sports and is an avid athlete. 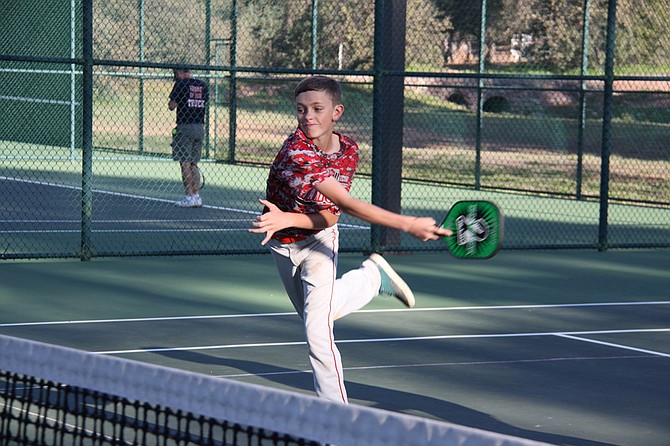 Joshua’s Little League friends and teachers come out to play too. 'We invite anyone and everyone to come join in the fun,' says Deanna. 'Playing sports is a great way to spend time with your children, get to know them better and know what is going on with them. Family time is mostly spent at a field or by a pool, but when we want to really engage in a sport that can be played as an entire family, it is Pickleball!'

Mike Wing designed a plywood tool with a hinge and a clamp that made it possible to hold the chalk they used daily to re-draw pickleball lines on one of the tennis courts in town. Plans to build pickleball courts in Chaparral Pines, a gated community within 5 miles of Rumsey Park are underway. “We are here to stay,' beams Deanna about the Payson Pickleball Club.

These folks are dedicated to the game.  Deanna shares, 'It’s so hard to go a day without pickleball. In January, Payson had 8 inches of snow. Dianne and I went out and shoveled snow for about 2 hours, just so when the snow melted, we wouldn’t have to wait so long for the court to dry!' 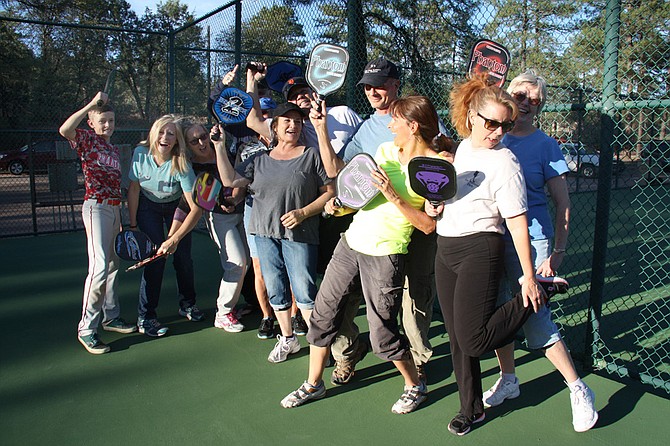 Some of the many people who stop by the Payson tennis courts to play pickleball during the week: Pat Patterson, Jodee Smith, Paul and Jacque LeSueur, Joel Dean, Jennifer Kiley, Mike and Dianne Wing, Maryse Vossler, Joshua and Deanna Wright. Photo by Michele Nelson, courtesy of the Payson Roundup.

The Payson Pickleball Club is steadily recruiting some of the other tennis players in town to try the fastest-growing sport in the country!

Thanks, Deanna, for sharing your story about your new pickleball courts in Payson!