Years ago David wrote this article for the USA Pickleball Association's newsletter. We're getting more and more questions on how to convert tennis courts to pickleball courts, so we thought we'd reproduce David's article in our blog.

If you have underutilized tennis courts - or basketball courts for that matter – you might want to turn to an up-and-coming sport that is uniquely suited to adding new life to old courts, pickleball.

Pickleball is a fun court sport played on a badminton-sized court with the net lowered to 34 inches at the center. It is played with a perforated plastic ball similar to a whiffle ball and wood or composite paddles about twice the size of table tennis paddles. It can be played indoors or outdoors, is easy for beginners to learn – but can develop into a fast paced, competitive game for experienced players. In addition to being fun, the game has developed a reputation for its friendly and social nature.
Pickleball can be played as singles or doubles. New players can learn the game quickly in a single session. No special apparel is needed – just something comfortable and appropriate for a court sport. Equipment is inexpensive and easily portable. The game can be played by all ages and is particularly popular in school P.E. programs and senior citizen hangouts.The popularity of pickleball is really being driven by seniors. The reasons they enjoy pickleball in many ways parallels the reasons that they can better utilize many tennis courts:
?

There are two paths to converting existing courts to pickleball courts: shared use and dedicated use.

With shared use simply add pickleball lines to an existing court and players of both sports can use the facility. This may cause some initial confusion, but players quickly get accustomed to the lines.

The simplest way to add one pickleball court is to just lower the tennis net to 34' in the center.   The center strap could be used to bring the net down to 34 inches in the center. If the tension on the net cord is very tight, the tension might have to be loosened slightly by adjusting the ratchet on the net post.  Another option is to purchase a Tennis Net Adjuster to lower the net for pickleball or you can do it yourself using two eye hooks, two expandable sleeves and some tie down straps, but first make sure and you  have permission to drill a couple of holes into the court surface . 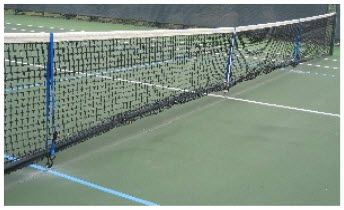 How to Adjust a Tennis Net to Regulation Pickleball Height 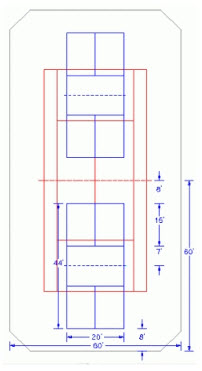 If the corners are angled, then two courts can fit very nicely as shown. If the conversion is temporary or it is desired to be able to continue to use the court for tennis, then portable net stands can be used for the pickleball courts and the tennis net can be left in place as a backstop for the two pickleball courts. 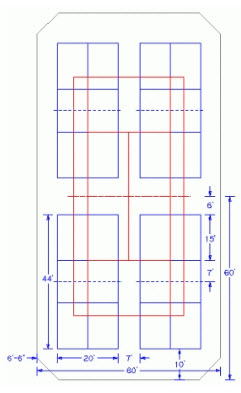 This diagram (below) shows 2 tennis courts that are permanently converted to 8 pickleball courts. If a single tennis court is converted, just refer to half of the diagram. Angled corners are squared off if necessary. If the tennis court is a standard dimension of 60'x120', that only allows 5 feet between the pickleball sidelines and the fences. That should be considered the minimum dimension. If space and budget allow, add some additional overall width. That will give the more active players more room and also give room for seating on the courts.
Conversions are happening across the United States with great success. 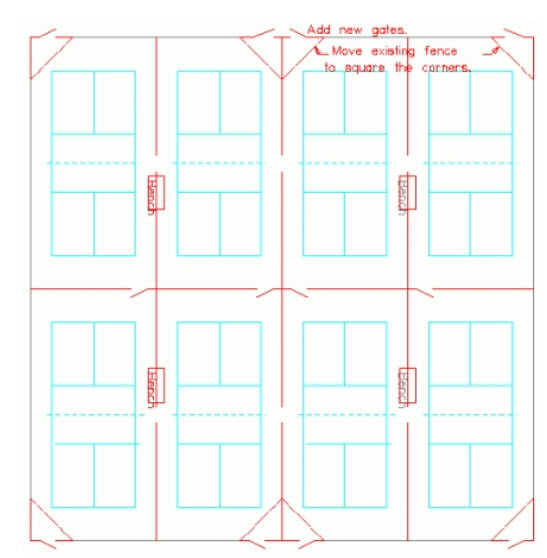 Stanley Volkens, USA Pickleball Association Local Ambassador for Southwest Ohio, and seasonal resident of Arizona, surveyed the 16 tennis courts in Middletown and found them greatly underutilized. Stanley approached the park board with a plan to convert two under-utilized tennis courts into 6 beautiful new and regularly used pickleball courts.
The Park Board gave Stanley and his pickleball players permission to convert 2 tennis courts over to 6 pickleball courts. The dimensions worked out perfectly. The courts have 14 ft. between them with 8 ft. at the ends. The tennis nets are the backdrops between the ends of the courts. The courts are laid out north and south. The pickleball players did all the work and paid all the cost ($3,956 total). They presented the new courts to the city with a ribbon cutting ceremony with park board and city council members.
Paul Barksdale and Rex Lawler, Local Ambassadors for Greater Terre Haute, Indiana played on the new Middletown courts in the SW Ohio Senior Games and were so impressed that they brought a similar plan back home. They found underutilized tennis courts and proposed a shared cost plan to their park and recreation department. The players raised $1500 to cover nets, posts, and other supplies and the park and recreation department agreed to provide the labor following the same step-by-step process and court format used in Ohio.In Port Angeles, Washington two deteriorating tennis courts were converted into six pickleball courts.
Originally donated to the city by the Elks in 1951, the $30,000 conversion cost was shared by the Elks and the city. The courts are now often maxed out with 24 players at a time having a fun and getting exercise.The USA Pickleball Association has over 300 local ambassadors who are ready and willing to assist with the development of more pickleball courts and community involvement efforts.Pickleball is a great sport for seniors but is also popular with all ages. Just witness a heated inter-generational game and you will see why this sport with a funny name is becoming so popular.
By David Johnson, partner at PickleballCentral.com and former Media Relations Chair for the USA Pickleball Association.