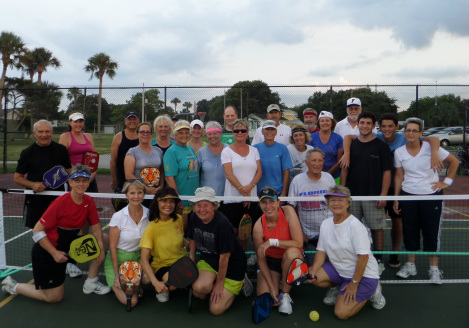 Pickleball by the Sea is a recreational club of Pickleballers who play at Jarboe Park in Neptune Beach and Isle of Palms Park. They believe Pickleball is not just fun, it's good for both your body and your soul!

Verna Griffin was introduced to pickleball in October 2012 by friends from Virginia. She loved the game and wanted to share it with others in her Neptune Beach, FL community. Here's a month by month summary of how she shared a game with three other people and how this group went on to form a club, Pickleball by the Sea,  that would grow to two hundred people in just twelve months.

January -  Pickleball started with one person, Verna Griffin, inviting three other people to play pickleball on a cold afternoon at a local park. Verna provided the pickleball equipment and explained the rules of the game to the others.

February - The first club newsletter was sent to 24 people.

March - The number of people participating in the game increased with each day of open play. Additional courts at the park were painted by volunteers.

April - The local newspaper ran an article about Pickleball and the Pickleball by the Sea club.  An open clinic was held at the park with nineteen volunteer helpers. Twenty seven newbies took part in learning and playing the game.

May - Pickleball by the Sea was featured on the front page of the South USAPA website. A local retirement community hosted a pickleball clinic. A local company donated some pickleball equipment to the club.

July - The heat of the summer and long hours of daylight motivated the club to move the time of play to the cooler morning hours.

August -  Pickleball players from other states visited the club.

September - A local country club was closing and club members approached the country club about possibly donating their wind screens for the park's pickleball courts.

October - At the Senior Games of Jacksonville, Pickleball by the Sea club members placed in each division. (Not bad for a new group of picklers.) Another park started offering open play once a week.

November - Volunteers removed the wind screens from the country club and install them at the park for the pickleball courts. A second clinic was held at a retirement community. More pickleball courts were developed nearby.

December - The PickleGram newsletter is delivered to over 200 individuals via email. Over 400 local people have been introduced to pickleball. In a short year pickleball is now available every day at one or more of  eight local pickleball venues. The 1st Annual Mistletoe Pickleball Tournament and Social is planned for December 14th in nearby St. Augustine, FL.

What's happened to your pickleball club in 2013? Share your success and failures with us, email anna@pickleballcentral.com. Let's learn together how to share pickeball with more people because, as the Pickleball by the Sea club says, 'Pickleball is not just fun, it's good for both your body and your soul!' - Anna