I was curious! What are the main reasons for offering to hold a pickleball tournament? So I started asking folks who have held tournaments recently. Chuck Radtke and Steve Dennis have graciously taken the time to share some of the story behind the Northwoods Pickleball Tournament in Three Lakes, Wisconsin. Enjoy!

If you are ever in the neighborhood of Three Lakes, Wisconsin, you absolutely have to stop in and play pickleball! Three Lakes is the only community in Wisconsin that offers a chance to play pickleball 7 days a week, 24 hours a day. Their lighted courts and the screens around the courts allow anyone in town the opportunity to play pickleball, any time of the day or night. 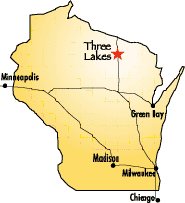 #1 Best Reason to Hold a Tournament: A Great Location

Three Lakes has 8 outdoor courts that are screened and lit for 24-hour play, and have an additional 8 courts available for indoor play when the weather gets bad. They have a good working relationship with the local schools and the rec center. In the summer they will have people playing pickleball from age 7 to the low 80’s.
The town of Three Lakes entered a contest 5-6 years ago and won the distinction of being the Single Best Town in America. Three Lakes is a part of the largest chain of lakes in North America. There are 27 lakes altogether, including the Eagle River system. The population of the township where Three Lakes is located is about 2000. Throughout the year, sports enthusiasts often double the population, except for the “Mud Season,” with fishing, hunting, snowmobiling and summer lake activities rounding out some of the offerings. 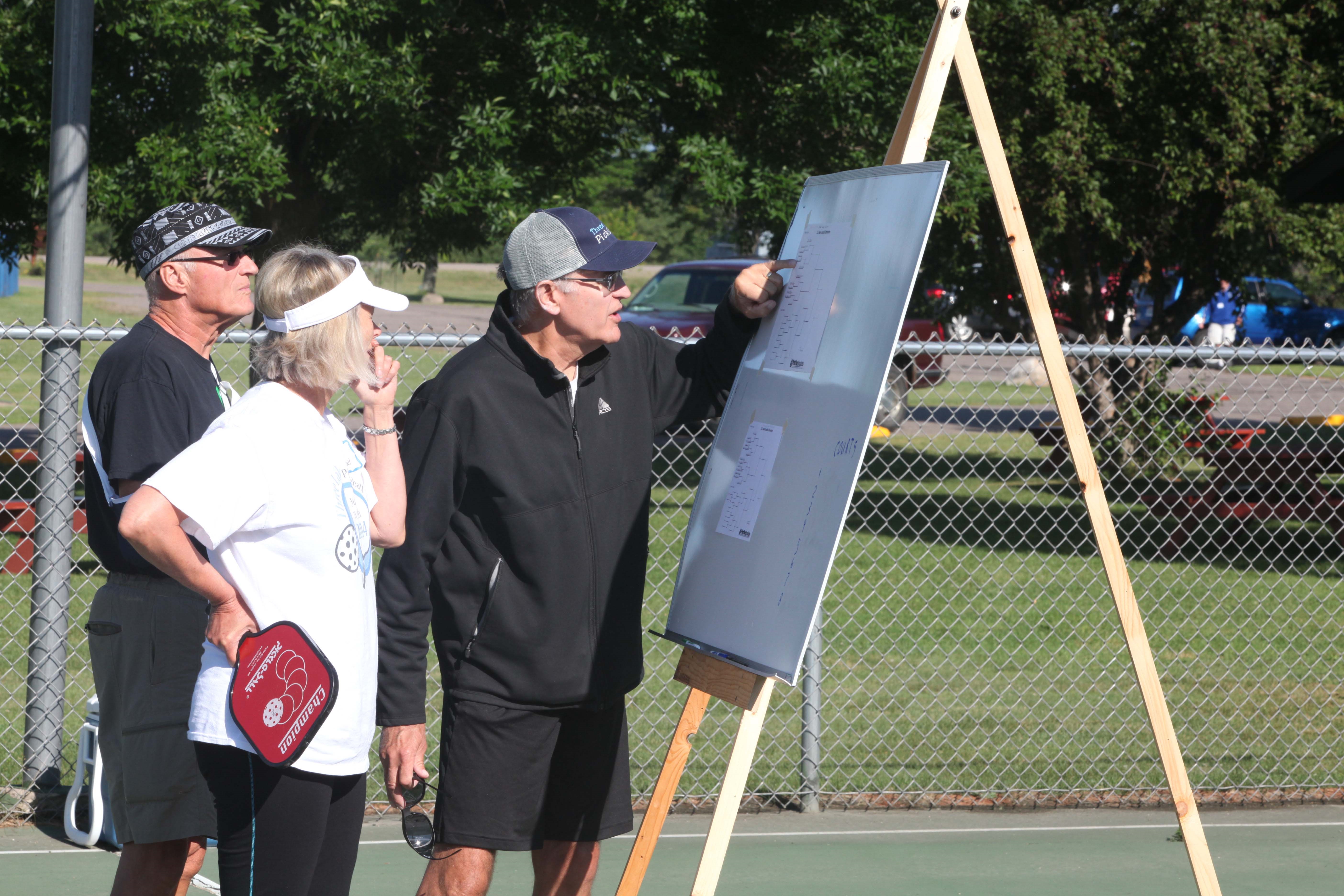 Chuck Radtke checking out the schedule with tournament participants

There are two cool people in Three Lakes who are the energy behind the Northwoods Pickleball Tournament in Three Lakes: Chuck Radtke, who has been playing about 3 years and Steve Dennis, USAPA Ambassador. Steve played tennis before Chuck introduced him to pickleball. After the first couple of times playing, he bought a couple of paddles and since then has been hooked for life. He became an ambassador after about a year to keep connected with the greater pickleball community.
In the summer of 2013, Chuck and Steve introduced Pickleball to the schools. They scheduled 1 day a week, and the school arranged their Physical Education schedule to allow community pickleball during the day. These guys are very creative. They are always coming up with ideas to promote the game of pickleball in Three Lakes.
A year ago, during a high school basketball game during half time, they did a pickleball demonstration with a portable net and the vinyl EZ Court Lines. Chuck did the announcing while others community members demonstrated the game. It was fun. A lot of folks had never heard of pickleball and the demonstration actually got a few new folks out to try it.

Another fun thing they did to bring attention to the game: at the 4th of July parade, which draws folks from towns all around the area, they marched in the parade and did pickleball drills. One time they even had someone (Chuck) dress up as a pickle. So they marched in formation, bouncing pickleballs, and they did a marching drill chants, like:

Pickleball is here for you -
Come to Burnside 'n' play today. 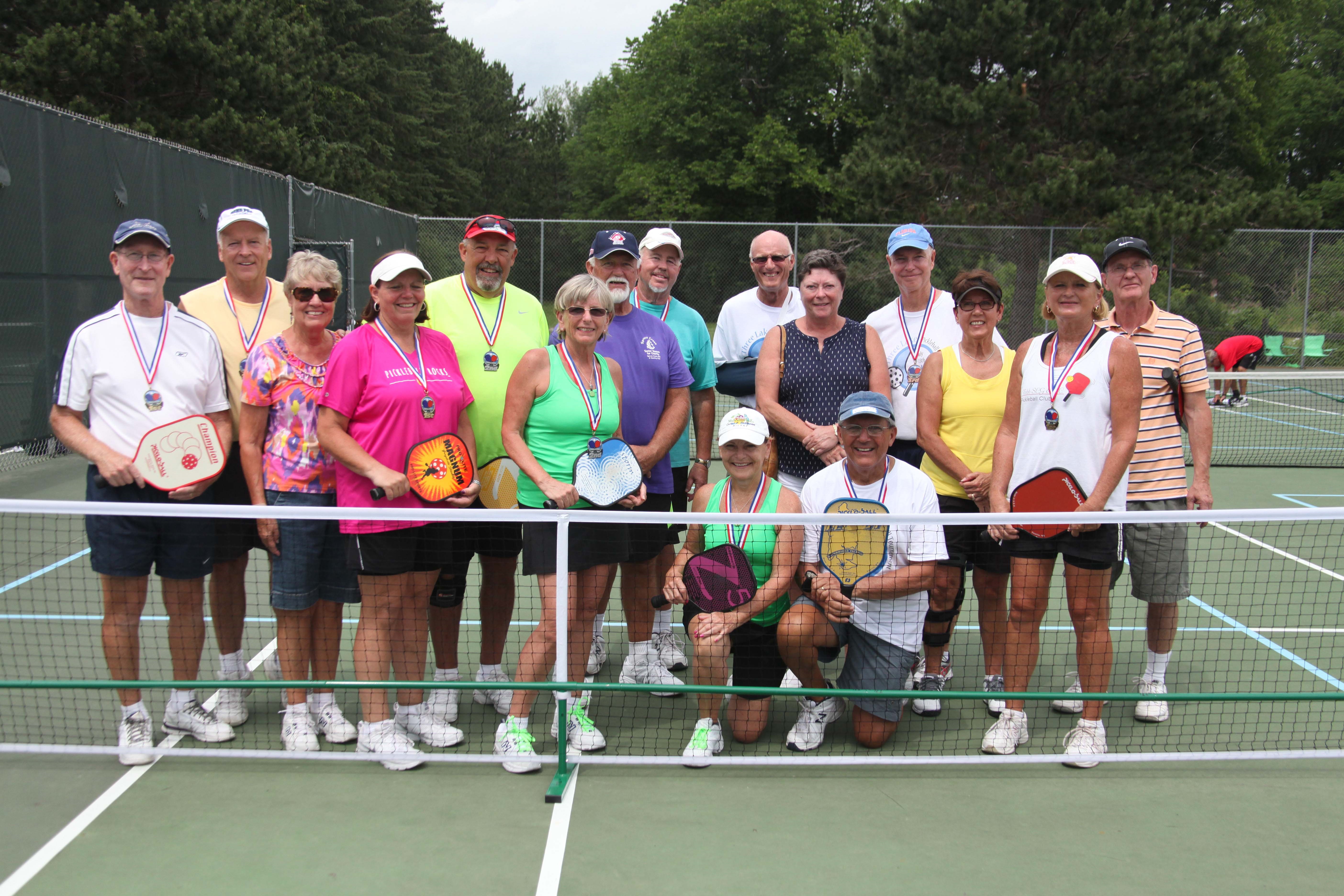 A Group from the Villages, Florida who came to the Northwoods Tournament

The town of Three Lakes is very supportive of pickleball, especially the Three Lakes school district and the Parks and Recreation department. Play is coordinated every day at all locations. Not as many folks play in the morning as in the afternoon and evening. They have 150 on their email list.

People in Three Lakes like to support their Green Bay Packers, so, when there is a game, they adjust their pickleball schedule. If the Packers game is in the morning, they shift pickleball into the afternoon. If the Packers play in the afternoon, then they play pickleball in the morning. Three Lakes folks are more sociable than other places that Steve has played. If folks are gone for a while, the local players always make a big deal of welcoming them back to the game. He’s had experience in places like Florida, where folks tend to be more competitive. Chuck and Steve are also Russell Wilson fans (Seahawks quarterback) because Russell went to college in Wisconsin.

Pickleball community members provide wood paddles made by a local carpenter and provide demo paddles for people to try. They charge a little more than what is needed to cover expenses in the tournament registration fee, and the extra funds go directly to support pickleball in the community. It helps with the purchase of nets, balls, and other equipment so that pickleball can remain free to the community.

#4 Reason to Hold a Tournament: Participants Looking for a Friendly, Sociable Competition 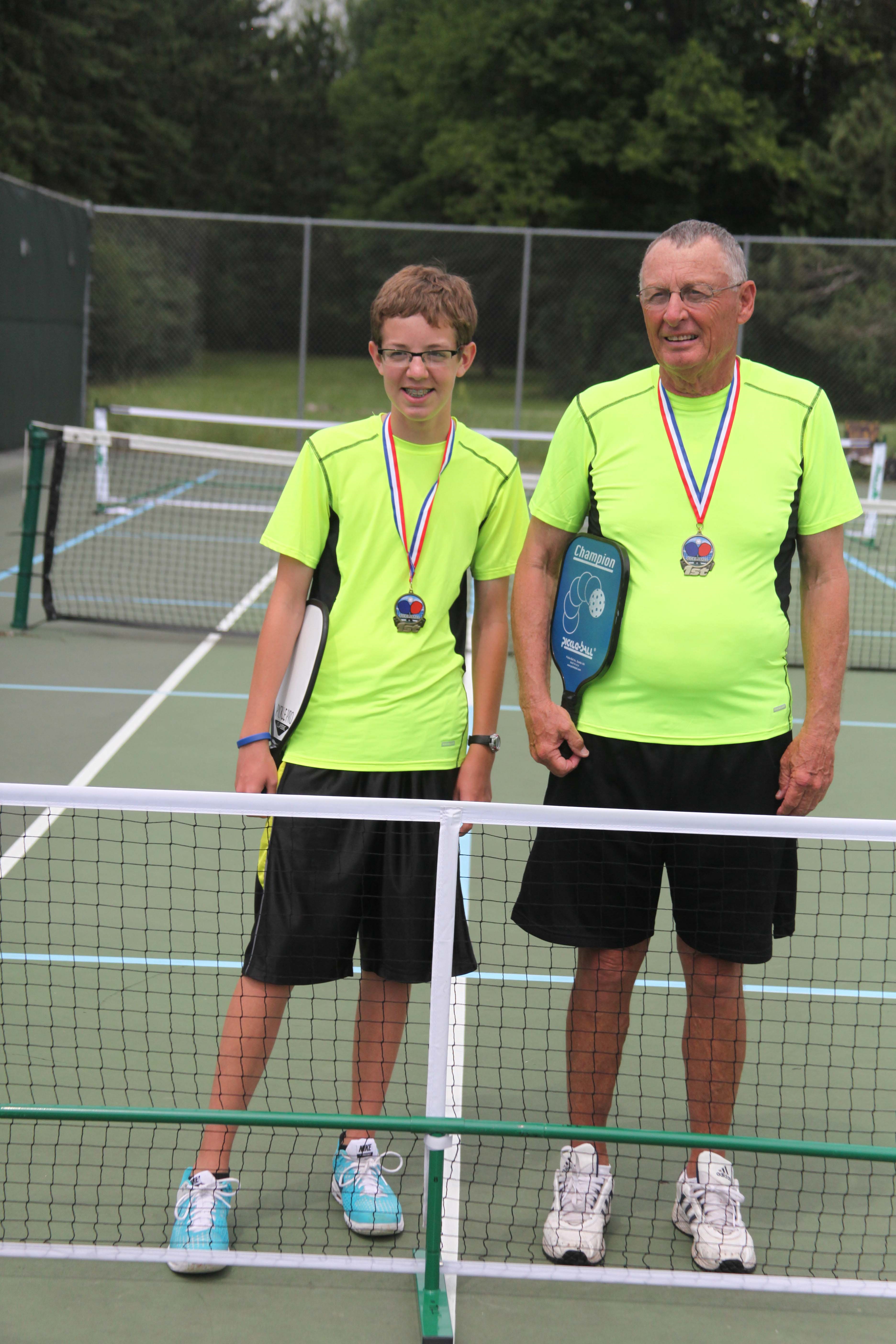 In the summer of 2014 they held their first non-sanctioned tournament. Because it is not sanctioned by the USAPA, they are able to keep it open for everyone to participate. There were a few folks who turned out for the competition, but most were there because of the social aspect of the game. So far they haven’t had to use the indoor courts much for their outdoor tournament. In July 2015, Coach Mo and his assistant came and conducted 3 days of clinics in Three Lakes after their tournament. The 3rd day of the clinics, they had to use the indoor courts because of inclement weather. This year will be their 3rd tournament.

Responses for their tournament draw from 8 different states, involving 120 players. Their 3rd Tournament is this July. Their press release for the tournament is going out this Friday. They expect at least 120 pickleball players this year as well. The tournament is open to all and both men and women of all ages and skill levels have the opportunity to compete. It is not an elimination tournament, rather round robin, so everyone has a chance to play up to 7 times. In the last tournament, 2 men entered with their grandsons. Steve competed in his first tournament and lost all 9 times, but he still had a lot of fun, because all the folks he played with were so friendly and sociable.

#5 Reason to Hold a Tournament:
A Community With a Heart for Pickleball

The Northwoods Pickleball Tournament is offered under the umbrella of the Three Lakes Parks and Recreation Department so they don’t have to set up their own 5013c. All the money from the tournament, after expenses, goes to support pickleball and make it free to all who want to play. Chuck and Steve also actively solicit sponsors for the Northwoods Tournament each year, and anyone who pays the $25 fee gets their company listed on the back of their tournament t-shirts. 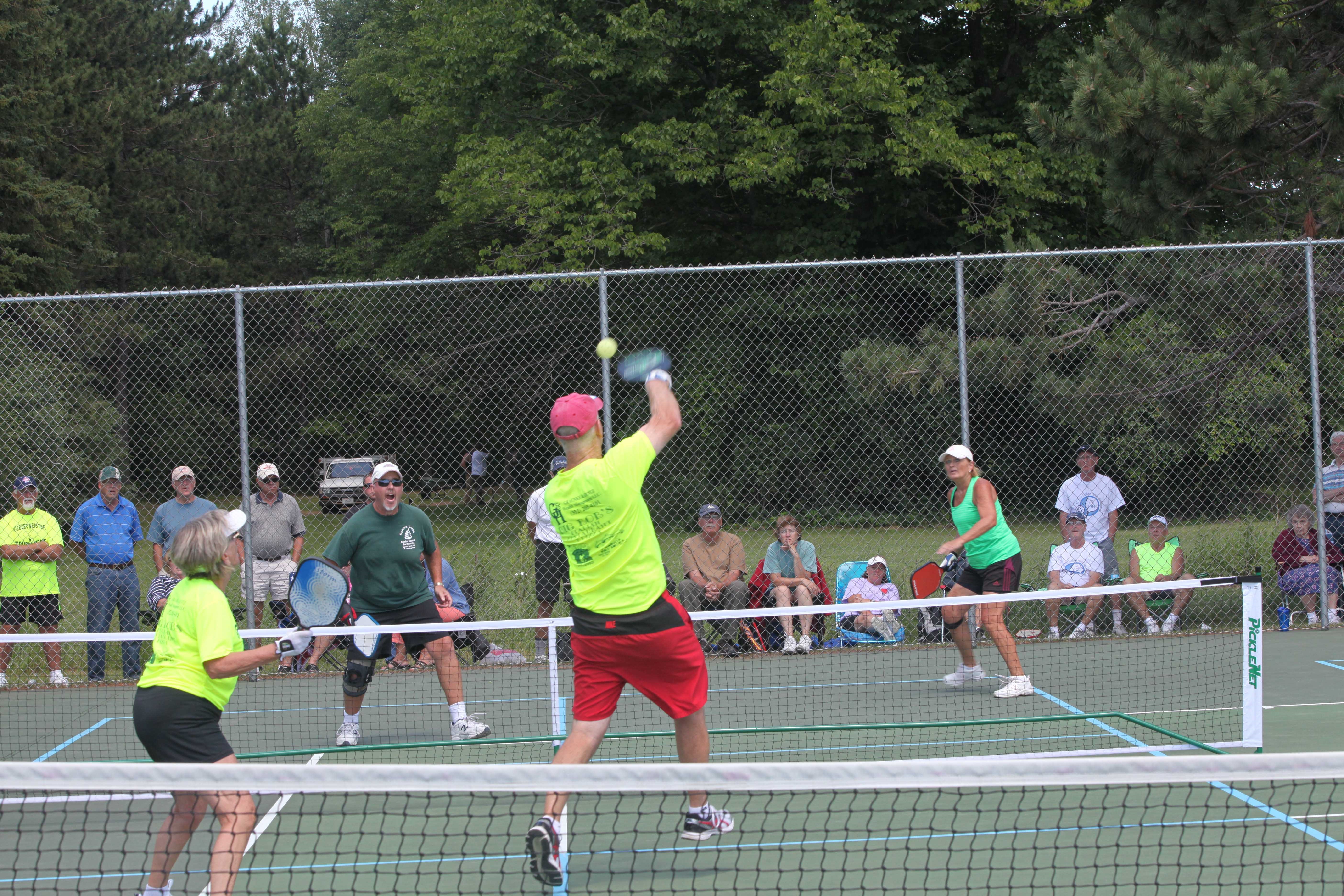 The Three Lakes community certainly does have a huge heart for pickleball! Make sure you stop in if you are in the neighborhood!

For more info, go to the Three Lakes Group site (pickleball info at the bottom).